Well that is at least encouraging because let’s take a look at last night’s numbers and all puke for a second. 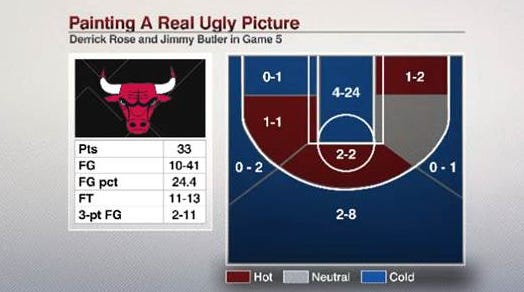 8 for 27 on shots that no one is guarding, that’s so horrifically bad. Just an awful awful night of basketball from the Bulls. Now I’m not panicking about this series, the Bucks are a mediocre team, a bright future but a mediocre team right now. They play great Defense and make other teams play poorly but at the end of the day the Bulls are the better team, straight up. With that said though, you couldn’t have watched last night’s game and thought that was a team that can beat the Cavs. I don’t know what the answer is, I’m not sure there is one this late in the season, but fuck did that look bad. Need a lot more urgency, a lot better Defense, and a lot less sloppy play on Offense. I want to be excited for the series against the Cavs, and I’ll get there, but last night’s stink will stick with me for a while. Championship teams close out at home against a 41-41 squad, that’s just a fact.