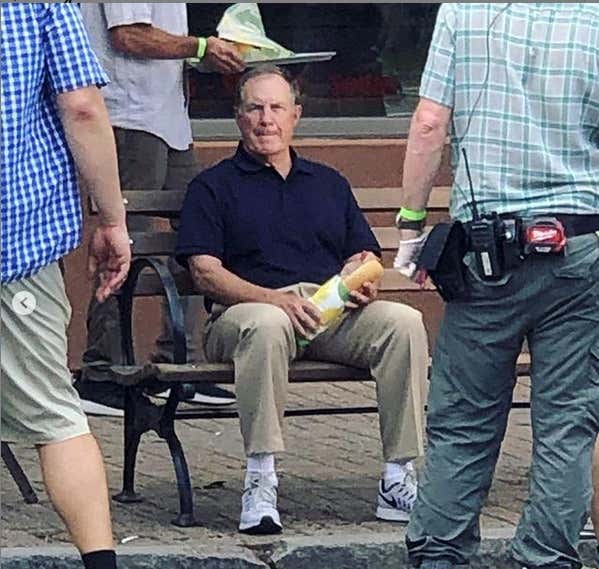 For my entire life I've been hearing that because "The sun never sets on the British Empire," the Queen of England is the richest land owner in the world. That is no longer the case. Not because Elizabeth had to sell a bunch of castles to pay for her creepy, pedo twat of a son. But because she's been passed on the list as of today.

It's official. No one owns more real estate anywhere on Earth than Bill Belichick owns in the heads of his - and I use the term very loosely - competitors.

Yup, this is all him. It's his latest nefarious plot to continue his world domination. He's been working the texts ever since the Opt Out clause was agreed to. Carefully hand selecting the players he'd like to take a leave of absence.

And that last one is actually quite true.

Of course the true conspiracy theorists, the ones suffering from moderate-to-severe Patriots Derangement Syndrome, are chalking this all up to Belichick realizing that 2020 is already a lost cause. And all these voluntary furloughs are part of a larger scheme to Tank for Trevor Lawrence. Which should qualify as a medical condition to get you admitted to a psychiatric ward.

Anyone who thinks Belichick sees no other way back to the top of the mountain in a post-Brady world except to dig through the planet core and out the other side is deluding themselves. Belichick was winning championships when Lawrence was in diapers and he'll keep finding ways to win them when he's in a Jaguars jersey or a Hall of Fame jacket. His team was 12-4 last year with an injured wide receiver corps, and underperforming Brady and no tight ends. And the sooner this anonymous, terrified NFL executive who's panic-texting Schefter realizes he's planning on making another title run with the better of Cam Newton or Jarrett Stidham this year, the better that poor, timid soul will be.

Here's what will happen. According to @CapSpace, THE foremost authority on this topic, the six opt outs today took the Patriots salary cap from somewhere just under $8 million to now $24,735,302. Three weeks ago, they were around $650,000, which was by far the lowest in the league. Now they are third highest. (And slated to be fifth highest next season.) Believe it or not, there are still quality free agents still left unsigned, at areas of need. Jadaveon Clowney. Everson Griffen. Snacks Harrison. Not to mention players seeking trades, like David Njoku:

The Patriots personnel department is not going to find itself suddenly flush with all that cash and just put it in the rainy day fund. They will spend almost to the cap as they do every year. They're going to turn the negatives of losing Dont'a Hightower, Marcus Cannon, Pat Chung and the others and turn it into a positive. To go shop for the groceries that were out of their price range a month ago but no longer are.

So this anonymous executive and the rest have every reason to be afraid. Even when things don't go right for the Patriots, they still transpire according to the Dark Lord's design.