In 2012 I flew up to Kandahar Army Base in Afghanistan for some quick work stuff & while I was there Toby Keith happened to be playing a USO concert. The genre wasn't quite my cup of tea but I appreciated literally any entertainer taking the time to visit & break up the monotony of the days. I'm somewhere in the crowd up there sticking out against the Army in my Marine desert camis, but singing along to Red Solo Cup & daydreaming about the next time I'd have a cold beer like the rest.

Cue a day or so later when I got back down to my own base in Helmand Province, there Toby & the band was again. I was, like, pretty much a roadie at this point & got more Toby Keith in 48 hours than I'd had my whole lifetime. Corny as it may sound & endless quagmire aside, "'Cause we'll put a boot in your ass, It's the American way," really does slap different in-country when you're chugging the Kool-Aid. Be it comedians, musicians, celebrities, pro-team cheerleaders, etc. the USO visits are genuinely special.

I'm grateful for that unique experience (they were a delight) but if there was one USO performer I wish I could transport myself to also go see, it'd be the late Robin Williams. I know others blogged about him this week on what would have been his birthday, but we spoke about his care for the troops on today's episode of ZeroBlog30 and I wanted to share a little more.

Anecdotes from the USO site:

“There were these guys behind a fence, across a berm [and] a field, and they waved at him,” said USO Vice President of Entertainment Rachel Tischler, recalling her time with Williams during the 2007 USO Chairman’s Holiday Tour. “And he jumped across the berm and went running over to them. Obviously, our security team completely freaked out. Again – height of the war here. But he didn’t care. He just wanted to go over and shake their hands and thank them. And that is what he was like.”

“He talked to [troops] who had gone through [Alcoholics Anonymous] backstage,” said USO Senior Vice President John Hanson, who also went on the 2007 tour. “That was the most remarkable thing. It happened in Kuwait, it happened in Iraq, it happened in Afghanistan. People would seek him out and he would take the time to talk to them.”

And from Time Magazine:

Jim Garamone, a writer for the Pentagon’s internal news service, wrote Tuesday of the comedian’s caring and compassion for those fighting the nation’s wars:

At the end of every performance—be it a combat outpost or a forward operating base—Robin was always the last entertainer to leave. In Iraq, a group of Marines came in from patrol and missed his show. He made it a point to meet with them and give them 20 minutes of fun, even as the chopper’s blades were turning to go to the next show.

In Afghanistan, the “clamshell” at Bagram Air Field was a favorite venue for him, and he performed there many times. In 2010, he started the show with “I love what you’ve done with the place.”

He was not a prima donna. One time a sandstorm grounded the party at an outpost near Baghdad. Robin along with everyone else crammed into a small “tin can” to spend the night. The next day his jokes about snoring and gaseous emissions pretty much convulsed everyone.

One of the notes I saw over & over was that he made each performance personal so the audience felt like he knew what they were going through. Before the show he'd observe the surroundings & talk to people gathering bits of information about the base that he could put into the bit. And to know how huge he was at the time, and that he was still putting life on hold to do this & to tailor it to each group had to have meant so much to those who saw him. I imagine morale after his shows was at all time highs.

If you want to hear more check out today's ZeroBlog30. 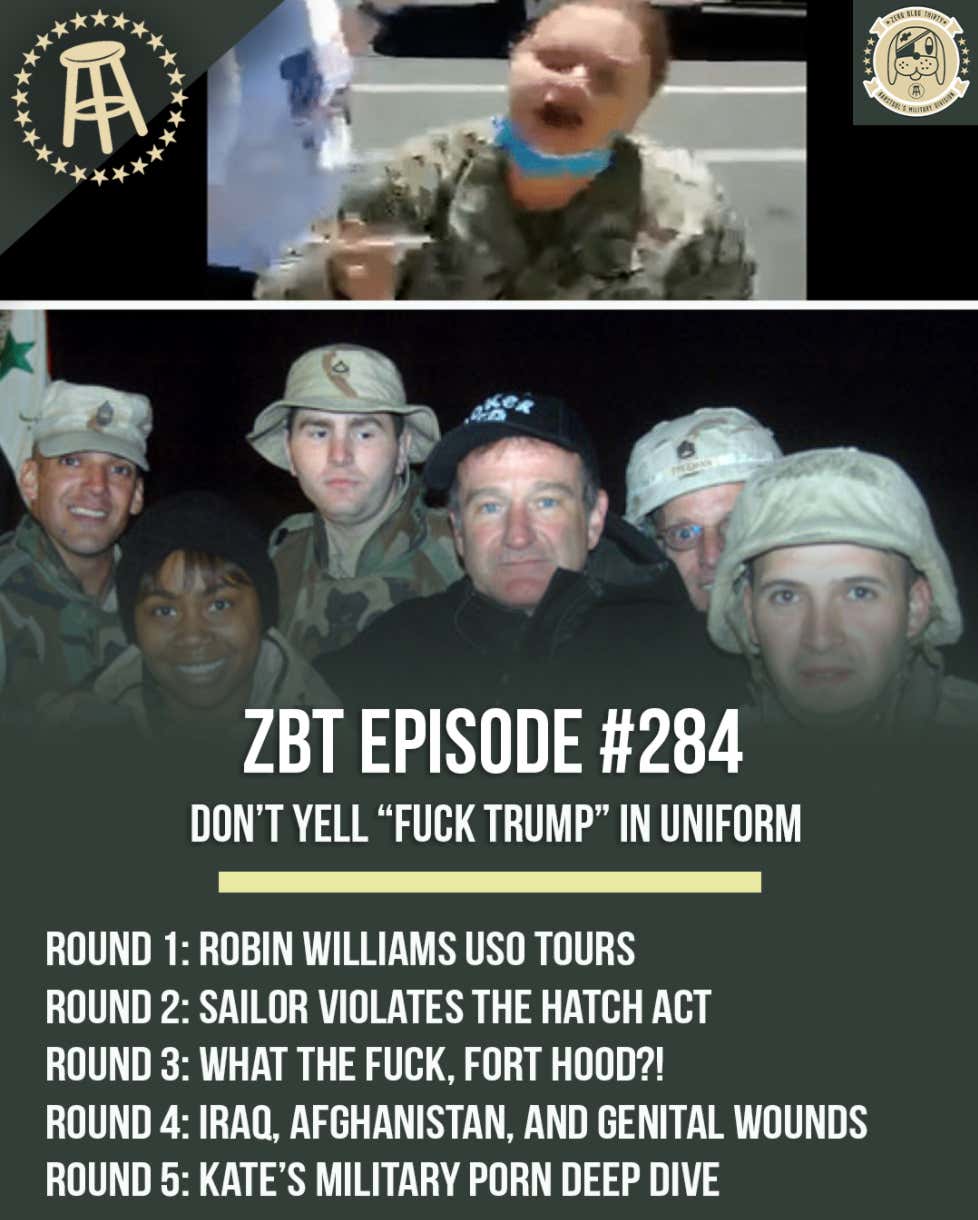