Hoping to avoid another high-profile confrontation between police and protesters like the clash that happened last week, Mayor Lori Lightfoot ordered the statues of Christopher Columbus removed from Chicago’s Grant and Arrigo parks overnight.

Not all Italian American leaders in Chicago are on board with the decision, but it has received the blessing of some groups, sources said. By taking the statues down, Lightfoot may draw criticism from those who believe she caved to activist demands.

So Lightfoot went and removed the statue of Christopher Columbus even though she said she wouldn't previously. Why this statue has become such a flash point of anger I'll never understand. It's a piece of metal of a guy that has been dead for 500 years. Tearing him down isn't going to change what happened. Maybe, I don't know, advocate and protest for changes that can actually help people now or in the womb of time.

Having said that, why did anyone think it was a good idea to have a statue of Columbus to begin with? The guy was a dumbass in addition to all the..ya know...genocide and rape. We talked about this Dogwalk over a year ago.

Two part episode because there were a whole mess of people who landed in America before Christopher Columbus. He was the only one dumb enough to think he was in a completely different place. AND...he never even fucking landed in "America". He was a beach bum just island hopping in the Caribbean. Knocking on every island door and asking "hey, is this India?" and the natives were like "nah, you're in Cuba". So then Christopher Columbus got pissy and just started spitting small pox into their mouths. Bad guy, dumb bitch, doesn't need a statue.

And yet, from the time we were 6 years old we get told about how in 1492 Columbus sailed the ocean blue. Columbus this, Columbus that, statues everywhere. Columbia University. District Of Columbia. Everything is named for him and everyone knows his story. Then if you say the name "Amerigo Vespucci" people have no idea who the fuck you are talking about even though the entire Western Hemisphere and our country is named after him. This guy 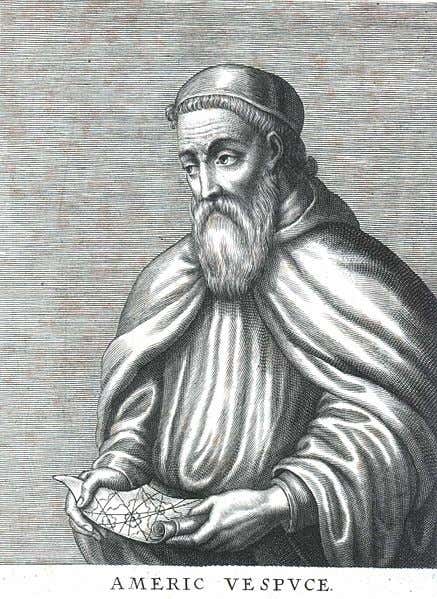 He started sailing to America right after Columbus. Big difference was that he knew it was this entirely different place. Hard to claim you discovered the New World if you thought you were in the Far East. Vespucci made four voyages to North and South America for Portugal. Set up shop. Brought Europe to the Western Hemisphere. Was he a bad guy? Probably. Historically, everyone was a piece of shit and in 100 years people will say we were pieces of shit too. That's just the way progress goes(hopefully). Was he bad enough that he shouldn't have a statue? Well, nobody really knows because there's not a ton of official records according to wikipedia

Vespucci has been called "the most enigmatic and controversial figure in early American history."[42] The debate has become known among historians as the "Vespucci question." How many voyages did he make? What was his role on the voyages and what did he learn? The evidence relies almost entirely on a handful of letters attributed to him. Many historians have analysed these documents and have arrived at contradictory conclusions.

So because we can't confirm that he was a real scumbag and we do know he came to America on purpose, give all the Italians who are upset about the Columbus statue being removed a new and better folkhero. Give them Amerigo.