I can’t even imagine having to wake up today if the Hawks hadn’t pulled that one out. Last night was the first time I’ve ever been to a triple overtime game. They say there’s nothing better than playoff OT hockey, and that’s true. But there might not be anything worse than triple OT at 1:30am. The crowd was kind of lifeless by the end and since alcohol sales ended in the 3rd period the whole stadium was that tired sobering up/on their way to a brutal hangover that makes you just want to be dead. I’m actually kinda pissed at Nashville for fighting that hard. Enough already. Y’ALL are dead. No Weber, you’re not going anywhere. A people should know when they’re conquered. Then…bang. Nice pressure by Richards, Bickell to the front of the net, and Kane finds Seabrook for the winner. So, like everyone in town, I’m gassed. Get ready for a blog with more grammatical and spelling errors than usual.

SEABS!!!! I’M GONNA PICK YOU UP AND…nope, nope. I’m tired and you’re kinda fat so I’m just gonna hug your leg while you pat my ass.

First star of the game: Scotty Darling. What more is there to say about the guy?  He’s seeing everything, he’s big, he’s a big time athlete in goal, and he makes it look easy. He makes the spectacular look routine. He had another 50 saves last night and is playing at a Conn Smythe level here in the first round. .969Sv% and a GAA of 1.05. I’ve been saying for a long time that I think he’s the better goalie and now that he’s finally gotten his chance he’s running with it. I actually feel bad for Crawford. Crow, for all of his blemishes, has had a really solid career for the Hawks and now 4 bad periods has turned him from All-Star Game starter to a backup. To his credit, Crawford appears to be acting like a model teammate in a difficult situation. He could pout and rock the boat, but instead his putting on a smile and trying to help the team win. Darling is the guy though. Looking back now. Thanks for the memories, Crow. 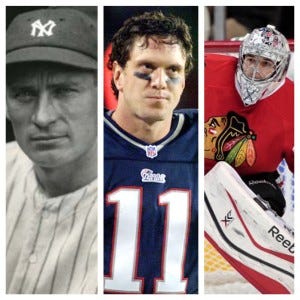 –I don’t know what to do about Kimmo Timonen. In a game that was 100 mins long, Kimmo played 12. I am starting to wonder if he really is on some kind of health restriction that limits his minutes because I don’t think he’s played more than 14 since coming to the Hawks. He’s been pretty solid when on the ice. Battles hard, makes the simple play, has yet to get burned. If he can’t stretch his minutes to like like 17 as we go along the top 4 guys are going to get burned out.

–Kris Versteeg is another confusing guy. He was trash for the majority of the game and was eventually benched in the 3rd/OT1 and Kane was skating with Bickell and Richards on the “2nd line” and with Kruger and Desjardins on the 4th line. Then, Coach Q put Versteeg on the 4th line and he looked good again. Maybe I was delirious, but sometime after midnight Versteeg looked like he had some jump and played a simple, straight line game. He added some much needed skill to that 4th line and they were effective in OT. I wouldn’t be surprised if Q goes back to Turbo or Nordstrom in game 5.

–Vermette was really good last night. He finally scored his first goal as a Hawk, but he was good all over the ice. Sound defensively, good along the wall, and really good on the dot. He won 60% of his draws last night. I liked the Sharp-Vermette-Shaw line. That combo has a little bit of everything.

–Saad-Toews-Hossa continues to be the best line in hockey. Best offensive line and the best defensive line for the Hawks. Such a luxury to be able to put them out against anyone and feel like you have the edge no matter where the puck is on the ice.

–Duncan Keith isn’t human. He’s some kind of machine. When I talked about Kimmo’s lack of playing time being taxing on the top 4 I didn’t really mean Keith. That was about Oduya, Hjalmarsson, and Seabrook. Keith can seemingly play forever. He’s a guy that’s great every night, but always steps his game up in the playoffs. One of the 3 or 4 best defensemen in the world.

–I’ve been watching hockey a while now(since 2010…ha, stole that from you comment section) and I’ve never seen a goalie lose the puck in his gear like what happened to Rinne last night. The ref basically did a cavity search.

–The only person in the stadium that had energy after the first OT was this 5 year-old in my section. Literally chanted “Let’s GO HAWKS” for the entire 2OT and it actually spread throughout the rest of the stadium at one point. Kid had it figured out. Have to get those intermission Zzzz’s in 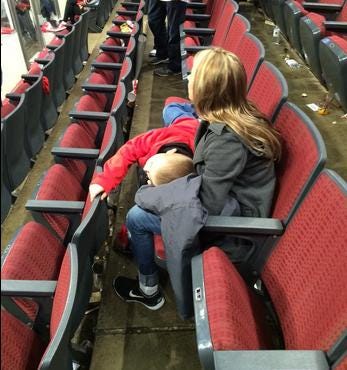 The games haven’t been easy, but they are essentially following the script. Split in Nashville, break the Preds’ will in Chicago, close them out in Game 5, pray for collateral damage and 7 games in the STL-Minny series. Bye Smashville. 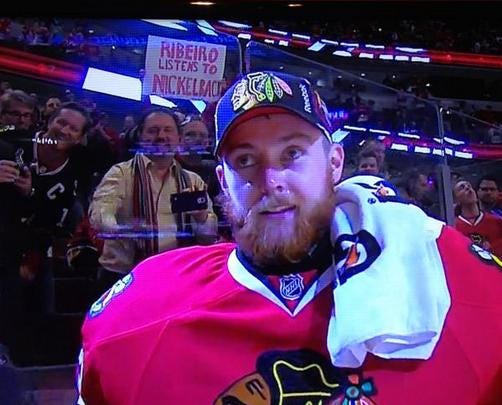