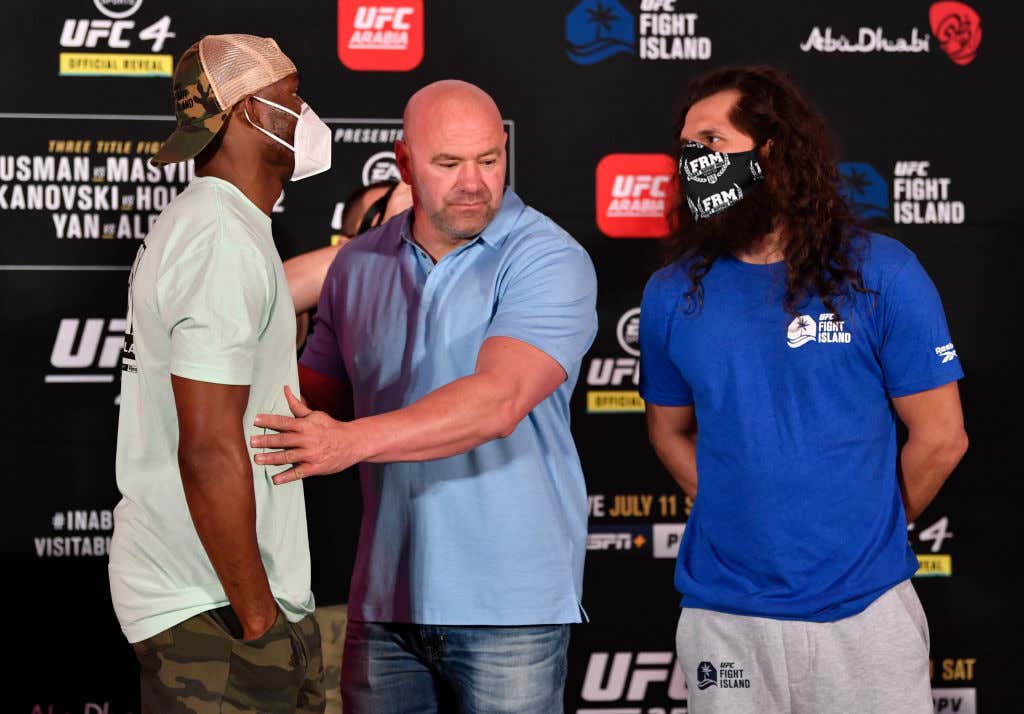 Many people are criticizing Dana White and the UFC for not having Fight Island on a beach. However, Mr. Cat and Mr. Commenter are NOT part of that group. That can't be stated enough. But to clear things up, the duo welcomed recurring guest Dana White back on the pod to discuss what will be a huge night on Fight Island tomorrow, featuring another recurring guest in Jorge Masvidal.

So, why is Fight Island not happening outdoors? Dana White explains...

Mr. Cat: Dana, you know that we would never criticize you, but some people might be saying that Fight Island isn't really living up to the hype of Fight Island because you're not actually fighting on a beach. What would you say to those people? Not us...

Dana White: Well, Fight Island, we're on an island. We're on Yas Island, Abu Dhabi. Never did I sat the fight was on the beach. Let me tell you what a shit show you're asking for t have a fight on a beach.

Mr. Cat: Yeah. What would happen, though? Because when I saw the video of the beach, my first thought was Hulk Hogan turning heel, Bash at the Beach. I was like, maybe this is what we're doing, that would be sick. My second was, how is this going to make sense? So do you think that the people who are saying this is bullshit, you're not fighting on a beach? What do we say to them?

Dana White: First of all, just the lighting ring. Just the lighting ring that would have to be set up for the thing to look remotely professional would bee impossible to do on the beach. Not to mention the fact that it's 118 degrees here with 100 percent humidity. So, you would drop dead walking to the octagon. And for the people who thought it was literally on a beach? You're a fucking idiot.

Mr. Commenter: Well, I think we both thought that it was going to be on a beach. We are fucking idiots. But for the lighting, you just have a bunch of torches and just fire everywhere, just like fire pits and shit. That's what I'm picturing, something like primal. Here's how you can win over some of those people, not us, again, who might be saying it's not really Fight Island. Just tell everybody that all the water around it, is shark-infested water. So if you just say, like, we're surrounded by shark-infested water immediately, that bumps it up a notch in the in the Fight Island rankings in my head.

Are Mr. Cat and Mr. Commenter now guilty for these accusations? Ehhhhh, I don't know, Jim. I think many people had the beach visualizations in their head when the idea of Fight Island first popped up. But Dana White does bring up solid points on how logistically tough it would have been to pull off. Regardless, tomorrow night is going to be an epic evening in the octagon. Our guy Robbie Fox will have every angled covered leading up to the fights, so stay tuned for that.