Arthur Ashe becomes the first black man to win a Wimbledon Singles Title. In the final, Ashe beats fellow American Jimmy Connors in four sets (6-1, 6-1, 5-7, 6-4). Connors was the reigning Wimbledon Champion and ranked number one before the match. It is the third and final career major championship for Arthur Ashe, who previously won the 1968 US Open and 1970 Australian Open.

Arthur Ashe was born on July 10, 1943, in Richmond, Virginia. Ashe learned to play tennis at a tennis camp set up by Robert Walter Johnson, who had been the tennis coach of Althea Gibson, who was the first black woman to win at Wimbledon in 1958. Unable to play in Richmond tournaments due to racial segregation, Ashe moved to St. Louis, this helped him win the National Junior Indoor championships and earn a scholarship to UCLA.

While at UCLA, Arthur Ashe was able to train with Pancho Gonzalez, a former top-ranked tennis player. He later joined the Army and became head of the tennis program at the U.S. Military Academy at West Point. While in college and the Army, Ashe was an active competitor on the amateur tennis circuit. He was the first black man on the Davis Cup and made the finals of the Australian Championships twice.

In 1968, Arthur Ashe became the first person to win the U.S. Amateur Championship and U.S. Open Championship in the same year, earning the number one ranking in the world along the way. It was the start of the open era, and he was the first champion at the U.S. Open. Wanting to maintain his amateur status, Ashe was unable to accept any prize money. Later he helped the United States win three straight Davis Cup titles in 1968, 1969, and 1970.

Arthur Ashe would win the 1970 Australian Open but struggled on the clay courts in France. He also had his struggles on the grass in London, as his appearance in the finals of the 1975 Wimbledon Tournament was his first chance to win at the All-England Lawn and Garden Club.

Jimmy Connors, who was born on September 2, 1952, in East St. Louis, Illinois. Connors was a natural, winning junior tournaments when he was 12. Turning professional in 1972, Connors quickly became one of the top players in the world in 1974, he won three of the four grand slam titles, missing the French Open to concentrate on Wimbledon. Connors repeated that strategy in 1975, after reaching the finals of the Australian Open.

On his way to the Wimbledon Championship, Jimmy Connors dominated as he did not lose a single set. Arthur Ashe meanwhile needed five sets to defeat Tony Roche of Australia in the semifinals. It was the first All-American final at Wimbledon since 1947. Arthur Ashe was the sixth-ranked player in the world, dominated the first two sets against Connors winning 6-1 in both sets. Connors rebounded to take the third set 7-5, but it was clearly Ashe’s Day as he won 6-4 in the fourth set to win the championship. 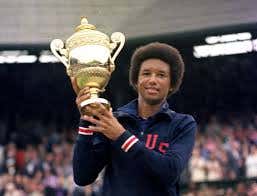 It would be the final major title of Arthur Ashe’s career as he began to have health issues. In 1979 while giving a tennis lesson, Ashe suffered a heart attack. He would undergo a series of surgeries over the next few years, one of these surgeries would result in him contracting AIDS from tainted blood. In his final days, Ashe worked hard to raise awareness of heart disease and HIV/AIDS. Arthur Ashe would succumb to AIDS in 1993 at the age of 49.