Alex Ochoa a highly touted prospect who was called up from AAA by the New York Mets two weeks earlier hits for the cycle. Ochoa goes 5-for-5 with a pair of doubles, driving in three runs with three RBI as the Mets outslug the Philadelphia Phillies 10-6 at Veterans Stadium. Alex Ochoa ended his rookie year with a .294 average but struggled in subsequent years as he never reached the expectations that were set for him.

Alex Ochoa was born on March 29, 1972, in Miami Lakes, Florida. Growing up in South Florida, Ochoa was chosen in the third round of the 1991 MLB Draft by the Baltimore Orioles. Over the next four years, Ochoa became one of the top ten prospects in baseball, as he was labeled a can’t miss player who had five tools. In 1995, Ochoa was traded to the New York Mets along with Damon Bufford in a trade deadline deal for Bobby Bonilla.

After the trade, Alex Ochoa made his debut with the Mets at the end of the season. The next spring, Alex Ochoa began the season in AAA at Norfolk. As the Mets struggled in the first half under manager Dallas Green, the fans clamored for Ochoa to be called up. That would not happen until June 22nd. The Mets prospect played well in his first week, hitting his first major league home run against the Philadelphia Phillies on July 1st.

Mark Clark made the start for the Mets, who entered the game with a record of 37-45, while Terry Mulholland made the start for Jim Fregosi and the Phillies who were 34-47 and looking to complete a three-game sweep of the series.  After a scoreless first inning, Alex Ochoa got a single in the second inning, as the Mets scored the first run of the game on an RBI single by Butch Husky sending home Jeff Kent. The Phillies answered right away as Jim Eisenreich scored on a triple by Pete Incaviglia. In the third inning, Todd Zeile gave the Phillies a 2-1 lead with a double that scored Ricky Otero. 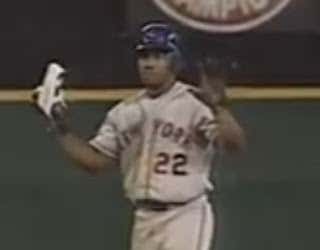 In the fourth inning, the Mets rallied to retake the lead with three runs. Alex Ochoa had the big hit with a triple that scored Todd Hundley who earlier tied the game with a double scoring Kent. Ochoa would score on a single by Rey Ordonez. After the Phillies scored in the fifth inning, the Mets extended the lead to 6-3 in the sixth. Alex Ochoa remaining perfect on the night had a leadoff double and scored ahead of Butch Husky’s two-run homer. The Phillies would rally to tie the game in the bottom of the sixth, as Gregg Jeffries singled with the bases loaded to chase Mark Clark. Todd Zeile followed with an RBI single off Paul Byrd.

In the eighth inning, Alex Ochoa completed the cycle with a home run off Ken Ryan. The Mets added a second run when Tim Bogar scored on a single by Lance Johnson. After Doug Henry shut down the Phillies in the eighth, the Mets added two more runs as Bernard Gilkey hit a home run and Ochoa added an RBI double, scoring Jeff Kent. With a 10-6 lead, Henry remained in the game and got the save as Benito Santiago made the final out with a grounder to third.

Alex Ochoa batted .296 with four home runs in 1996. His following season was a major disappointment as he hit .244 with just three home runs. Following the 1997 season, Ochoa was traded to the Minnesota Twins for Rich Becker. In the eight seasons, Ochoa would play for six teams before moving on to play in Japan. Alex Ochoa would have another cycle with the Hiroshima Carp, as is the only player to get a cycle in MLB and NPB.