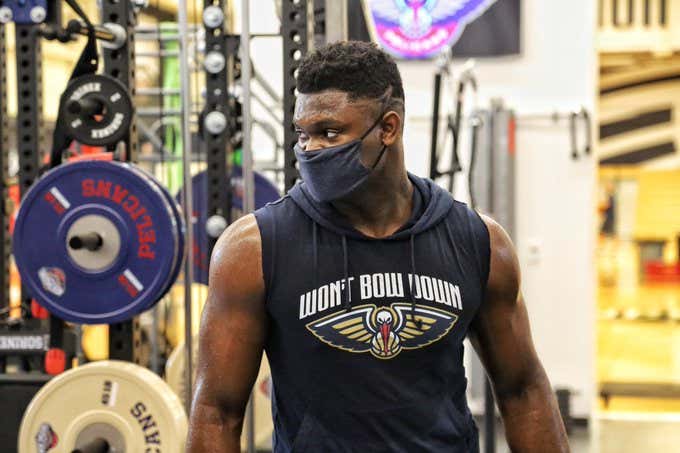 Uhhhhhh holy shit. Remember about a week ago when we had David Griffin talking about Zion looked great and then there was that "source" who said he was going to shock people? That was no bullshit. When this hiatus first started one of the biggest questions we all had was how were players going to look once things eventually came back. Who would stay in shape and who would be like the rest of us and just get fat as shit during quarantine. Then pictures started to leak out and more and more players are looking to be in the best shape of their lives. What's interesting is it's the people who many thought would go in the opposite direction. James Harden, Nikola Jokic, Marc Gasol, and now Zion all look great.

I'm fairly certain that I'm looking at a real life Bane. If you recall, Zion was already fairly unstoppable in his first 19 games when he wasn't in what I would call elite shape.

well now you combine an in shape Zion with the league's easiest schedule over the final 8 games and you have yourself a reason to be excited as a Pelicans fan. Or really anyone who wants to see Zion vs LeBron in the first round. Sorry Memphis. I think that would be a fun story, Ja Morant on the big stage sure is enticing, but most people will want to see an in shape Zion face LeBron. You have Ingram/Ball/Hart all going up against their old team. AD vs his old team that he quit on. Imagine the upset? That's a storyline that the people want. Those people are also the NBA. Who knows if the Pelicans can actually put together the stretch of play they need to get into that play in game, but that team had the old Zion. This one has a new version who for all we know will never get tired. He was playing under 30 minutes during the season and for the Pelicans to get to where they want to go, that's going to have to go way up in the postseason.

I'm just glad that whoever told us we were going to be shocked about Zion wasn't lying. This version is legit terrifying.