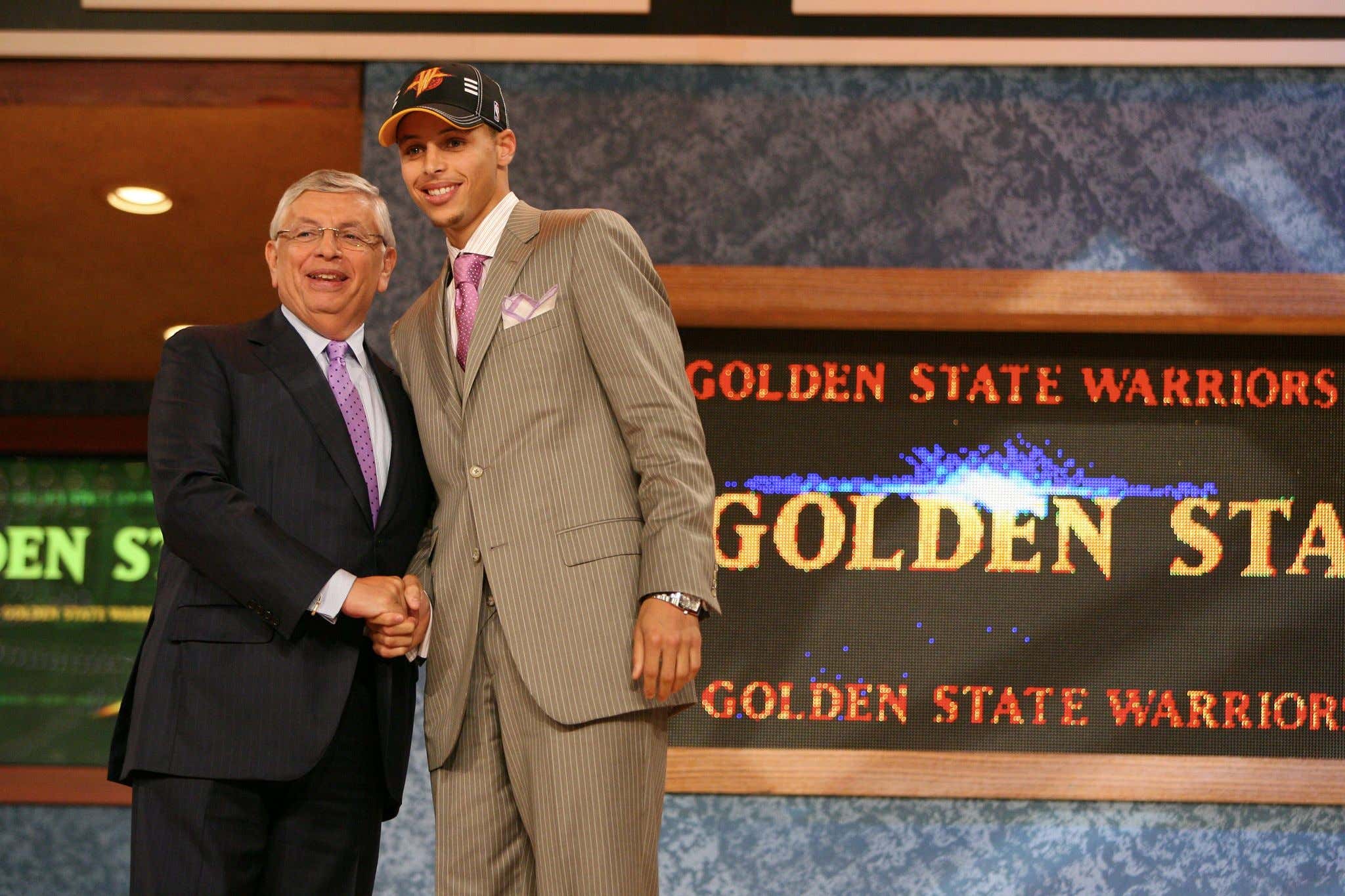 When you think of tortured NBA fanbases you might think of teams like the Knicks, Kings, Wizards, Suns etc but for my money it the leader in the clubhouse has to be Timberwolves fans. Some of my closest friends from college are from Minnesota and quite frankly I wouldn't wish their basketball fandom life on my worst enemy. As a franchise they've been around since 1989 and have a total of 9 playoff appearances. A total of 8 of those came to an end in the first round, and they have just one appearance in the last 16 years. They had to see their greatest player in franchise history leave and win a title somewhere else, and if that didn't cause them enough pain, what happened on this day 11 years ago sure did.

Oh no David Kahn, what did you do. Well we know what he did. He passed not once, but twice on the greatest shooter in the history of basketball. Not only that, but he did it with two guys who play the same position! You know what happened next

and the Warriors were never the same.

This obviously looks like a disaster in 2020, but you have to remember what life was like back in 2009. Ricky Rubio was one of the most hyped point guard prospects in years. He had been playing professionally for a few years and the hype surrounding Rubio made him out to be this generational talent. To me, that pick wasn't all that surprising. Jonny Flynn had a pretty dominant sophomore year at Syracuse averaging 17.4/6.7 on 46/31% shooting. He was on the All Big East team and won the Big East Tournament MVP. He was largely considered one of the most exciting players in college basketball at the time. He made one of the All Region teams during the 2009 March Madness. It's not like he was some sort of scrub, but going point guard/point guard with back to back picks in the top half of the lottery may seems confusing. Remember though, Rubio didn't come over until the 2011-12 season. They probably felt that they needed to take Rubio because he was the next big thing, but also needed a point guard who was still good that could step in and play right away.

Which brings me back to the suffering of Timberwolves fans. Jonny Flynn actually had a decent rookie year for MIN. He started 81 games and put up 13.5/2.4/4.4 in 28 minutes a night. But then the injuries started to hit and he was never the same. It was also clear the Kurt Rambis had no idea what he was doing. The Wolves won just 15 games in 2009 and 17 games in 2010. By the time Rubio came over Flynn was pretty much done and was traded in that 2011 season. When we got our first look at Rubio it was clear he was an incredible passer, but the man could not shoot to save his life. In his 6 seasons in MIN he had just one season in which he shot over 40% from the floor. Mind you while this was happening, Steph was doing shit like this

That stings. I really think that had Rubio gone to any other franchise his career goes differently. I'd say now when you look at what Rubio turned into, he falls into the "fine" category. Great passer, solid locker room guy, but very much not the savior his 2009 hype suggested. Sometimes franchises are just cursed and MIN definitely falls into that category.

I also think the same is true for Curry. Landing in GS was the best thing that ever happened to him. You could tell there was something there as soon as we saw him in summer league

Getting his start under Don Nelson and then having Mark Jackson has to be a point guard's dream. Their style of play fit Curry perfectly, and as soon as he got over his ankle issues and Steve Kerr took over, well you know what happened. If he ended up in MIN or even the Knicks who were picking after GS, do we see the same Curry we have today? I'm going to go ahead and say probably not. As someone who enjoys watching Curry play, I'm thankful he didn't end up in either of those dumpster fires.

So to any Timberwolves fans out there, I feel for you today. I don't know why you even clicked on this blog in the first place only to relive that pain if we're being honest but thank you for the pageview. I'd say the good news is things are looking up for the Wolves moving forward but I don't want to lie to you.

Look on the bright side though. At least you have KAT…….for now.