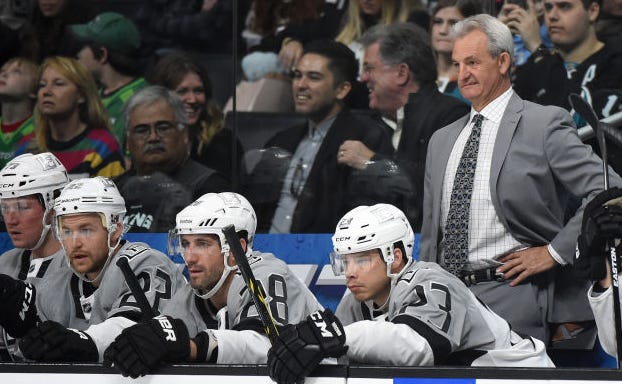 (Source)  Parity didn’t take down the Kings. Time finally caught up to them. The grind caught up to them.Seriously, 64 playoff games over the last three years in which L.A. won the Cup twice and lost in the conference finals — their seasons ending on June 11, June 8 and June 13, respectively.

And though the league has done everything within its power to promote parity, the cap acting as the elemental mechanism, the calendar eventually plays its part. The 1980-83 Islanders hoisted their four straight Cups between May 16 and May 24. The 1976-79 Canadiens captured their four straight between May 14 and May 25. The 1956-60 Canadiens were done between April 10 and April 20 in winning their five straight.

So fatigue was certainly one of the issues the Kings could not overcome in becoming the first defending Cup champion to fail to qualify for the playoffs since the 2006-07 Hurricanes. But there was a fatigue of a different kind at work as well in L.A., for the fact is the players had become tired of Coach Daryl Sutter.

Slap Shots has been told by two sources that the Kings locked the door to their locker room following a defeat on the road within the last two weeks so that Sutter could not get in and deliver what the players apparently expected to be another in a series of lectures/tirades.

As the tale was told, after Sutter finally tracked down an arena operative to unlock the door, he was greeted by three heavy waste receptacles lined up as barricade to what had become an empty room.

This is unbelievable and I mean that in the literal definition of the word, I simply can not believe that this happened to a professional sports team. I was already pumped that the Kings missed the playoffs, yes that’s partially because of fear, but to see their team basically implode is just the cherry on top. Has something like this ever happened before? The Kings are basically a Teenage girl that locked herself in her room while her mom yelled “Open this door!” outside. I can’t imagine the level of dysfunction it takes to get to this point. Just so sick of the nagging and bitching that you barricade the locker room to spare yourself yet another verbal lashing. Like when your girlfriend or wife gets on your case and you say fuck it, I’m going to the bar. Kings basically went to the bar for the last month of the season.

Little upset I won’t get to eat any In and Out this year.