Let's take a trip back to 2016. It was the first year that one of the BKN picks was going to be in the high lottery. There were rumors swirling that the Celts were going to trade that pick for an established player. I mean we heard everything from Nerlens Noel and Robert Covington (lolllllllll)

and of course Jimmy Butler

before ultimately not making a trade (shocking!) and selecting an offensively raw but super athletic Jaylen Brown out of Cal. You might also remember this was when Wyc got booed at the Celts draft party while announcing the pick

people were outraged they either didn't trade the pick for Jimmy Butler or they were outraged the Celts didn't take Kris Dunn or Buddy Hield. Let's revisit that chart by ESPN again shall we? 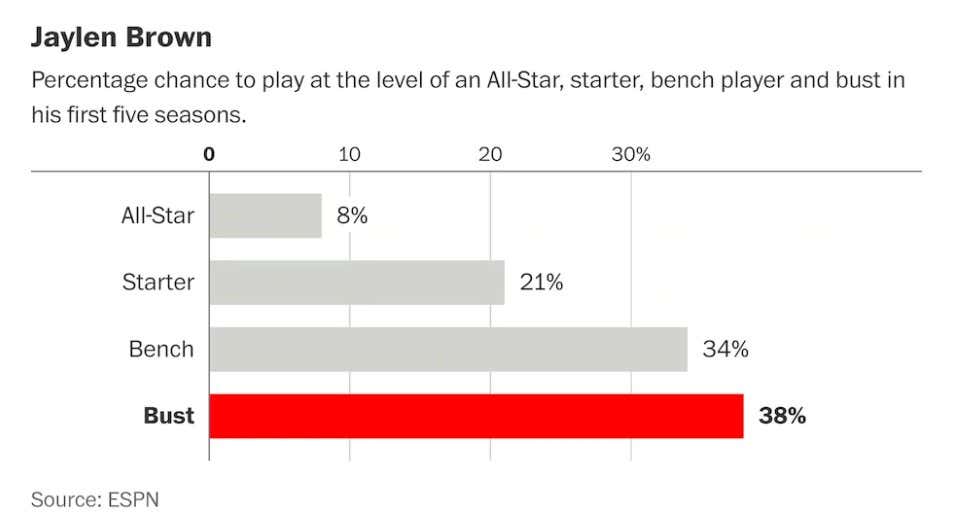 #ESPNLIES amirite? We can now look back at this chart and laugh. It took just 1 season before Jaylen became a starting SG in the NBA. While he did not get selected to the All Star game this season, his 20.4/6.4/2.2/1.1 on 49/38% shooting with 2.1 3PM is about as close to All Star caliber as you can get. A reminder, this is his 4th season. I think he has a little bit better of a chance than 8% to make it next season. I remember the biggest knock with Jaylen was the idea that his shot would struggle, but what's interesting is in 78 appearances during his rookie season he shot 45/34%. Not bad!

Stuff like this just goes to show that when it comes to the draft and projections, nobody knows a goddamn thing. Not even the "experts" at ESPN. When you say there's a 72% chance that Jaylen is going to be a bench player or a bust and he turns into one of the best young players in the entire NBA, that's rough. Good job nerds! I mean it's hard to end up being more wrong than that chart.

I was curious what my initial reaction was when I blogged this pick in real time and I was happy to see DevNest hadn't deleted it. This was my on the spot initial reaction as soon as we heard Jaylen's name

We finally have an answer. Jaylen Brown it is. I wrote the other day there really is no way to know which one of these 3-6 guys is going to pan out, and Brown very well could. On the surface his lack of shooting scares me, but it’s too early to tell in the process if he even stays with the team. The hope is that Jimmy Butler wasn’t lying, and he eventually turns into that type of player. Physically he’s what you want, and at least we don’t have to worry about a logjam at guard. I know, I know, he can’t shoot, and that’s what the Celtics need. It’s confusing, but sometimes you take the risk and hope it develops.

Yeah, I was hoping for a trade, and while it can still happen, this pick tells me maybe shooting is coming by way of established NBA talent.

Oh… and I totally scooped Woj on this #sources

Looking back, it feels like Jimmy Butler was right. Jaylen pretty much turned into the two way monster wing the Celts hoped he would. At the time I was certain they were going to make some sort of blockbuster trade because in 2016 I still believed in the idea behind "Trader Danny". Remember we had just seen him make like 4 trades the season prior. This was a time when Ainge pulled the trigger like no other. That shooting I was talking about them adding became Al Horford/Gerald Green later that summer so I was onto something there.

This is why, when in doubt trust Danny Ainge. He's not perfect, and I know people like to say he can't draft, but this is a prime example of why I will blindly follow that man. He saw something in Jaylen that nobody else really did, especially armchair GMs. He was taking Jaylen based on what he could turn into rather than what he showed at the time in 2016. I can say comfortably there is not a player I would rather have that was taken after Jaylen in that 2016 draft. Not Buddy Hield, not Jamal Murray, not Caris LeVert etc. Sure some guys might be better shooters, but when you talk about all around players who show up on both ends, Jaylen was a home run pick and then some.