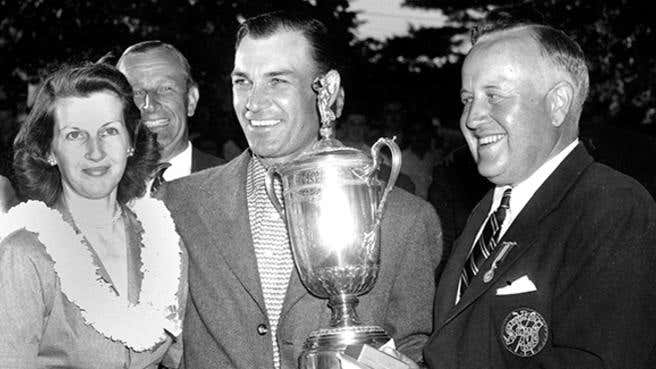 In what will become called the “Miracle at Merion,” Ben Hogan wins an 18-hole playoff over Lloyd Mangrum and George Fazio. Hogan had won the 1948 U.S. Open but suffered a near-fatal accident on February 2, 1949. Doctors thought Ben Hogan would never walk again, let alone play golf after the accident. Ben Hogan would go on to win the PGA Player of the Year award in 1950.

Ben Hogan was born on August 13, 1912, deep in the heart of Stephenville, Texas. Turning professional right at high school, Hogan was hardly an overnight sensation as he struggled through his first decade and lived in poverty while working as a club pro in Texas. In 1940, Ben Hogan finally tasted victory and soon became addicted to winning, as he won three straight tournaments the first of his career. Over the next three years, Ben Hogan, who lived with his wife’s family, became the PGA’s top money winner in 1940, 1941, and 1942 before serving in the U.S. Army Air Forces during World War II.

After returning from the service, Ben Hogan picked up where he left off, and was the PGA’s leading money winner again in 1946, winning the PGA Championship for his first major title. In 1948, Ben Hogan had his best season to date, winning his first career U.S. Open title, and winning the PGA Championship for the second time as he was the tour’s leading money winner for the fifth time. Hogan was off to a great start in 1949, winning the Bing Crosby Pro-Am and the Long Beach Open in January.

Returning home from the Phoenix Open, Ben Hogan crashed into a Greyhound Bus on a foggy morning on February 2, 1949. Initial reports stated that Hogan was killed in the crash, but he survived suffering several serious injuries. Included in the injuries as a double fracture of his pelvis, a broken collar bone, a broken ankle, and broken ribs. Hogan later suffered near-fatal blood clots as he spent two months in the hospital.

Ben Hogan missed the 1949 season recovering from the accident. After returning in January of 1950, most doubted he could return to the championship level. He would have a strong showing at the Masters, finishing fourth, giving hope that he could again become one of the top golfers in the world.

The 1950 U.S. Open was held at the Merion Golf Club in suburban Philadelphia. Ben Hogan made his first U.S. Open appearance on the same course in 1934. Lee Mackey ruled the course in the first round, shooting a six-under-par 64, holding a three-shot lead over Al Brosch. Hogan, meanwhile, was at +2, shooting a 72. The 64 was an 18-hole record at the U.S. Open.

Lee Mackey, who was the Cinderella story on Thursday, turned into a pumpkin on Friday, with an 11 over, 81. It was a rough day for most on the course, as Dutch Harrison, who shot a 67, was the only golfer under par after 36 holes. Ben Hogan had a satisfying 69 and was one over for the tournament heading into the weekend.

On moving day, it was Lloyd Mangrum moving to the top of the leaderboard with a 69. Mangrum was one over for the tournament, with a one-stroke lead over Dutch Harrison and a two-stroke lead over Ben Hogan, Carry Middelcoff, and Johnny Palmer.

In what be one of the ugliest final rounds in the history of golf, the course was merciless and unforgiving as birdies were rare. Mangrum had six bogies on his first seven holes to drop to +6. All other contenders were doing just as poorly as Ben Hogan at +4 was suddenly in the lead at the turn. George Fazio had the top round, shooting a par-70, as his +7 became the clubhouse lead. Hogan, with a bogey on the 17th hole, also found himself at +7, while Lloyd Mangrum settled down from his ugly start and also finished at seven-over par (287).

Ben Hogan would win both the Masters and U.S. Open in 1951. In 1953, he would become the first golfer to take three modern majors by winning the Masters, US Open, and the British Open. It was the only time in his career that Hogan competed in The Open Championship. Overall, Ben Hogan won nine major titles in his career only Jack Nicklaus (18), Tiger Woods (15), and Walter Hagen (11) have won more.