I don't need to be reminded that when lives are being lost, businesses people worked their whole lives for are being looted and private property is being destroyed, graffiti on a public works project is way down at the bottom of the priority list right now. I realize that. And furthermore, I know that the graffiti is a show of anger and protest and not something that a lot of thought goes into. I get that too.

All I'm asking is that before you take the top off your can of spray paint, educate yourself to make sure the memorial you're vandalizing doesn't represent the very thing you're protesting on behalf of. Check to see if the monument you're defacing symbolizes the very best your city has had to offer in its history. Literal freedom fighters who risked, and in great numbers sacrificed, their lives to fight oppression. Such as this memorial, to the Massachusetts 54th Regiment. Here is the other side of it: 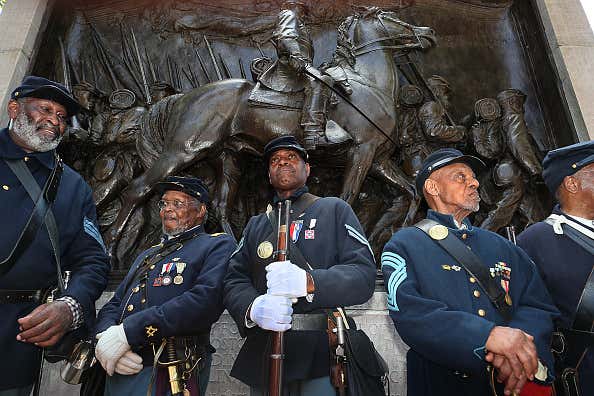 And a description of the regiment from the History Channel:

Early in February 1863, the abolitionist Governor John A. Andrew of Massachusetts issued the Civil War’s first call for black soldiers. Massachusetts did not have many African American residents, but by the time 54th Infantry regiment headed off to training camp two weeks later more than 1,000 men had volunteered. Many came from other states, such as New York, Indiana and Ohio; some even came from Canada. One-quarter of the volunteers came from slave states and the Caribbean. Fathers and sons (some as young as 16) enlisted together. The most famous enlistees were Charles and Lewis Douglass, two sons of the abolitionist Frederick Douglass. ...

At nine o’clock on the morning on May 28, 1863, the 54th’s 1,007 black soldiers and 37 white officers gathered in the Boston Common and prepared to head to the battlefields of the South. They did so in spite of an announcement by the Confederate Congress that every captured black soldier would be sold into slavery and every white officer in command of black troops would be executed. Cheering well-wishers, including the anti-slavery advocates William Lloyd Garrison, Wendell Phillips and Frederick Douglass, lined Boston’s streets.

“I know not,” Governor Andrew said at the close of the parade, “where in all human history to any given thousand men in arms there has been committed a work at once so proud, so precious, so full of hope and glory as the work committed to you.”

After the 54th charged a heavily fortified Fort Wagner, which guarded the Port of Charleston:

Two hundred and eighty one of the 600 charging soldiers were killed, wounded or captured. [Colonel Robert Gould] Shaw himself was shot in the chest on his way over the wall and died instantly.

To show their contempt for the soldiers of the 54th, the Confederates dumped all of their bodies in a single unmarked trench and cabled Union leaders that “we have buried [Shaw] with his ns.” The Southerners expected that this would be such an insult that white officers would no longer be willing to fight with black troops. In fact, the opposite was true: Shaw’s parents replied that there could be “no holier place” to be buried than “surrounded by…brave and devoted soldiers.”

If demonstrators want to tear down statues of Confederate generals, more power to them. I wouldn't want the bronze face of a guy who sent troops into battle to keep my ancestors in chains staring me from the top of a concrete pillar every day of my life either. But the Massachusetts 54th Regiment Memorial is the exact polar opposite of that. By any objective standard, these were the ultimate good guys, fighting for a righteous cause. And so badass and fought with such valor, they were like a real life version of the protagonists in a Tarantino film. Part Inglorious Basterds, part Django. But it was Edward Zwick who made a film adaptation of their story. And "Glory" is one of the great American history movies ever made.

Another thing I realize is how stupid it sounds for me to tell a collection of demonstrators that if they're going to deface monuments to deface them responsibly. But when they go after a memorial like this, it's something much worse. It's desecration. It's dishonoring the memory of honorable men who gave their all to fight the same fight that is still raging 160 years later. It's as offensive as if someone spray painted the Iwo Jima statue at Arlington or the 9/11 Memorial. And only hurts the cause you're protesting for. Peaceful protest is a sacred right, and it should be exercised as such. Damaging a monument to men who ran into bullets, bayonets and cannon fire to secure those rights for millions is not the way. Let's all be better.