All along I've been saying I cant speak on a lot of these issues with any sort of confidence or authority, because I dont have any experience. But something I do have experience with, and something I can speak on, is social media. And today is one of the biggest social media movements of all time - #BlackoutTuesday.

Some of the original ideas behind #BlackoutTuesday were fantastic. TheShowMustBePaused, which Pat explained in his blog: 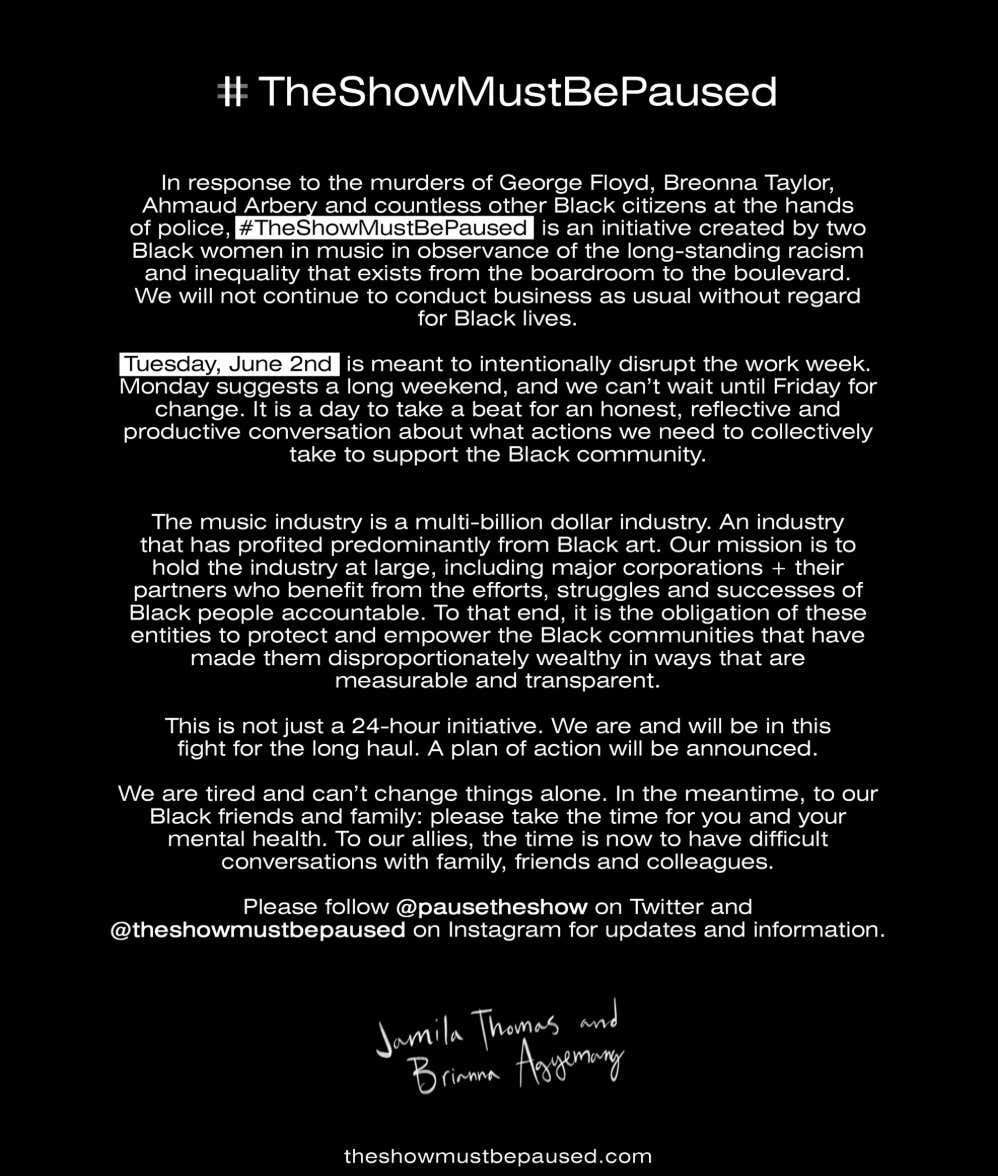 Then there was the #AmplifyMelanatedVoices and #MuteTheWhiteNoise. It was basically telling all the white people to be quiet for a day with the usual IG nonsense, and give the floor to black people, who the algorithm often wont promote, to speak their minds. Which is probably the best way to help right now, like a lot of us have been saying. Just shut up and listen. This, too, is a good idea. No doubt some white people from the All Lives Matter camp are going to be mad with that hashtag and complain about reverse racism or some bullshit, but fuck them.

But what ended up happening was a lot more complicated than that. A bazillion black boxes posted to instagram as a show of solidarity. Which, I fully recognize is important. The message of unity and togetherness and identifying everyone in your digital life who is down for the same cause. I understand it can be powerful imagery to see an app that is usually nothing but fat asses, puppy dogs, and gourmet food has transformed into an endless string of black boxes. It will definitely give some people pause, and make them realize the scale and scope of this, and maybe will help them realize the importance of all of this. And thats a good thing. So I'm not saying the Blackout idea is all bad.

But what I am saying is that it also wasnt very well thought out. I think there are some detrimental unintended consequences that may hurt more than the black boxes help. First and foremost the majority of people began posting with the hashtag #BlackLivesMatter, which is often used to find important information, charities, and stories, etc. Its used to inform and organize and now when you search that hashtag its just an abyss of black. Now, to be fair, I think that this message is now sufficiently out there and most people are aware to use that hashtag and rather use #blackouttuesday, so for the next 12 hours maybe it wont be as bad. But the movement stumbled out of the gates hard with being an actual detriment to the cause.

1) Its seemingly encouraging people to not post anything else. The original idea was to continue to post about the movement against racism as well as the black box to show solidarity. And I think the black boxes simply took over. The thing that has been the most enlightening and educating to me has been the terrifying, harrowing, unbelievable, eye opening footage from the front lines. Seeing asshole rioters run over cops with cars. Seeing asshole cops run over protesters with cars. Seeing cops escalate peaceful protests into full scale riots. Seeing local businesses who lost everything from looters. Seeing some of those same local business owners say they'll be fine and that black lives matter more than their storefront. Seeing a 23 yr old kid pouring his heart out asking to be friends with police and being arrested for no reason. Seeing two dudes standing quietly in the street who get lit up by rubber bullets. The list goes on and on. All those videos are what have furthered the discussion, exposed the horrible injustices on both sides, and taught people some harsh realities that they never knew about in their privileged lives. Its images like that which might change some minds. So people actually know whats going on outside their bubble.You know what is very much inside their bubble? Instagram likes and clout.

Which brings me to #2

2) I think a lot of people are doing this for the 'gram. Not because they're exploitive racist assholes using a racial movement for their own gain. Nothing that nefarious. And not because you're not allowed to offer up a nice gesture in hard times. It feels a lot like saying "Thoughts and Prayers" after a tragedy. In very difficult times, you're at a loss for words, so you offer up a generic sign of compassion. Thats nice, and appreciated on some level. But then the people who are really about that cause are like "Fuck your thoughts and prayers, that doesnt change anything." The boxes are thoughts and prayers. On the surface a nice idea, but if we're being blunt and harsh about it, thats something you say (or in this case post) to make yourself feel better. Maybe a little less guilty and feel like you're a part of the solution. Its checking a box because its easy and, according to some people in the public, its been deemed effective. And thats not to say you have to be standing on the front lines losing an eyeball getting hit with a tear gas canister (another powerful image you will now not see today) but also dont act like its that effective either to post a black box. You're posting for yourself, and for those who already agree with you. But not a single motherfucker out there who's against progress is thinking "Wow. This is powerful. Maybe we should listen to these people."

Now, the real reality is that probably nothing will change their minds, but I do know that I saw a lot of people yesterday who thought it was absolutely impossible that Gee Jordan was arrested for no reason at all. They all said "Use logic. Theres more to this story. They wouldnt arrest him like that for no reason." And then when they were showed the proof there was no more to the story, and that he was arrested and charged for nothing, I KNOW deep down somewhere they wont admit, they went "Holy shit they really did just arrest him for no reason." And thats not going to end racism but its an inkling of hope resulting from seeing some fucked up imagery and finding out this really IS how it goes for some people in america. Scrolling past a thousand black boxes - or even worse just not even opening one of the biggest platforms for viral video consumption - just eliminates any chance of those moments for change. You now who probably loved this today? Crooked cops and shitty people rioting who basically get a 24 vacation from the endless barrage of video evidence of them backing up every single stereotype about them. If IG was shut down or if people were banned from posting their videos, Instagram users would be up in arms, right? Well in this case, they just effectively did it for them. Just stopped IG posts for the day.

I dont want to sound overly harsh, even though I just did. I understand social media is different for people without a platform, like this girl:

Thats obviously a positive message. And I'm not here to argue with anybody who feels like progress is the answer. This dumb instagram thing has people on the same side of the fight arguing with each other, and thats idiotic.

SO. How about we do this - post the black box in solidarity. Identify your allies and what not. Feel the support of unity and being together in this. And then continue posting the imagery that makes a difference. If you ask me, the agreed upon image for Blackout Tuesday should have been a picture of George Floyd. People are already starting to forget about him as the argument has shifted to cops vs protesters. Dont lose sight of why this is happening - and for the people who are, why not all post a picture of him? And if you wanna get real real about it, it should be a picture of him being murdered. THAT would be powerful. THAT would make people turn their heads. Maybe make people reconsider their thoughts. Like when people say you should show the names and faces of kids killed in school shootings so that it SETS IN HOW FUCKED UP THIS IS. Show George Floyd getting asphyxiated. But people aint ready for that. People arent down to post a graphic image like that so that would never work. IG would probably flip out with all that on their platform. Everybody getting strikes or shadowbanned or whatever. That would make some noise. But thats not as nice and not as easy as a black box.

Very long story short - stop fucking with the algorithm hashtags. Dont stop posting things that actually inspire discussion and change. Dont stop shocking some people with the unfortunate truths about both extreme ends of this tragedy. And take a minute to repost the people who we should all be listening to and focusing on - black people who live this nightmare. Who cant just turn it off for a day and feel accomplished. Who deserve to get WAY MORE than just one goddam day where their voice is heard. Post that black box every single day for a year straight - but also dont stop with the pictures and videos that inspiring way more than a social media gimmick does.