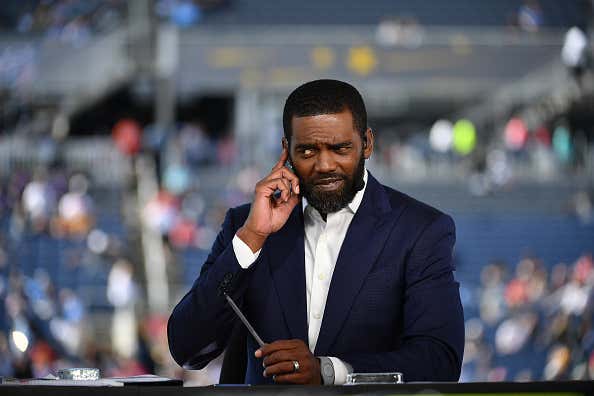 One of the hardest things for a person of my intellect and wisdom to do is accept a great idea when it is not his or her own. That takes more than intelligence; it takes emotional intelligence. The ability to be open-minded enough to consider the opinions of others, even if they are not at your sholarly level. As the plaque that President Reagan kept on the Resolute Desk in the Oval Office put it, “There is no limit to what a man can do or where he can go if he does not mind who gets the credit.”

And so it is that I give the credit to Frank Schwab of Yahoo Sports for solving one of the most vexing problems in the country (pre-2020). And that is what it will take to fix one of our most important institutions, "Monday Night Football," which is a shadow of itself.

One ESPN employee checks all the right boxes: Randy Moss. ...

Early in his career, he was the “I play when I want to play” guy, the player everyone got way too angry about (thank goodness social media wasn’t a big thing then). Then somewhere along the line, “Straight cash, homey” became a funny line rather than a reason to freak out.

By now, Moss is as loved as any former athlete. Tales of his greatness have reached legendary status. His personality is infectious. Seriously, find someone who doesn’t like Moss. You’ll find some. Not many. ...

Like [Tony] Romo, Moss has charisma you can feel through the television. We know that from his work on ESPN’s Monday night pregame show and some of his NFL Films mic’d up clips. He also knows the game as well as anyone.

“One of the smartest players I’ve ever coached. Certainly the smartest receiver,” Bill Belichick said of Moss on NFL Network last year, via Patriots Wire. “He taught me more about receiving and the passing game than by far anybody else.”

This is one of those moments where a man of humility should be honest enough to say "I wish I'd thought of this." Like a comic hearing another comic's great bit, all you can do is give credit where it's due and promise yourself you'll do better in the future. Of course, Randy Moss! It's so obvious. I know ESPN tried to roll dump trucks filled with money down Peyton Manning's driveway because he's got all the name recognition in the world. But ultimately we all know we would've gotten get carefully scripted, image-conscious, Professional Pitchman Manning. He would never have said anything more critical than, "He's a tremendous player" and "You have to admire the job he's doing coaching this football team. Manning would've practically been singing the Nationwide theme in the booth.

But what's so great about Moss is that he has no such filter. And not only is that rare on TV, it is the best quality any analyst can possess. He is the very definition of a guy who's crazy in a good way. But also, like Belichick said and Brady confirmed on many occasions, one of the brightest football minds they've ever encountered. I honestly don't ask much of these guys other than to tell us things we don't already know. We don't need someone who can describe a replay of a ball coming out of a guy's hands in a pile. The PA guy at your high school games could do that. But someone who'll explain routes and defenses and significant things on the back ends of plays we never got to see would be a godsend. Beyond that, all you can reasonably expect is that the guy be somewhat colorful, interesting and kind of relatable. Boston fans will know what I'm talking about when I use Dennis Eckersley as a prime example of all those things. And no one fits that description like Moss does.

I mean, how could not want to hear this guy every week?

The man got fined for not answering questions, so he asked an answered his own questions, like Gollum and Smeagol. And then went completely off the rails, talking about his old team lovingly, while drawing a paycheck from his new team. It was brilliant. Compelling. Heartfelt. Hilarious. But also 100% genuine. He's one of the most interesting football players of the last 50 years and he's way, way under-utilized at the World Wide Leader.

Make this happen, ESPN. It's the obvious move that will restore MNF to its former glory. And I hope that if it happens I will mistakenly get the credit somehow.