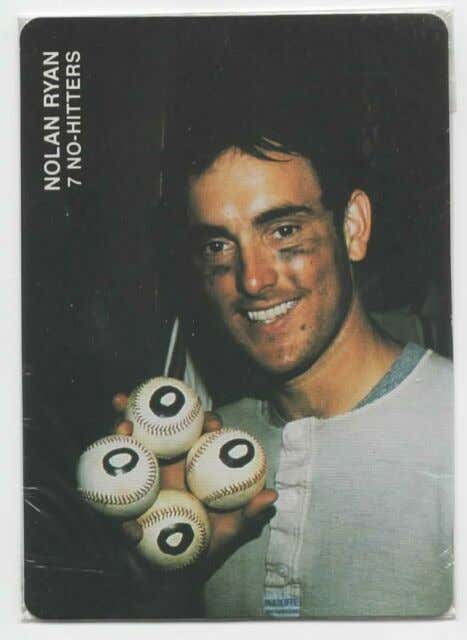 Nolan Ryan of the California Angels tosses his fourth No-Hitter in three seasons. The four no-hitters equal the career record held by Sandy Koufax of the Los Angeles Dodgers, who had four no-hitters from 1962-1965. Ryan allows four walks with nine strikeouts as the Angels beat the Baltimore Orioles 1-0 at Anaheim Stadium.  Nolan Ryan would go on to throw an additional three no-hitters, finishing his career with seven no-hitters.

Lynn Nolan Ryan was born on January 31, 1947, in Refugio, Texas. Growing up in a small town in Texas, Ryan was selected by the New York Mets in the 12th round of the 1965 MLB Draft. One year later, he made his debut in New York. Through the early part of his career, Nolan Ryan was plagued by wildness and blisters. He would make a significant contribution to the Miracle Mets, winning the clinching game in the NLCS and earning a save in the 1969 World Series.

Following the 1971 season, Nolan Ryan was traded to the California Angels with three minor leaguers for Jim Fregosi. Fregosi would not complete two seasons for the Mets, while Nolan Ryan met Angels pitching coach Jimmy Reese who would turn his career around. In 1973, Ryan tossed a pair of no-hitters against the Kansas City Royals and Detroit Tigers. That same year he set a record with 383 strikeouts. In 1974, Nolan Ryan tossed his third no-hitter against the Minnesota Twins. He was just the with a pitcher with three career no-hitters, joining Larry Corcoran, Cy Young, Bob Feller, and Sandy Koufax.

It was a Sunday Afternoon in Anaheim when Nolan Ryan off to an 8-3 start for the Dick Williams led Angels made the start against the Baltimore Orioles. Earl Weaver’s Orioles were struggling in the early going of the 1975 season, sitting at 18-26 as May came to an end. Ross Grimsley, who was sitting at 1-6, made the start opposite Nolan Ryan.

Nolan Ryan started strong, with two strikeouts in the first inning. Ryan would have five strikeouts with three walks in the first three innings. In the bottom of the third inning, Mickey Rivers started a two-out rally with a single. Tommy Harper and Dave Chalk followed with singles, allowing Rivers to score the game’s only run. Ryan would retire the next ten batters after grabbing the lead. In the seventh inning, the Orioles had their chance to get to Nolan Ryan as Bobby Grich walked, and Lee May reached base on an error by Billy Smith at short.  Ryan retired the next two batters to keep the No-Hitter intact. No other Orioles would reach base, as Bobby Grich ended the game with a strikeout.

Nolan Ryan would become the first pitcher to get five No-Hitters with the Houston Astros in 1981. Nine years later, at the age of 43, Nolan Ryan had sixth No-Hitter with the Texas Rangers in 1990. He tossed a seventh No-Hitter a year later. In the years since Nolan Ryan, Justin Verlander became the sixth member of the three No-Hitter club.