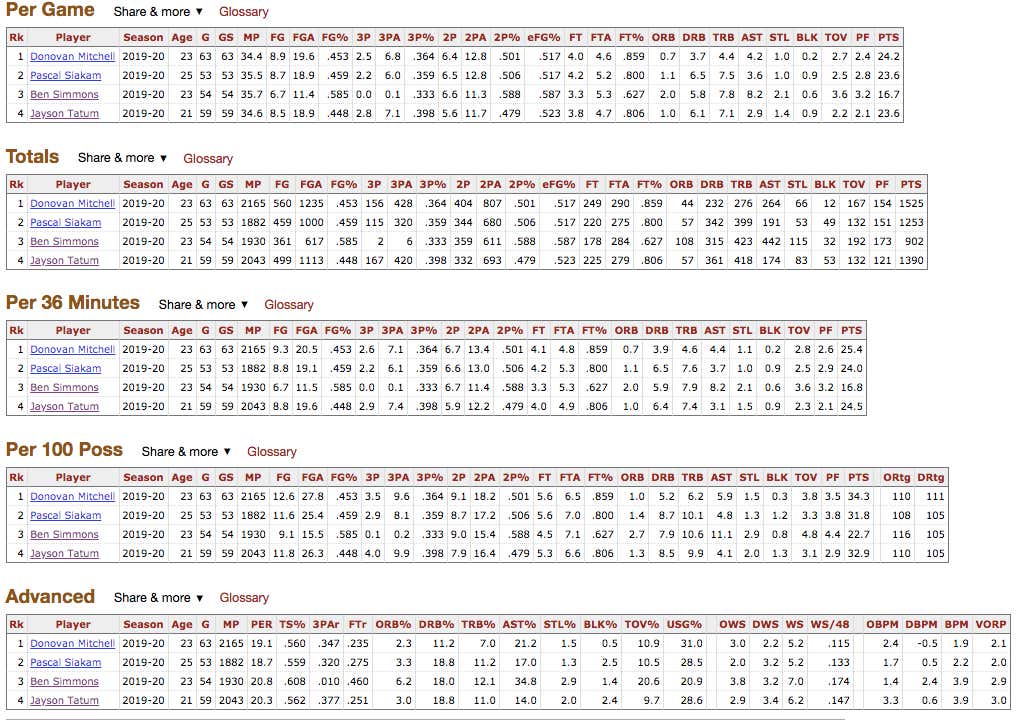 Around these parts we all have our roles. You want something tiered? Coley is your guy. Nobody can dream of being able to tier like that man can tier. You want a pick em where you have to build a roster with a given salary cap? Tyler is the best in the business and rumor has it is in negotiations to finally turn around the Pistons. Lord knows they need the help. And when you want some players ranked, I feel like I've proven during quarantine I'm willing to put my bias aside and have been pretty spot on with essentially every ranking blog I've done. Look it up.

Which brings us to today's topic. Ranking the four franchise players of some extremely sensitive fanbases. I can say that because I am a member of one of them. There is no doubt that those that are loyal to the Raptors, Celtics, Sixers, and Jazz will be upset that you didn't rank their favorite player higher. These are four of the most insufferable Twitter fanbases we have, the only thing missing are some Lakers bros. In fact I might be the most qualified person on the internet to come up with these rankings given I see three of them play a whole lot since they are all in the same division.

So here are my rankings. I fully expect some crying from those who feel I boned their favorite team, because that's what happens when you put these four fanbases together. Let's dive in.

Is this a homer pick? Not really. Maybe like 5.7% homerism is at play right now. Let me ask you this, of these four players, how many are going to make an All NBA team this season? The answer is Jayson Tatum and that's about it. Unless you think Siakam is gonna slide by Jimmy Butler on the 3rd team, but I do not. That would make him the only one of the four to snag both an All Star and All NBA selection while also being the youngest player. Tatum is for sure the best offensive talent of the bunch, notice I didn't say most efficient, but instead the best all around scorer. His bag is much deeper than anyone else listed.

On the defensive end he's about as legit a two way prospect as you could want. He defends multiple positions at a high level. He might not be at the level of Simmons defensively, but he has a higher Defensive Win Share, STL% and BPM as Siakam while tying him in BLK% and Drtg. At the very least it's a wash and Tatum is the more well rounded offensive player so he gets the nod.

Listen I may hate the Sixers and think they are giant frauds, but I also have eyes. While it's true that those eyes tell me that Ben Simmons is the most limited offensively of the four, the way he defends, rebounds, and facilitates makes him an easy choice for the second spot. You think of all the ways he can impact a game all with the inability to shoot, that's pretty unique. He's by far the best defender of the bunch, will probably get some DPOY votes, and what he does at his size isn't exactly normal.

There's a reason he has the highest Win Share of everyone listed. Hate him or not this man impacts winning (minus in the playoffs but shhhhh stay on topic please). I think part of his liabilities are mental, but also because he has a bozo for a head coach who has no idea how to utilize him. Would you just put him in the dunker spot Brett Brown you fucking moron.

This feels like the right spot for Siakam. We know he can thrive on the biggest stage, he's a legit defender and has really developed his offensive game over the last few years. The Spicy P spin move is fairly unstoppable. It's sort of unfair to group him with all these young guys since he's 25, and I know Raptors fans will think this is the latest instance of nobody giving them their respect, but these are just the facts. I can't put him above Tatum given what we already talked about, and I do not think he impacts games in more areas than Simmons in terms of being an all around player. Miles ahead offensively sure, but that's about it.

Which brings us to the final spot, occupied by Donovan Mitchell. Maybe you think he deserves to be higher, but I ask you, who are you bumping? He's the worst defender of the bunch, the worst rebounder, and is mostly a high volume scorer than anything else. Doesn't mean he sucks, he most certainly does not, but compared to these other three I don't see here else he could possibly live.

Now if the question was how would you rank these four in terms of wanting them in a playoff series, maybe the order changes. But if you're being asked to just rank the four of them as all around players,

Now, go ahead and yell at me because I snubbed your favorite team. Call me all the names you want, but deep down you know my list is correct whether you want to admit it to yourself or not.