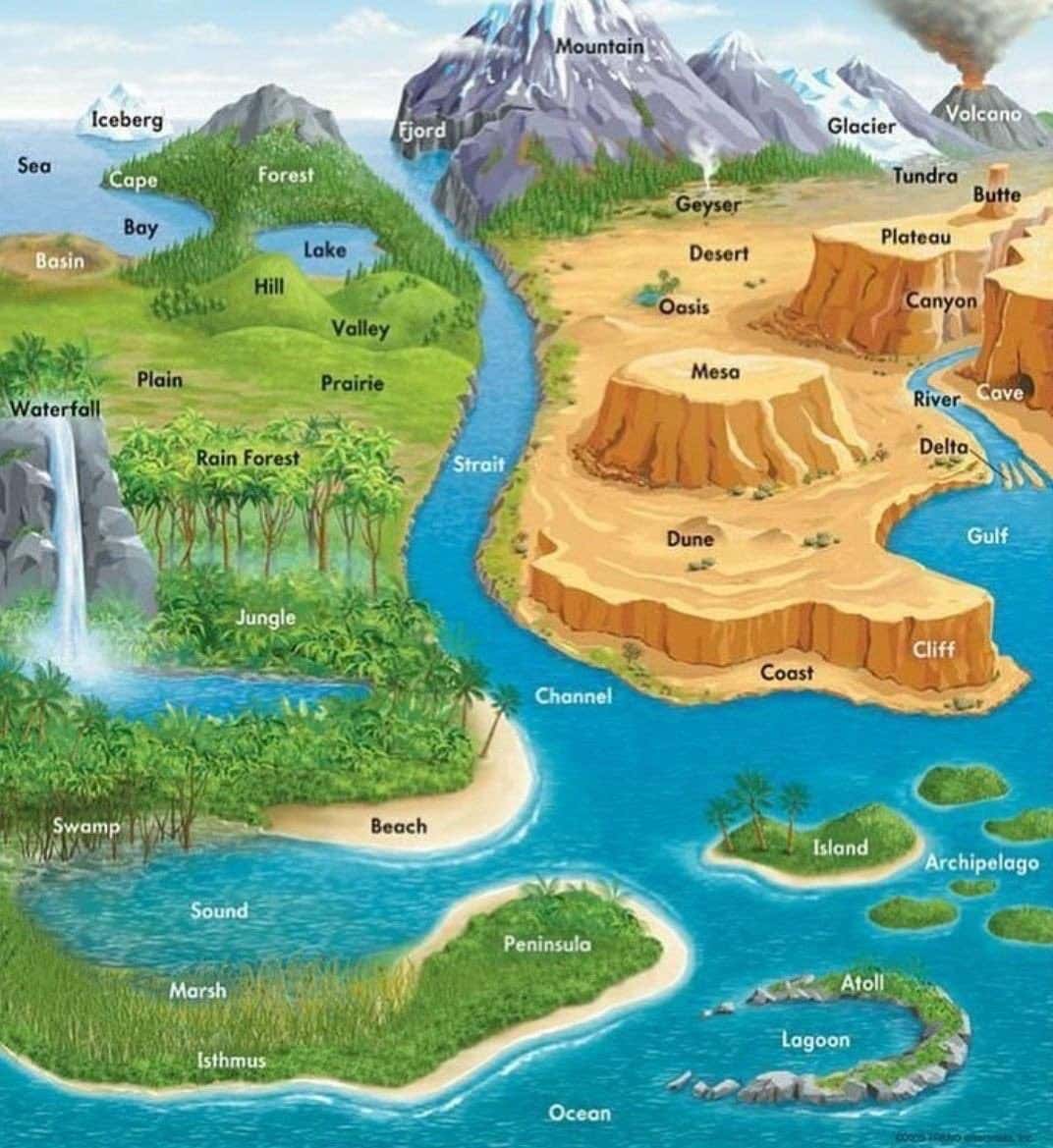 In all my years of tiering I never thought I'd see something so beautiful, so glorious, so perfect. There's never been anything more in need of tiering than the entire world's features. The peaks, the valleys, the wet, the dry, anything and everything you can think of, tiered once and for all. This wasn't easy, but anything easy isn't worth doing. When I accepted my place in the tier world I knew there would be days like this, and what better day than Memorial Day to put Waterfalls and Buttes in their place once and for all. Ladies and gentlemen, I present to you: The Tier. 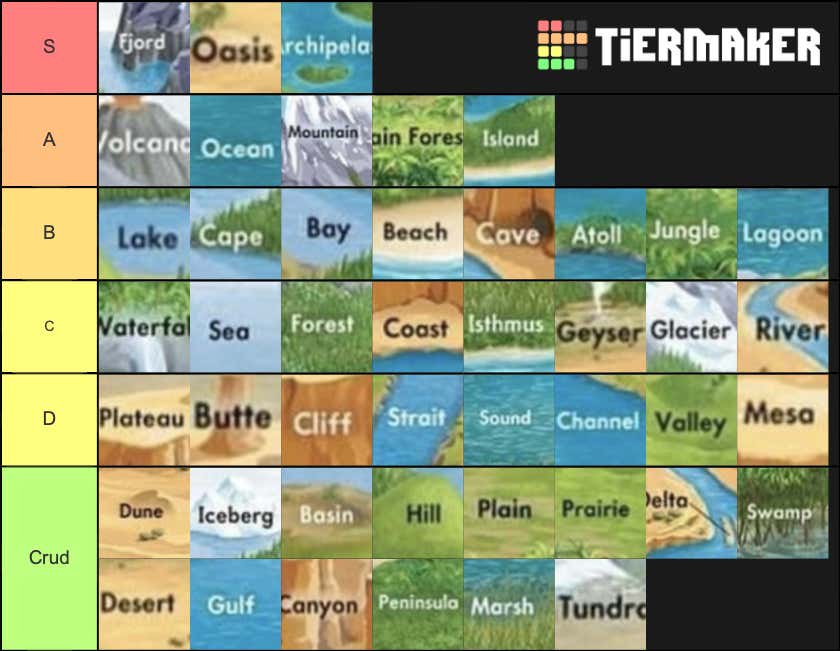 Far and away the easiest tier of them all. Typically the bottom tier is the one that comes easiest, since it's easier to identify trash than perfection, but not this time. Fjords? Are you kidding me? Gorgeous. Name something more refreshing than a desert oasis? Exactly, you can't. An oasis is a kiss from God in the middle of hell. Islands are top tier, this is know. "Well then, Coley, why is Island in the A Tier?" Because, dumb dumb, you know what's better than one measly island? A group of islands in close proximity, better known as an archipelago. The big man upstairs was in his goddamn BAG when he crafted these three. 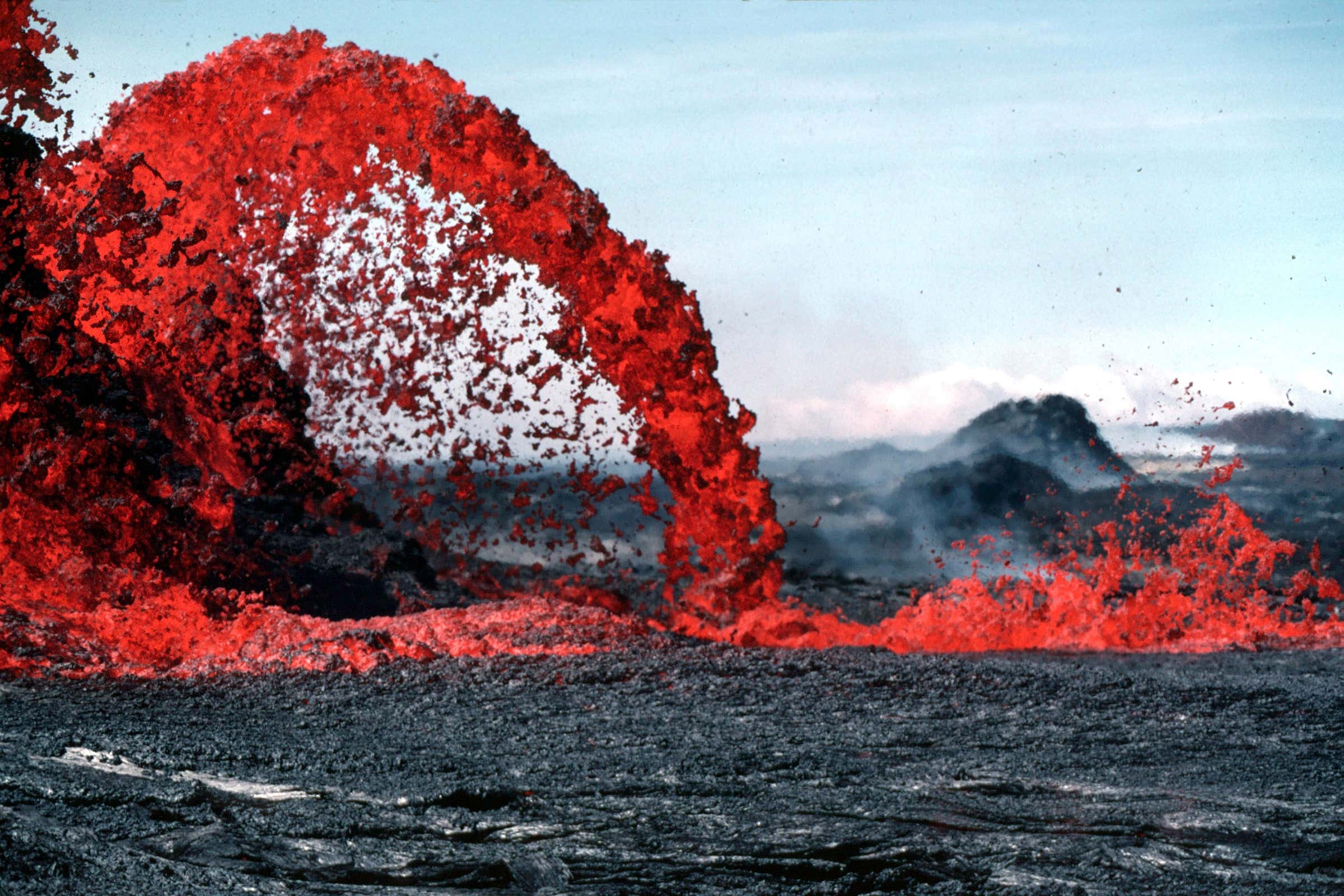 The A Tier has nothing to be ashamed of. The S Tier is reserved for the elite of the elite but the A Tier is like the first five off the bench for the Dream Team. No scrubs to be found. Volcanos and Mountains are birds of the same feather. Truth be told I think all mountains could be volcanos if they worked hard enough but I also respect them for just chilling out and not blasting molten rock and ash into the sky when they have a bad day. Oceans? Buddy this entire world is oceans. We know more about space than we do the ocean. We wouldn't be here without oceans and we certainly wouldn't be here without rain forests which, according to people last year when the Amazon was SUPER on fire, are the lungs of the planet. A single island has nothing to be ashamed of, it's just no archipelago.

Atoll Twitter was at my neck yesterday for ranking them below islands and archipelagos. But what those nitwits don't understand is that atolls just don't have enough meat on their bones to stand with the elites. If archipelagos, islands, and atolls were a trio of brothers atolls would be LiAngelo Ball. Jungles are cool, I could see them eventually climbing into the A Tier but not yet. Beach Stans were also chirping me. Saying they were the best part of the Ocean. LMAO. The Ocean is the best part of the Ocean, friend. Beaches have people, and if people could be tiered on here they'd be in the crud tier sans question. Caves have stalagmites and stalactites, undoubtedly cool features you can't credit many other landscapes with. Capes and Bays? Big time. There's a reason the Kennedys built their compound on a cape, because they are a family of wealth and class. Also, per Adam "Rone" Ferrone's request: coves are a delight.

Some lagoon fanatics were up in arms about being in the B Tier and they have a case to be made. Look at this sucker! 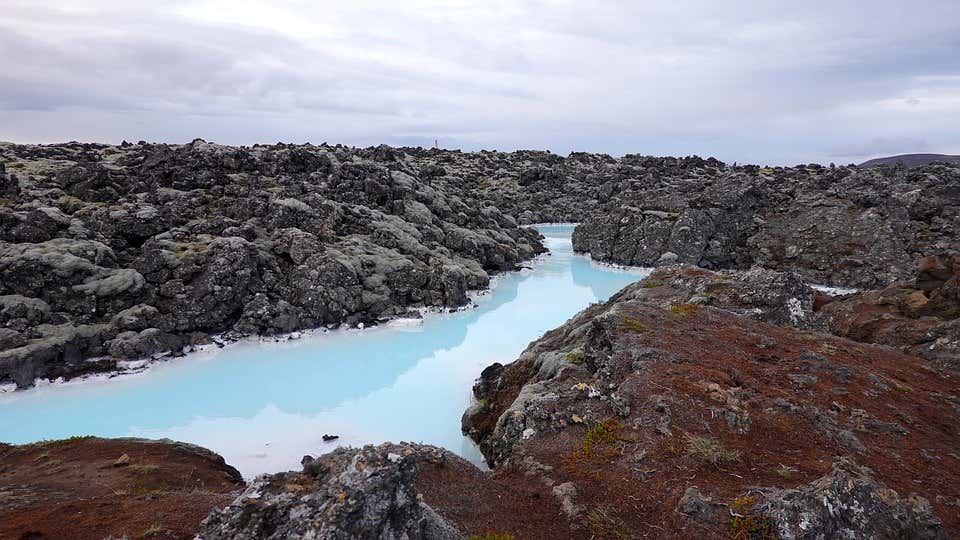 Gorgeous. Awe-inspiring. Tremendous. HOWEVER, those people conveniently forget that lagoons sometimes have murderous creatures that live to maim, snatch, and kill. That'll knock you down a tier every day of the week.

People are not happy with this tier. Waterfall Sycophants have been writing me emails nonstop. The Glacier Brigade showed up to my door at 4 AM with pitchforks and torches. Big Isthmus Lobbyists kidnapped my dog and mailed me a ransom note with cut up pieces of various magazines demanding I move them up multiple tiers. But I will never budge. I will remain strong in the face of adversity. An isthmus is nothing more than a land bridge and a nightmare for those burdened with speech impediments. Glaciers? Merely saved by being tied to a delicious Gatorade flavor, otherwise they'd find themselves in Crud Town with Icebergs where they probably belong. And Waterfalls. Fucking waterfalls. Nothing more than cliffs with a smidgeon of flare. It's like they forgot to finish the river and mailed in the ending. Waterfalls are the Season 8 of Game of Thrones of landmarks.

Plateaus are the very definition of middling nothingness. And that's what a lot of this tier brings to this tier. A "Meh" ass tier if I've ever seen one.

Cliffs are waterfalls without the aforementioned pizzazz. Buttes and Mesas can take a hike. Lonely hills with rookie Jaylen Brown flattops. I've no time for them, their isolation and independence is the only thing keeping them from being in Crudville with hills. Sounds? Channels? Straits? Pass, pass, double pass. The Jeff Greens of water. You want them to be one thing but they can never reach the heights of a sea or even a lake. Valleys, literally the textbook opposite of a peak. Death Valley would save them here if they didn't throw that name around so loosely that it's lost all meaning in this day and age. Sad.

I can't even begin to explain my disappointment with these pieces of shit. DUNES??? BASINS??? TUNDRAS??? Garbage, basura, giant dung beetle turd balls only being propped up and cared for by its creator. Canyons? Sick Earth holes, bro. Swamps literally stink. Plain roasted itself with its own name. Hills are great, said NO ONE EVER. Delta, decent airline, the most boring feature water has to offer. And peninsulas. Fucking peninsulas. How about you let go and get a job. Stop leaching off the main land, coward. Either be an island or don't. But don't come crying to me about how you're special because you're almost completely surrounded by water. This level of cowardice is what separates peninsulas from islands and that inability to commit to being one thing or the other makes me sick. It's 2020, bro, be whatever makes you happy, just make a fucking decision for once. I've but one thing to say about marshes and that is this: