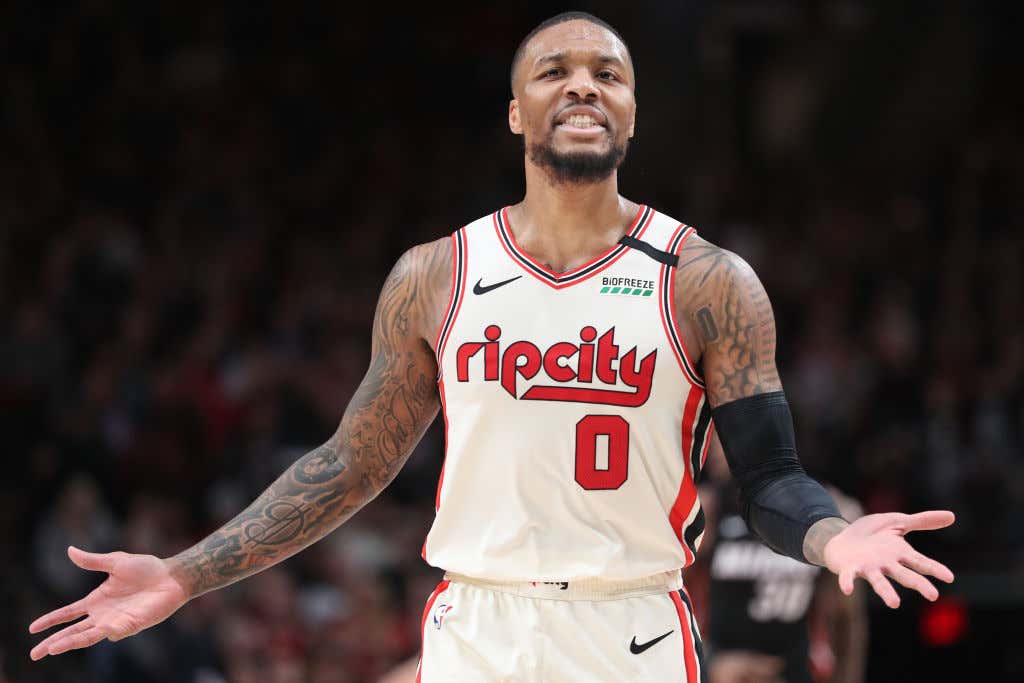 (Yahoo Sports) - If the NBA resumes the 2019-20 season by electing to play a handful of games with all teams just to reach 70 games to fulfill regional television deals, Portland Trail Blazers star Damian Lillard knows his next move.

"If we come back and they're just like, 'We're adding a few games to finish the regular season,' and they're throwing us out there for meaningless games and we don't have a true opportunity to get into the playoffs, I'm going to be with my team because I'm a part of the team. But I'm not going to be participating. I'm telling you that right now. And you can put that [expletive] in there," Lillard told Yahoo Sports on Tuesday morning via phone.

"If we come back and I don't have an opportunity to make the playoffs, I will show up to work, I'll be at practice and I'll be with my team. I'm going to do all that [expletive] and then I'm going to be sitting right on that bench during the games," Lillard told Yahoo Sports. "If they come back and say it's something like a tournament, play-in style, between the No. 7 and No. 12 seeds, if we're playing for playoff spots, then I think that's perfect."

On some level I can certainly understand where Dame is coming from here. His Blazers sit 3.5 games back of Memphis for the 8th spot in the West with 16 games left on their schedule, including a head to head matchup with MEM that was scheduled to take place on April 5th. It certainly was not a done deal that they would miss the playoffs had nothing happened and we finished the season like normal. So, if the plan is to come back and only play 2-3 games before the playoffs start or something like that and POR doesn't have that same chance to sneak into the postseason, that's a tough break. You then factor in Dame is coming back from a groin injury and I can understand why he wouldn't want to play meaningless games if there's no way for the Blazers to catch the Grizzlies.

But here's the thing. Yeah the Blazers have had horrible injury luck this season, but they are in this position mostly because they were god awful on the road this season. I'm talking 11-23 type shit. They have a -1.7 point differential on the season and allow the third most points per game in the entire West. They've had more than enough opportunities to not suck complete ass and find their way into the top 8, but they refuse to play defense. Nothing we saw during the previous 66 games tells us that they would have been a drastically different team that would eventually catch MEM. I mean they were 4-6 in their last 10 before the hiatus so it wasn't like they were running through teams.

I would guess that Dame isn't the only star player who feels this way either. Would the Pelicans just sit Zion if there was no path for them to catch MEM? What about guys like Bradley Beal, Trae Young, Devin Booker, De'Aaron Fox, etc. I think this may be a situation where even if there are let's say 5 ramp up games before the playoffs we'll see teams sit their best players, sort of like what we see in a normal regular season when teams are just playing out the end of their schedule before they hit their vacation. It'll be a bummer for a team like POR that was relying on this home stretch to try and squeak into the postseason, but again, don't be an absolute disaster on the road and on the defensive end for 66 games and this isn't a problem.

It'll be a shame though if Dame does sit out, because not only was he on a tear before the hiatus, but he is one of the most fun players in the entire league to watch

For him to say that the only way he's going to play again is if there is some weird sort of play in tournament just so it's fair for him, well what about for the Mavs? Dame wants the 7 through 12 seeds to compete in this idea. Well the Mavs are 40-27 and 7 games up on Memphis. Why should they potentially get boned in this weird play in idea where anything can happen in a single game? So their entire regular season meant nothing? That's trash. Just accept the fact that this was a down year for POR and if you wanted to be in the playoffs you should have played better during the season. Period.