Source - About 20 minutes after sunrise, just before 7 a.m. Tuesday, the luxury vehicles began rolling past the guarded entrance at Berkeley Preparatory School — a Tesla coupe followed by a Porsche and a Ford truck or two.

On the artificial turf football field, tucked away in a well-secluded enclave of the sprawling campus, Tom Brady and about eight of his Bucs teammates began a two-hour throwing session.

Brady wasn’t the only quarterback. But he was the only player wearing a bright orange practice jersey over shoulder pads with his Buccaneers’ helmet. ...

If you had any doubt that Brady wasn’t going to find a way for such a gathering when players can’t be together at a team practice facility due to NFL rules during the COVID-19 pandemic, think again. ...

Brady appeared to be the one organizing the route combinations and situational drills that Bucs receivers, tight ends and running backs ran for about 120 minutes Tuesday.

At times, like he did with receiver Mike Evans, Brady would walk through the route, showing players exactly where to make their cuts. ...

[A]pparently, while Berkeley Prep has been closed to students and faculty, the school opened its doors and football field to Brady and what looked to be most of the offensive skill players.

I don't want this. I don't care how amicable a break up is, you can wish your ex well, but it goes against human nature to want them to do so well. You don't have to hope they wallow in misery without you, bingeing "Golden Girls" with tubs of Ben & Jerry's and boxes of Merlot and crying themselves to sleep every night. But no matter how many good feelings you still have for them, no one wants to see the one who dumped them start running triathalons and look better than they have in years.

In Tom Brady's case, I don't want him working his ass off. I want him to go to Tampa to relax  and enjoy his semi-retirement. Now's the time he should be kicking back, taking Gisele and the kids to the beach, lounging by the pool at Casa Jeter and maybe having a nice steak from Don Shula's once in a while. Not grinding it out in the heat like he's ... well, like he's Tom Brady before he started blowing off Bill Belichick's OTAs.

On another note, I've made it my policy not to Covid Shame anyone, and I'm not going to break that now. Especially not for a man who's given me so many victories while asking only my loyalty in return. But is what he's doing allowed? Aren't they supposed to be staying apart, keeping to small groups and wearing masks? I mean, Berkeley Prep athletes aren't allowed to use the Berkeley Prep facilities their parents pay for, but Brady and Mike Evans and God only knows who else get to?

I'm not even mad. If I was an official in Florida and it was up to me, I'd be allowing the same thing. I don't blame them, I blame all the New England states for not allowing Jarrett Stidham to conduct the same exact workout. This is a fucking arms race. Weapons have to be developed. Stidham needs to get on the same page as N'Keal Harry, Julian Edelman and Mohamed Sanu every bit as much as Brady needs to get in sync with his skill position guys. And yet our governments are putting him at a distinct disadvantage. And it has to stop.

Then again, maybe it's all got to do with the fact TB12 Fitness has developed a new miracle elixir that will boost your immune system so nothing bad will happen.

Too bad the store at Patriots Place is closed, otherwise the Pats offense could be working out as we speak. Life is unfair and so is football. 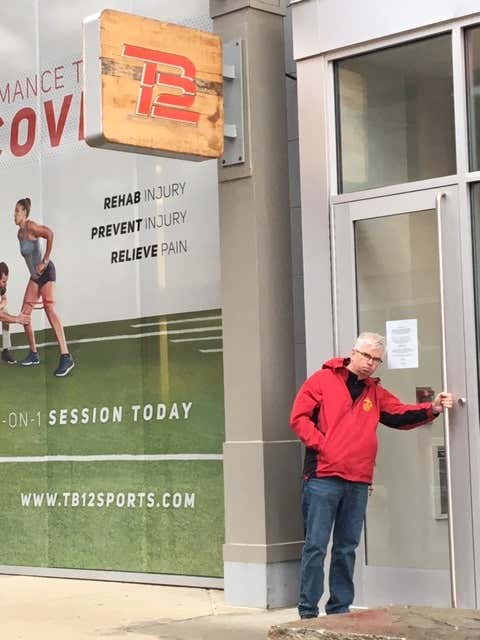