When I woke up today, I did not expect to see this insanely deep, destructive takedown of Texas Tech head football sent to my phone from an anonymous tipster. 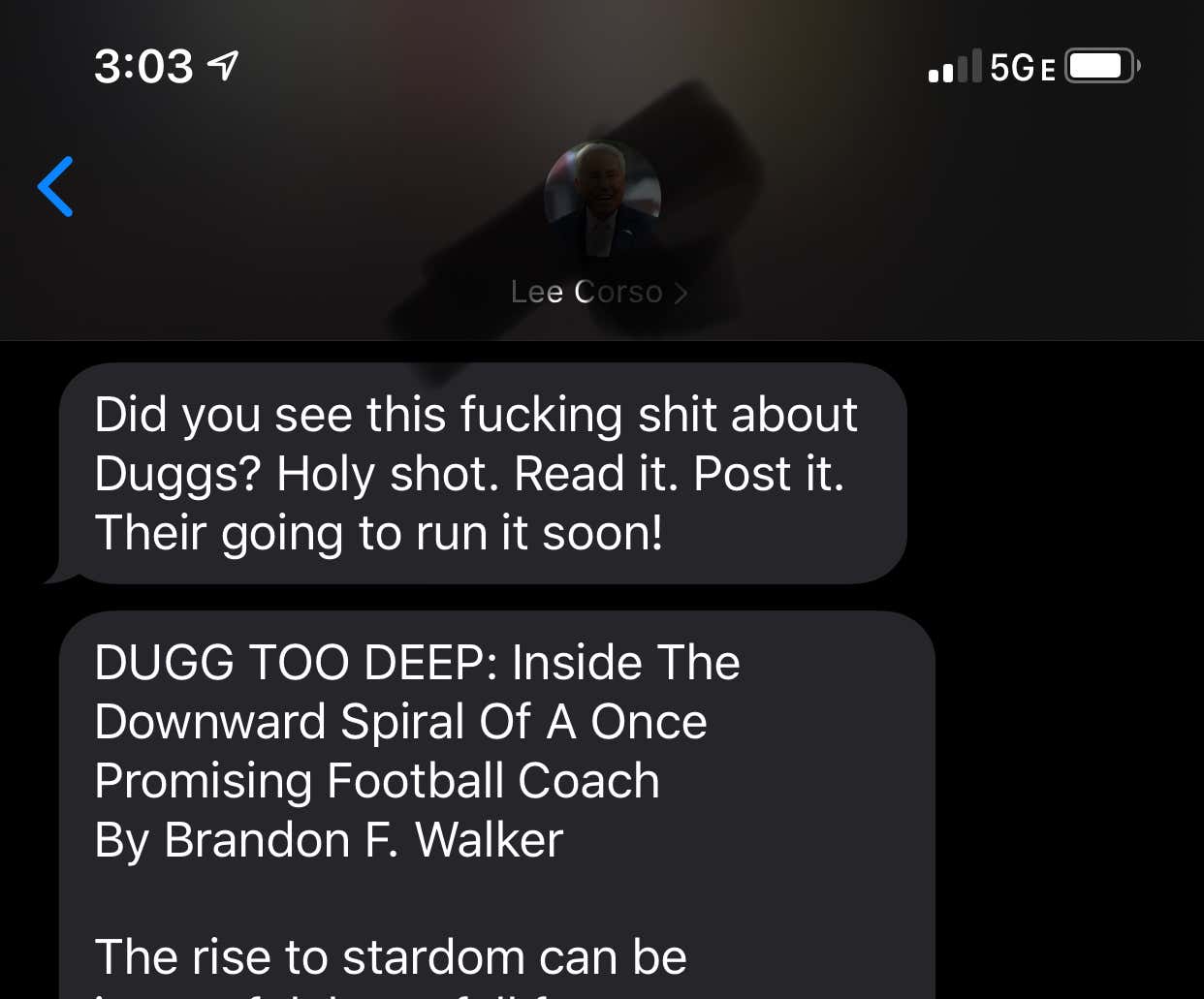 As a member of the Gus Bus and a big fan of Duggerton, I hate running this piece, but it is better to just get out ahead of everything.

DUGG TOO DEEP
Inside The Downward Spiral Of A Once Promising Football Coach
By Brandon F. Walker

The rise to stardom can be impactful, but a fall from grace can be even harder. For Gus Duggerton, the head football coach at Texas Tech, the fall from grace has left a crater in the college football world.

Duggerton’s lifestyle, which was jump-started by a one-year stint in Hollywood while coaching at the University of Southern California, was in shambles long before he made the journey to Lubbock, Texas, sources tell me.

The first-year head coach has reportedly been the main reason as to why Texas Tech’s promising season has gotten off to such a rocky start. With a massive rivalry game against the University of Texas Longhorns on the horizon, friends, family, and colleagues are beginning to wonder if he can pull it all back together.

“He’s a f***ing mess right now. During media days I heard he was found passed out in his hotel room covered in melted Ben & Jerry’s Cherry Garcia ice cream,” said one anonymous SEC head coach who also used to be an NFL head coach for a team in the AFC East.

Another anonymous tip from a fellow Big XII coach known for previously kissing players before games noted that in the offseason Duggerton would, “skip film sessions with the team and could be found watching episodes of ’90 Day Fiance: Before the 90 Days’ while eating whole, unshelled pistachios, shell and all, as he sat in his car.”

It also goes without saying that his public donut purchasing problem has negatively impacted his performance both on and off the field as a head coach.

Truly the sign of a man lost in the world of money and fame.

Before receiving a record-setting college football contract of 5-years, $83 million from the Red Raiders, Duggerton had built a reputation in Hollywood as an elite socialite. He went to Lakers games with Leonardo DiCaprio, dated both Jennifer Aniston and Courtney Cox, a feat not achieved in Hollywood since Counting Crows lead singer Adam Duritz did it back in the 1990s. Duggerton was even spotted multiple times around the Hollywood night club scene with his pals Adrian Grenier and “the other guy, not Charlie Sheen” from the hit show ‘Two and a Half Men.”

While everything seemed okay, if not a bit chaotic, things reached a boiling point according to sources when Duggerton stormed out of the premiere for the 2015 Johnny Depp movie ‘Mortedcai’ after reportedly receiving a “negative” call from his agent on potential jobs at Louisiana State University and the University Wisconsin. Paula Abdul, Duggerton’s date to the event and witness to his outburst, did not return our phone call for comment.

That brings us to the right now, for Duggerton and his lifestyle and status as college football’s premier head coach.

Can he pull it together? Rumors of a recent citation for public urination after drinking too many glasses of “unlimited refill” soda at a Fuddruckers, followed by smashing in his own car window suggest that Duggerton is far from being back to normal. But friend and former player from his Florida State days, J.J. Gandy tells us that he had a sit down with the coach over the weekend and thinks he is finally back on track.

Whether or not the Red Raiders head coach will wreck “em” or wreck “himself” remains to be seen, but one thing is for sure, Gus Duggerton continues to be must-see TV.

Truly, truly troubling, especially before a huge game against Texas on the horizon. I have no words, but I am sure Duggs will respond to the allegations soon.

Tune in tonight to see if Duggs can turn it around...