As I've mentioned, the AskReddit subreddit is a good place to peruse if you're looking to kill some time. I've been blogging some of my favorite threads that have grabbed my attention. This one caught my eye and reminded me of the early days of Common Man Radio, where we would take calls from people who would then describe their mundane jobs in great detail with soft music in the background. I miss it. Anyway, this thread has helped somewhat fill the void. Let's look through at some of the weirdest jobs we didn't know existed.

I would personally err on the side of this being gross. You have to wonder what possesses someone to say, "You know what I want to do when I grow up? Take eyeballs out of dead bodies."

Imagine going on a first date and telling the girl "I'm a junior cheese evaluator." Laugh out loud funny to picture that title heading someone's LinkedIn page. Apparently there's way more to cheese than we think. Also shoutout to the great pun in the reply.

This is something I've never really given much thought. I guess you don't picture a real live human sitting down and typing every word of a live broadcast as it goes, but that's apparently what QuokkaMocha has to do. I wonder what the hierarchy is between them and court stenographer. Who gets jealous of who? Is one considered like the dentist of the industry? The ugly duckling always fighting for respect? Fascinated by this dynamic.

I would've sworn chimney sweeping was a job strictly for 13-year-olds in the 1800s.

A silent guardian. A watchful protector. It's people like this who quietly keep the wheels of society turning.

And you thought farmers having to milk cows had it bad? How about this fucking guy who had to jerk off pigs? The pay is solid though so maybe it's not the worst job in the world. I'd never look at a strip of bacon the same way again though. 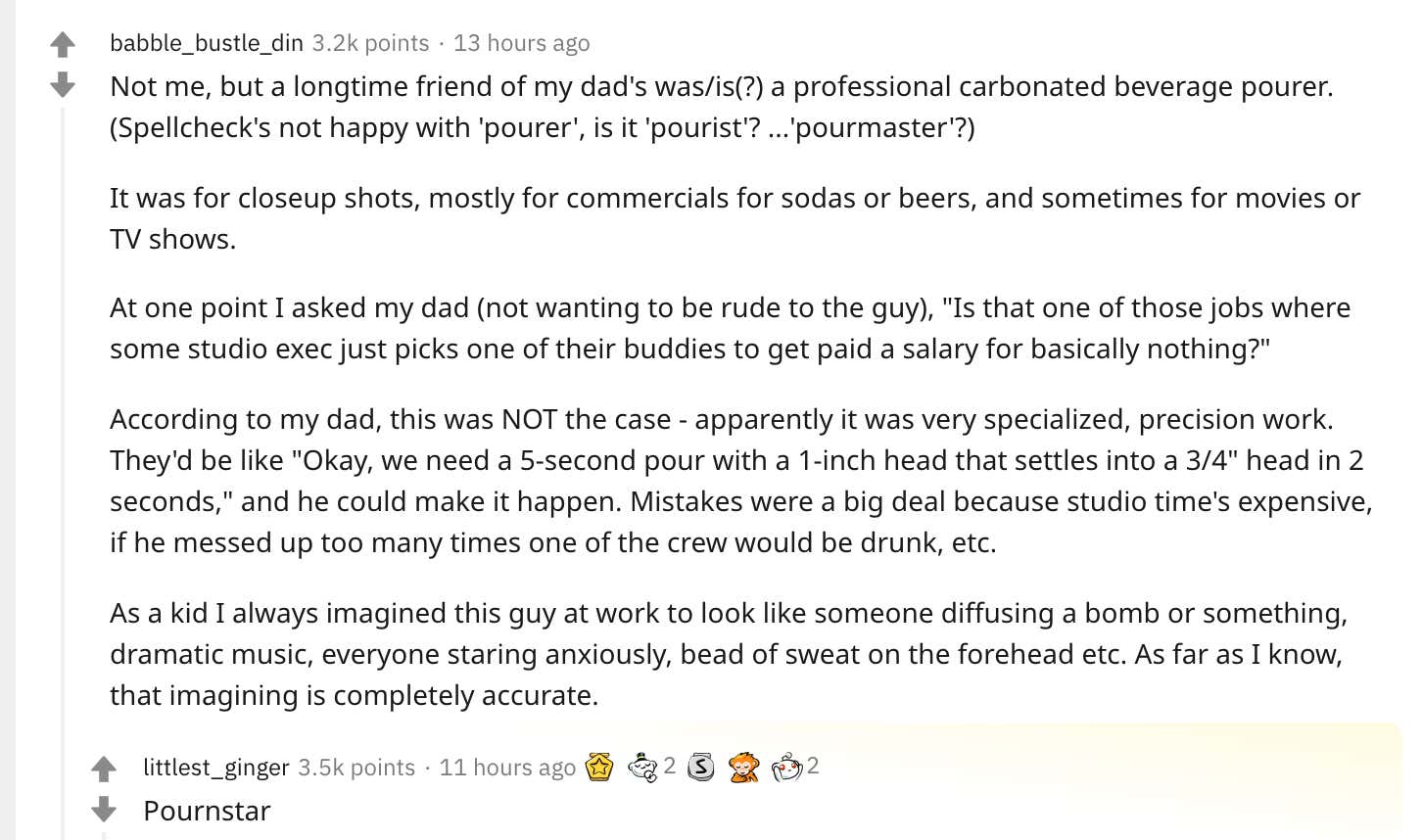 This is incredible and my favorite one yet. Another thing I've just simply never thought about. An entire operation riding on one man pouring a drink just right. Hundreds of people on the crew waiting on pins and needles to see if he'll pull it off. "God damn it, Craig has done it again. That's why he's the best in the business!"

I can see this being instituted for Dave and Barstool. Perhaps it would stop a future Avocado Ross situation from arising.

Sounds like a spinoff Undercover Boss series, except maybe illegal?

Extremely reassuring to know that a guy with the Reddit username "thechickenfucker" is the one making sure our bridges are safe.

What are some other weird jobs you/people you know have that most don't know even exist?