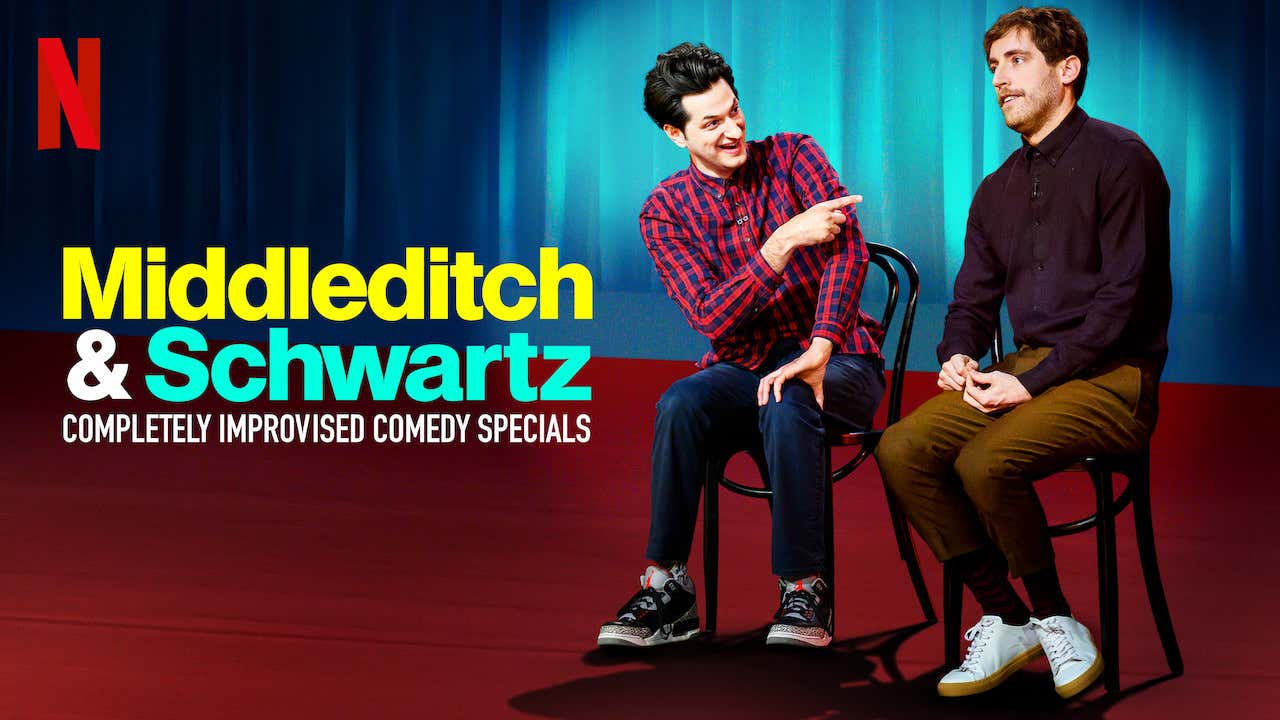 We're now two months into quarantine and finding new things worth watching is becoming more and more difficult. Well if you're looking for a new suggestion and have not seen it yet, let me introduce you to Middleditch & Schwartz.

Middleditch & Schwartz has been out for a couple weeks on Netflix. It's gotten some attention for sure, I know I've seen Robbie and Chaps both tweet about it, but I feel like not enough other people are talking about. The "series" is three completely improvised comedy specials that last about 50 minutes each. I enjoyed it so much that I wish there were ten episodes instead of just three, but I'll take what I can get.

You probably know Thomas Middleditch best from starring in Silicon Valley and Ben Schwartz is most recognizable as Jean-Ralphio from Parks & Rec, but both have done a bunch of other stuff, and they've been doing improv comedy together for awhile. This is the first time it's getting filmed and being distributed to a mass audience, and it did not disappoint.

Without giving too much away, each episode starts with the duo picking out someone in the crowd who yells out something coming up in their life that they're either excited for or dreading: a wedding, a law school exam, an interview, etc. After asking just a few questions to flesh out some details, Middledtich and Schwartz then put on an entire show just based around that scenario. They make up characters and plot lines as they go along. Nothing is prepared. They just have a natural chemistry and incredibly creative minds to make it all work.

I've been watching a lot of comedy during quarantine, but it's dominated by stand-up and sketch for the most part. People often associate improv with their annoying friend who took one improv class at a local theatre. But when done as expertly as these two do it, it's impossible not to enjoy. You can tell they are genuine friends that enjoy riffing off each other, and my favorite parts are when they get so lost in the stories that they have to step back and remind themselves what exactly is happening or who's speaking.

I can only talk it up so much, but here's a trailer that also doesn't really do it justice.

All 3 episodes on Netflix so start watching.

PS: Ben Schwartz gives me major Rone vibes. Something about the way he carried himself and spoke had me thinking of Rone the entire time. My friend who's not even a big Stoolie and only knows Rone from Pup Punk concerts said the same thing, so maybe there's something to it. Something to keep in mind as you watch it.