A chicken may seem like some little innocent bird that simply screams 'cockadoodledoo' at sunrise, lays eggs the rest of the time, and nothing more - at least that's what I had previously thought. Chickens never even crossed my mind as a potential threat, I just kinda thought they were rather harmless animals.

(CNN)Police in Louisiana urged residents to be on the lookout for a suspect that has been terrorizing bank customers in Walker.

They warned that the suspect is ignoring social distancing rules and the orders of Gov. John Bel Edwards by harassing customers at the ATM and drive-thru, chasing people and trying to get into vehicles.

The suspect -- an "aggressive chicken" -- is described as reddish-tan, 18 inches tall and between 6 to 8 pounds, the Walker Police Department said in a playful post to Facebook. 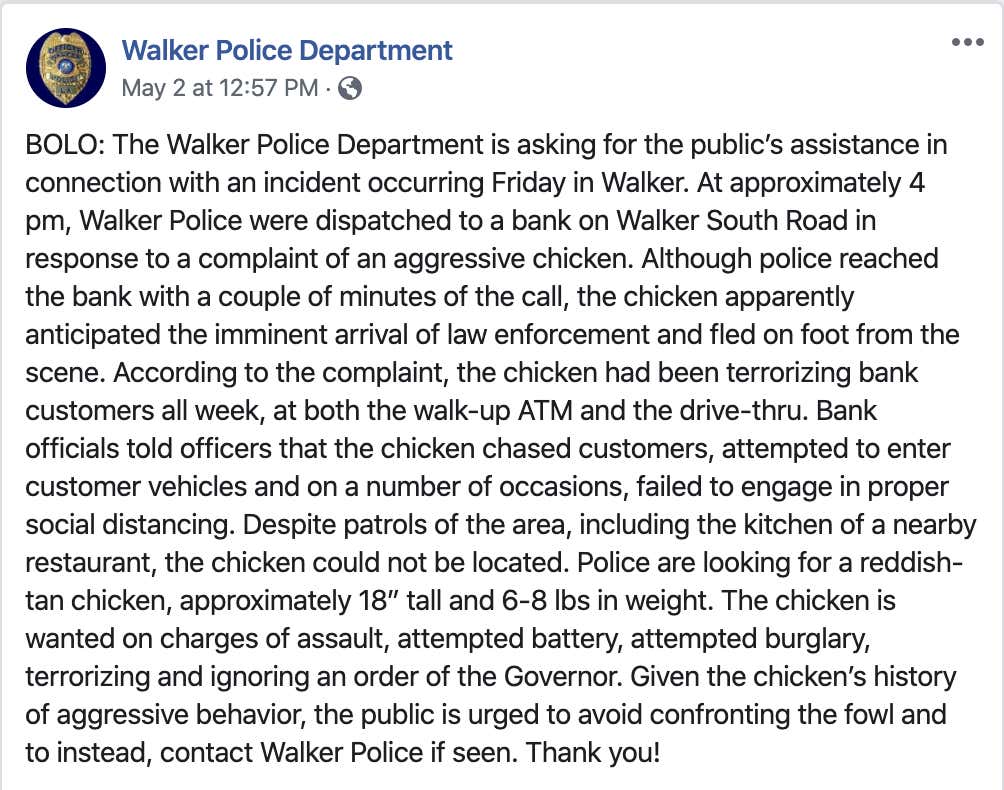 Terrorizing bank customers? Where do these chickens get off? In the middle of a pandemic, no less!

While the thought of middle-aged Louisianans struggling to get away from a chicken is admittedly hilarious, this is no laughing matter. These people could've been seriously hurt. Imagine if one of these chickens was a rogue fight chicken that still had blades attached to its legs and it decided to slice n' dice some poor woman's face? I'm sure that'd be reeaaaal funny, wouldn't it? It'd be a real egg on that bank's face for not keeping their location secure, that's for sure.

My biggest question is how are people at the drive-thru getting attacked? Aren't they in a fucking car? The post says something about the chickens attempting to get into the vehicles but I can't tell if it's sarcastic or not. It was definitely just flapping its feather in a few faces at the drive-thru. Hmm. If only there was a way to roll up your windows and prevent the chicken from coming in contact with any humans.

Seriously though, who calls the police about a chicken problem? That seems like more of a personal problem than anything but who am I to judge. It just feels like a family day project more than a police case. Are the police supposed to show up, wave their magic wand, and make the chicken just disappear? No. By the time the police had shown up, the chicken was already long gone. That chicken was probably in a different area code by the time they were done dialing 911. Not even a spare feather to be found.

Officials said the chicken is "wanted on charges of assault, attempted battery, attempted burglary, terrorizing and ignoring an order of the Governor."

The bird remains on the loose. While police asked for the public's help locating the fowl, they said people should avoid confronting it because of its history of "aggressive behavior."

Speaking of aggressive, this seems a bit much. Drawing up fake charges for a bird that'll probably end up in a #2 combo is entirely too much. It was fun and games when the police were making jokes about the cock's lack of social distancing but this - this is overboard. Besides, there's nothing to prove any of those charges. That bird would walk away scott-free on all of those charges besides the ignorance of a governor's order.

I guess this is just a valuable lesson to everyone that we need to stop underestimating chickens. They are much, much more than a tasty treat that comes in nugget form. They are literal felons.