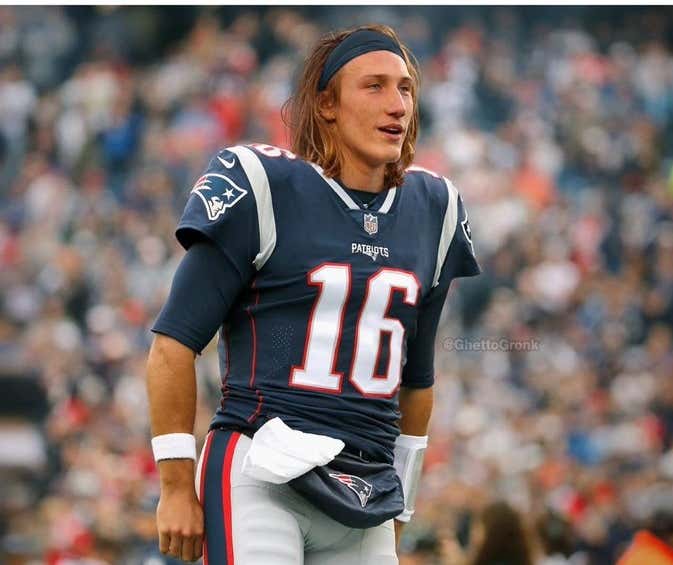 Back in January, you might recall, a week or so after the Patriots had their earliest playoff exit in 10 years, one of the two newspapers in Boston declared that, if Tom Brady should leave, the smart and prudent thing for the team to do is swim for the bottom:

No reboot. No finding a different, non-Brady way to keep winning, like a balanced offense and a commitment to defense and special teams. No orderly transition to a new quarterback. Just grab a cannonball, jump overboard and blow bubbles behind you to make the death come as quickly and painlessly as possible.

And I get it. For the better part of 20 years there hasn't been a major talent like Trevor Lawrence who hasn't as some point been the subject of speculation the Patriots would figure out a way to get him. College or pro. You can't be a Top 10 draft prospect without somebody at some point saying Bill Belichick is putting together a package of picks to move up and get you,. Even though it's never happened one time. The rumor they were swing a deal for Larry Fitzgerald used to be a sign of spring around here. Then later it was Calvin Johnson, even after he retired. Not two weeks ago there were reports the Pats were going to move up into the top of the first round to get Justin Herbert. Cue the picture of Belichick drinking orange juice.

And to me, it makes sense in a sort of human nature way. It's deep in the race to tell stories about scary boogeymen that are coming to get us in the dark. From Beowulf to the Navajo skinwalkers to Bigfoot to Carole Baskin. It's a fear that is primal, which makes the threat real even if it doesn't actually exist.

Which brings me back to Trevor Lawrence and the Patriots. The Athletic (paywall) did a wrap-up of the draft for all 32 teams, and it includes this little nugget from someone identified as "an AFC evaluator."

“I’m a little worried that [the Patriots] are tanking for Trevor Lawrence."

Now, to be fair, another said, “The takeaway is, they like Stidham and they believe he is the next guy," while correctly dismissing any notion they would be interested in Andy Dalton. And something I like even more was this quote about  Devin Asiasi:

“Oh, I love him,” an exec said. “I think they hit a grand slam, but he fell to them for a reason. He was suspended. The character is concerning (he was suspended to start the 2018 season). But he is better in and out of his breaks than (Cole) Kmet and a better blocker right now. He is a more vertical, wider-angle cut receiver.”

I like the sound of "grand slam," "better in and out of his breaks," "better blocker," "vertical" and even "wider-angle cut receiver" even if I have no idea what that one means. Given some recent history around here, I'm a little gun shy (pun 100% intended) about tight ends from big schools with character concerns. But still, I'm all:

But back for a third time to Trevor Lawrence. I'll say what I said in January about the idea the Patriots would tank for him or anyone else is laughable. Absurdly, profoundly, laughable. I might talk like there is no limit to what Bill Belichick is capable of, but he is not capable of that. How does anyone in their right mind think this guy would even know how to lose the games necessary to land this kid?

I'll cite again the example of the one time he actually wanted to lose a game intentionally. It was Week 17 of 2005, against an 8-7 Dolphins team. If the Pats won, they faced Pittsburgh in the Wild Card round. If they lost, they got Jacksonville. So Brady came out of the game at the end of the 1st quarter after attempting just eight passes. Matt Cassel came in an threw 20 times. And with Miami up comfortably 28-20, Cassel led them to a touchdown with no time left. And on the two-point conversion try that could've tied it up, he dutifully hit his target: One of the Minutemen 20 yards out of bounds. Belichick wanted to lose that one on purpose and still nearly fucked up at fucking up.

So the idea that he could possibly take a 12-4 team and somehow lead them to somewhere near 0-16 is to ask the impossible. If the Messiah was draft eligible, lifted the entire planet 30 times at the Combine, ran a 40 that bent spacetime, turned in a sub-7.00 3-cone drill just for laughs and Mel Kiper said he not only would bring peace and lead us all to everlasting life while also having a plus arm and pro-ready pocket awareness, Belichick would still rather win the AFC East than lose in order to draft him. He wouldn't Lose for the Lamb of God, he's not about to Tank for Trevor. Period.