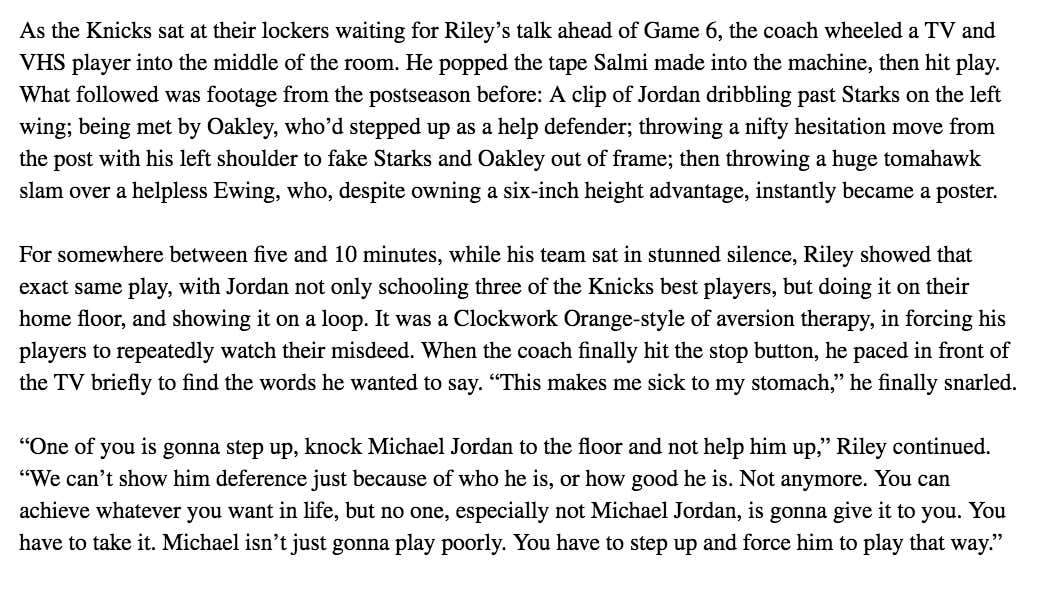 God dammit! I've spent all day trying to stop the emotional bleeding from the sports scab ESPN ripped open by showing the Charles Smith play last night. Yet here I am not only gushing blood again but falling back in love with Pat Riley AKA Pat The Rat AKA The Satan Of South Beach.

I still get a visceral reaction when I see that dunk just because it sums up just how much better the Bulls, and in particular Michael Jordan, was than the Knicks succinctly in one play.

MJ cooked our beloved scrappy shooting guard, dusted our enforcer, and snatched our franchise player's soul from his body all in 5 seconds flat. If I get sick to my stomach seeing that play that I didn't even see in real time, I couldn't imagine being the three guys that got embarrassed on that play (with one of them being the baddest man on the planet).

Yet Pat Riley trying to pick up the pieces of that dunk and weaponize all the mean motherfuckers in that locker room Herb Brooks style is why those Knicks teams played way above their ability under him. That's why he won that title in 2006 (along with an assist from the regs). That's why he got LeBron James and 2 more titles to Miami. That's why the Heat are always in the mix to go from rebuilding to contender at any given moment. And that's why the Knicks have never hit 60 wins since he faxed his resignation like a fucking snake, no matter how much better his career and life turned out by ditching New York for Miami.

Now if you will excuse me, I have to go jump off a the highest bridge over the shallowest body of water after not only blogging about the Charles Smith play and this Jordan dunk in the same day but also fondly remembering Pat Riley.