Previously in our "The Last Dance" complementary Fuck Series:

I obviously knew tonight was coming for a while, like seeing a light at the end of the tunnel but knowing damn well it is a train getting ready to flatten you like a pancake. And it did.

The first sports team I ever fell in love with was the early 90s Knicks because that's when I happened to start really liking basketball. I'm sure Michael Jordan had something to do with that since I remember how being the first of have a new pair of Jordans instantly catapulted you into the conversation of being one of the "Cool Kids". But being a New Yorker that is loyal to the local teams to a fault, I became a Knicks fan during the early 90s. Looking back, maybe I should've gotten into hockey instead since one of my first memories would have been a Rangers Stanley Cup Champion.

Instead I took the Orange and Blue while unwittingly signing up for the annual right to have my guts ripped out during the spring. If that wasn't bad enough, I was surrounded in school by a bunch of hyenas that rooted for the Bulls because MJ was the coolest person in the universe. Not only did I have to hear about the Knicks losses, but I had to hear about my team's star Patrick Ewing being objectively one of the 10 or so ugliest people in the world that also sweat BUCKETS from before the National Anthem all the way through the end of the game. Rooting for tough guys that didn't give a fuck like Charles Oakley, Anthony Mason, and John Starks was fun. But not as fun as rooting for the team that had held up the trophy every year.

Despite all that, I still remember the Knicks having a chance to take down Michael Jordan and the Bulls after jumping out to a 2-0 series lead. Then the media had to go out and motivate the craziest lunatic in sports by calling out his gambling competition problem.

I know we live in a time where anybody with a microphone and a blue checkmark is criticized or called fake news if they call someone out because we live in a digital hellscape. But fuuuuuuuuuuuuuuuuuuuuuuck every single media member that decided to tug on Superman's cape who was hard enough to beat when he wasn't furious because a gambling story was salacious and it was MJ's turn for the media to tear down the star they helped build like they do with everyone. I know if LeBron went to a casino in between games and lost, Skip Bayless would cum himself live on TV while every sports media outlet would cover that shit 24/7 with a red BREAKING graphic

Of course the Bulls battled back by winning the next 2 games of the series with MJ almost putting up a triple double in Game 3 despite 3-18 shooting (h/t 16-17 free throw shooting) and 54 points in Game 4.

Then of course came the crucial Game 5, which I still remember feeling like the biggest game of my life at the time, which of course resulted in this abortion of a play.

Fuck Charles Smith for not being able to get the ball in the bucket. Fuck the refs for not calling a foul on the NBA's golden team despite this alternate angle of the play that ESPN dug up

I also hate to say it, but fuck the 90s Knicks for always fucking up in the biggest spot possible as always. Everything about that play from it seemingly breaking down with Starks' pass to Ewing to Ewing fumbling to ball to Charles Smith to Charles Smith sealing his legacy by not being able to hit a layup. Those Knicks teams remain my favorite teams that never won a championship. But fuck they always shot themselves in the foot whether it was Charles Smith missing 100 layups in a row, giving up 8 points in 9 seconds to Reggie Miller, or being part of a bench clearing brawl that caused pretty much the entire team to get suspended in what would've been their last shot against those Bulls.

The only thing that makes me feel better about that play is that even if the Knicks won, I have no doubt in my mind they would've fucked up in Game 6, Game 7, or The Finals because that's just how their DNA worked. Those 90s Knicks also prepared me for life as both a Knicks fan and a Mets fan, so thanks for that and the infamous Starks dunk that was ultimately worthless I guess?

Honestly, the worst part about last night wasn't watching the Bulls beat the Knicks and knowing the Knicks would never get that close to taking down Michael Jordan again. It was just how good the Knicks used to be before James Dolan took over after the 99 Finals.

I would give anything to feel devastating pain in May or June again instead of that blah meh feeling after Christmas or to hear The Garden sound like that during a humongous playoff game. James Dolan should be thrown in jail and charged with Crimes Against Humanity for every one of the millions of Knicks fans he has tortured the last 20 years. Fuck him and fuck every single one of those Bulls fans that then becomes Lakers fans, Heat fans, Cavs fans, or even worse Knicks fans as they got older. Fuck the NBA. Fuck ESPN. Fuck coronavirus. Fuck life. And fuck death for taking Anthony Mason while we're at it. Fuck everything.

P.S. The Knicks beat the Bulls in 1993 if this guy is New York's starting point guard. The true Jordan Stopper. 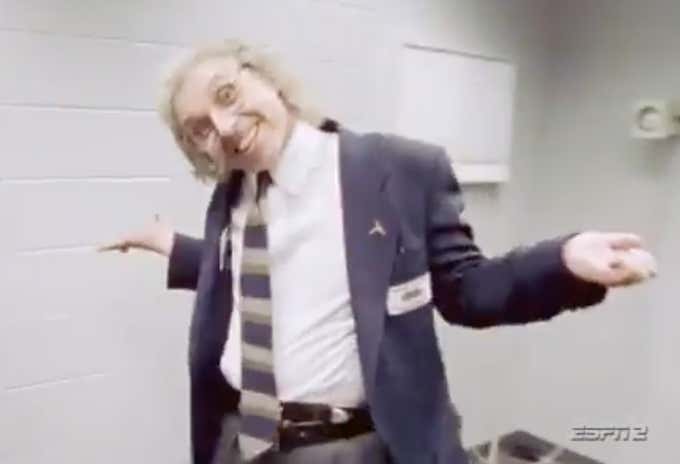