Jeremy Schneider was nice enough to make a vegetable bracket. I say that, as well as his name because that's where any inquiries, comments, or concerns about seeding should be forwarded. Thanks!

Light work. Kale is the only superfood that everybody eats but nobody likes. Very super. Meanwhile, onions make every single thing you add to them better. Except for your breath. Can't win em all.

Yall eating eggplant for real? In HARLEM??? Smh. It's wild how many foods there are in the universe and only one of them makes your piss smell like asparagus. The first guy that ate it must have thought his body was rotting from the inside out, then found out he was fine and sold every spear he could find for profit.

This one was over before it started. Cauliflower was a 9-22 team that somehow won their conference championship. They're here but everyone knows that they shouldn't be. Sweet potato's third unit is in and they're still extending the lead.

Before I even started this, I looked to see where Potato was seeded because I knew they were primed for a run. Bok Choy just got a bad draw here.

This is the game that no one watches on TruTV at like 3:15 pm. It's in between all the other good games.

I know our Junior Draft Analyst Steven Cheah has my back here. The endless broccoli occasionally at a restaurant is a nice touch. I've never wanted unlimited carrots. Or even one carrot, fuck outta here Bugs Bunny.

Our first upset! I was getting concerned because everything was going chalk. Bell peppers' versatility makes them the easy choice here. You can put them in other stuff or put other stuff in them. Wow!

Nobody but Popeye or Jack Lalanne is picking spinach here.

Asparagus makes your pee stink. Onions make your breath stink. A wash there. But again, onions make everything else better. Asparagus doesn't make anything better. Even if you like it.

Probably the championship game we all wanted and deserved, only way too soon. Baked? I'd give Sweet Potato the nod. But I think old faithful Potato is better at just about everything else.

Whether you like or dislike Broccoli, you can agree it tastes like something. Adding Tomato to your sandwich is basically saying you want to add mushy water to your sandwich and you're not quite sure how. Broccoli in a laugher.

Another upset! Again, give me the versatility of the Bell Pepper or plastic kernels on a COB of some sort. Popped corn is good, I do admit but Corn just doesn't have the horses here. Bell Pepper advances.

An upset but not a surprise, right? Onion makes every dish better but Potato is the dish! Or it can be the side, or it can be used to make a dish better! Just too many different powerful looks for Onion to overcome.

How far will Broccoli's run go?? 10-year-old me would whoop my own ass if he knew I was going to grow up and write such. I hate it had to come to this but Broccoli got bad PR when I was a kid. Every commercial had a kid spitting out her broccoli or turning up his nose at the sight of it. And the name "Broccoli" itself is a F-. And still, it overcomes all that to be a valuable side dish or base for casseroles. I'm not eating that shit but somebody is.

Was there any doubt? Potato was a vegetable of destiny! Fried, mashed, baked, wedged, boiled, roasted. There are just too many options. You can go tater tots or mashed or GARLIC mashed if you're feeling like a bad bitch. Potato salad, potato soup, potato bread, potato skins, potato chips. I feel like Bubba goddamn Blue. But you get the point, Potato cuts down the nets. 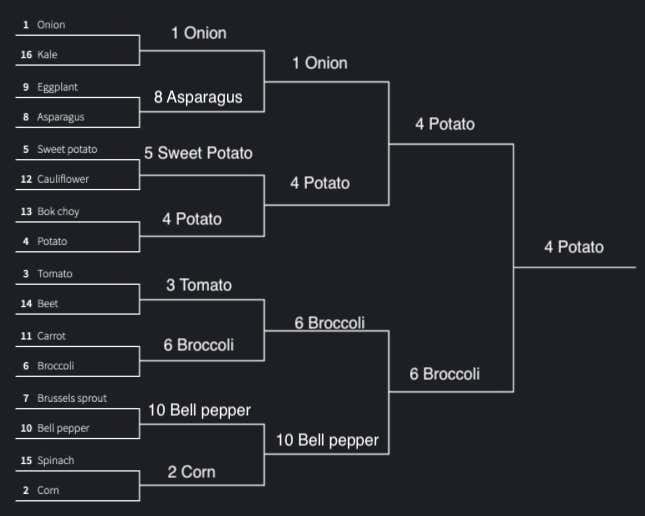