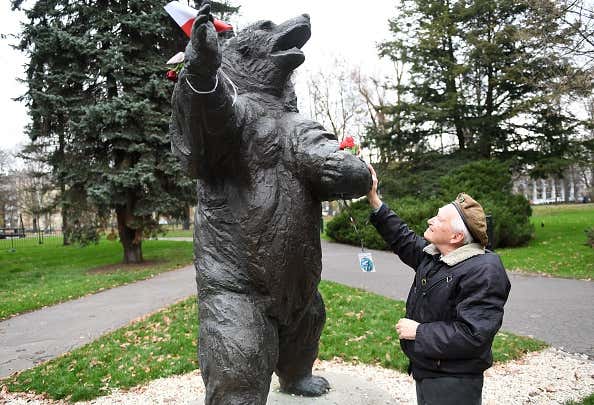 Yesterday on radio, somehow we started talking about Travis the Chimp and the Gombe Chimp wars of the 1970s and it made me think of Wojtek, the Polish Soldier who just happened to be an adorable Bear. Nobody in the room had heard of Wojtek, which is a shame because he is so sweet.

After Hitler lost his god damn mind and decided to invade the Soviet Union, the Soviets released a bunch of Polish POWs and they formed a military unit. When that unit was traveling through the Middle East in 1942 they came across a young boy who was caring for this infant and orphaned Bear Cub. The Poles thought he was just the cutest and they arranged a trade with the kid and took custody of the Bear, and named him Wojtek which means "happy warrior".

They raised Wojtek as one of their own and he became one of the boys. Wojtek would sit around just ripping cigs(sometimes eating boxes of them), gassing beers, and wrestling around with the guys

Wojtek was a beauty. Everyone in the 22nd artillery supply company LOVED him. He was great for morale and he went everywhere with this Polish company. More than a mascot, he was their buddy.

Eventually as WW2 went along, the 22nd artillery supply company got folded into the British 8th Army. They found out about Wojtek and were like "hey you dummies, you can't have a fucking Bear in your camp and feed him army rations and waste time and energy caring for him". Fucking Brits, sticks in the mud. Instead of getting rid of Wojtek like the British told them to, the Poles went the other direction and officially enlisted Wojtek in the military. Paper work and everything.

Brits: I thought we told you to get rid of that bear?!

Brits: Are you MAD?! That bear sitting right there getting drunk off our ales?

Poles: I don't see a bear

Brits: BOLLACKS! HE IS RIGHT THERE

Poles: Ohhhh that isn't a bear. That is a soldier. That is Private Wojtek.

And then I imagine the Brits storming off in a huh spilling their tea on their uniform.

At this point the Poles had to have a talk with Wojtek. Like, hey man, we love you but we are at war and the Brits are watching your ass now. You gotta start pulling your weight around here. Wojtek agreed. He cut down to one pack a day and mixed in a few waters here and there and before you know it he was one of the best privates in the company.

As the War moved from North Africa to Italy, the Poles fought more and more and Wojtek was thrown into the Battle of Monte Cassino, the Battle for Rome. A HUGE battle in WW2. It was actually four battles in one and the Allies had over 100,000 casualties. Wojtek was not one of them. He would use his giant bear strength to carry and delivery boxes of ammunition to his comrades. Those ammo crates were 100lbs and Wojtek never dropped any of them. His work at Monte Cassino made him sort of a celebrity and he was given a promotion to the rank of corporal.

After the War, Wojtek lived out his days as a happy bear at a zoo in Scotland. He died a hero at the age of 21 in 1963. He has statues in Poland and appears on some of their military insignia. Wojtek, one of the greatest bears to ever live.

Have a good day.