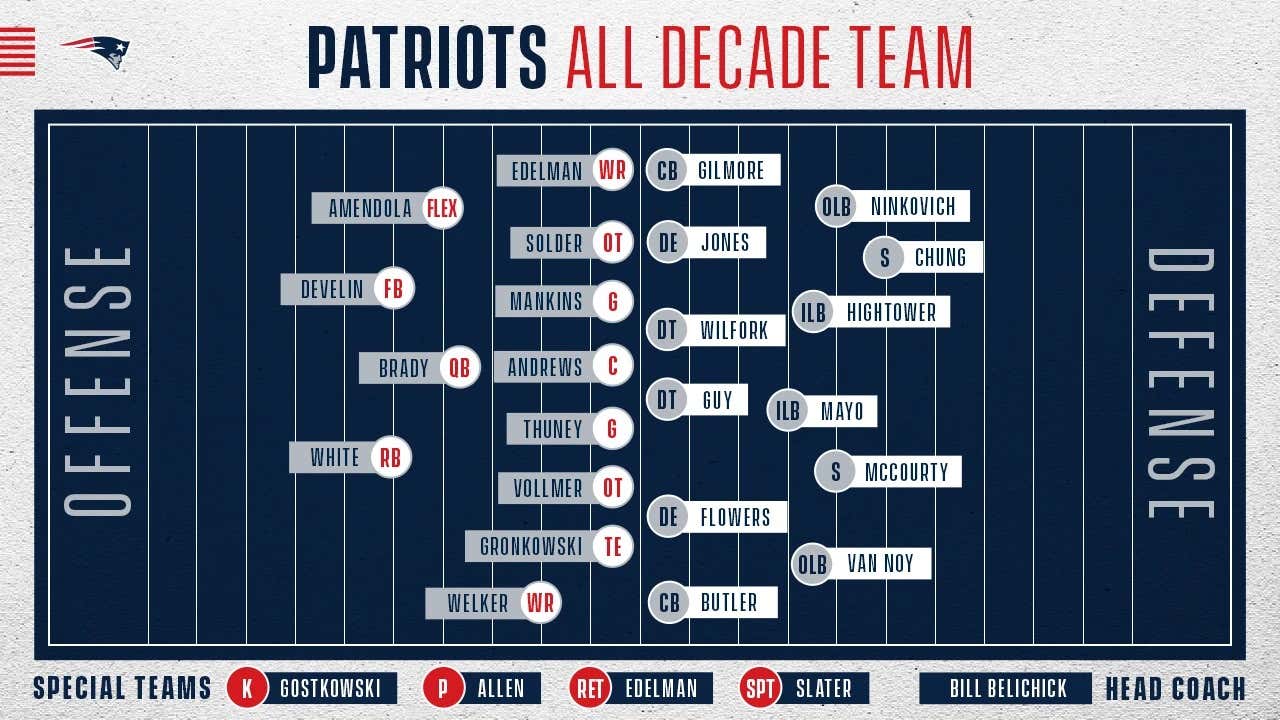 The 29-position All-Decade Team consists of 12 offensive players, including a flex player, 12 defensive players, one kicker, one punter, one returner, one special teams player and a head coach. Julian Edelman earned two positions on the team, one as a wide receiver and the other as a returner. He is the only player to be selected at two positions. Of the 28 representatives on the team, 16 were unanimous selections. Five of the members were also members of the 2000s All-Decade team. Quarterback Tom Brady, guard Logan Mankins, wide receiver Wes Welker, defensive lineman Vince Wilfork and head coach Bill Belichick have the distinction of being selected to both teams.

... where you've got to sit across a desk or stare into a camera and passionately scream at someone about hideously wrong they are and how objectively right you are. Because sometimes there's nothing to scream about. Sometimes there is no aggrieved party you've got to righteously defend with your last breath. Sometimes the world simply gets it right. And I can't fake it enough to generate many British Thermal Units of Hot Take heat when that happens.

I mean, try to find for me the grave injustice being done here? Usually in any kind of exercise like this, there are debates aplenty. Any All Decade team, All Star team or awards season should generate more arguments than the third glass of wine during dinner with my in laws. The way the Baseball Hall of Fame ballot used to before it degenerated into steroid talk and how every vote a 2000s Yankee doesn't get is a crime against humanity. But where do I find the wrong on this one?

I suppose you could nitpick some of them. For instance, Wes Welker only had three seasons in New England this decade. But since he had 326 receptions in those three years and he and Julian Edelman are the only wideouts to have more than 80+ receptions in any year of the decade, it's a no brainer. Sorry, Brandon LaFell, Brandon Lloyd, Brandin Cooks and any Brandon/Brandin I might've missed.

You can't really make a case for Aqib Talib or Darrelle Revis over Malcolm Butler on the basis of their drive-thru careers in New England. For three seasons he was a Top 20 corner in the league, at least. And the fact he did a little thing like provide the best single play in Super Bowl history gives him all the superdelegate votes. It's kind of a pity that Shaq Mason's five seasons and two rings lose out to Logan Mankins fewer seasons (during the decade) and zero rings. But when you come in behind the league's All Decade guard and the second best in franchise history, it's not exactly "Saving Private Ryan" losing Best Picture to "Shakespeare in Love."

But I'm really looking for faults in this list through an electron microscope. Looking at it through my usual progressive lenses, I'd say the 27-person panel of reporters, alumni and staff nailed it, right down to James White as the most worthy RB and Danny Amendola at flex. Taking a step back, it's funny how there are so many guys who dominated for 10 or so years and are the clear cut, obvious choicel, like Brady, Gronk, Devin McCourty, Matthew Slater and Stephen Gostkowski. Then you've got your All NFL guys like Mankins and Chandler Jones, which makes them automatic. Then you've got these positions that have such roster turnover that all your available choices are replacement parts, like DT next to Vince Wilfork. And if I was going to choose, I'd pick Lawrence Guy as well.

So sorry for the tepid, room temperature take. But I've got no argument with any of this. They say camel is a horse put together by a committee. But this committee put together Secretariat.