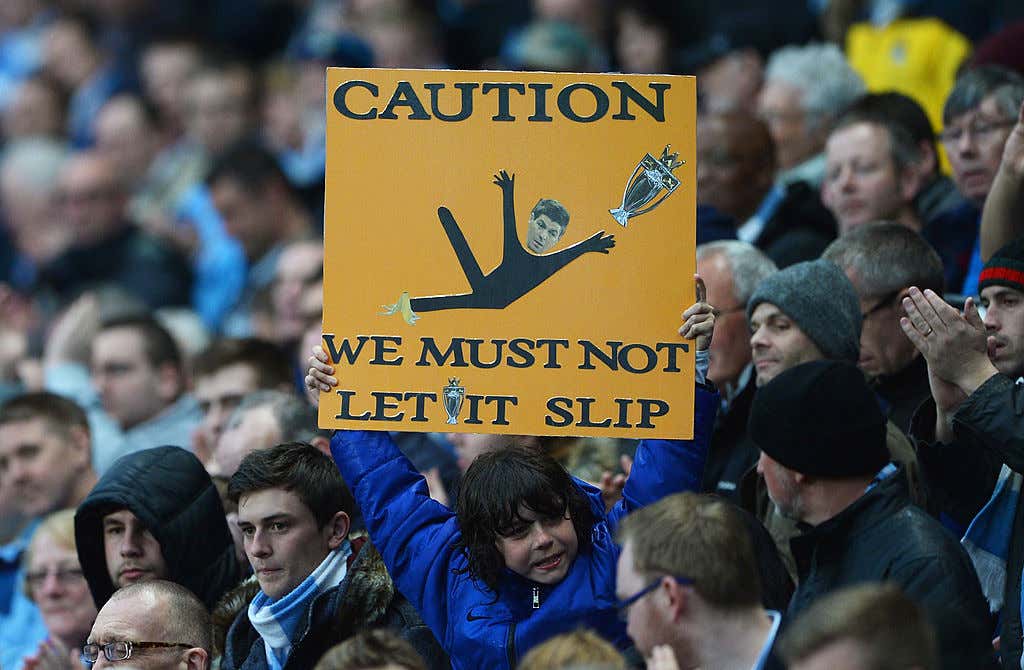 For those who don't know, Liverpool is the classic case of win enough titles early on and people will respect* you. They've won the league title in the top tier of English soccer 18 times but haven't won since 1989-90. In the time since then, they've won multiple European Cups, Domestic Cups, League Cups, and just about everything else besides the Premier League.

*hate your fucking guts because you only talk about the titles you won a million years ago. cc: Yankees fans who brag about 27 despite their parents not even being around for half of them

Liverpool and the Premier League title is a relationship that can only be compared to the likes of a one Wile E. Coyote and the Road Runner. Liverpool always thinks it's their year before it all goes terribly, terribly wrong, derailing all hopes of a title. So when Liverpool lead the league by 5 points with 3 games left to play in the 2013-14 campaign, Liverpool fans were drooling out of their dumb scouse mouths.

Now you may think: "Wow Ethan! There's no way they could let this 5 point lead slip in such a short amount of time!"

Well let me tell ya, Steven Gerrard certainly thought there was no way they'd let it slip.

This was their moment. Their time in the sun. A moment where the world would look at Liverpool and NOT think of disappointment. That is, of course, until the second-place Chelsea boys came storming into Anfield needing a win to keep their title hopes alive. If Liverpool wins this game, they've all but won the Prem.

Stevie G. Club legend, club captain, been a part of LFC since he was nine years old….. and he slipped.

Who would've ever thought? The man who was so vital, so important to Liverpool, would go and bottle a long-awaited Premier League trophy like that. He literally promised that their lead at the top of the table would not slip, yet here we are, watching him slip and give Chelsea 1-0 lead. Chelsea would go onto win 2-0 and close the gap to 2 points at the top of the table. Man City (3rd place) now trailed Liverpool by three points with a game in hand.

The craziest part is, that wasn't even the final nail in the coffin for Liverpool! They still had a chance to win the EPL. That is, of course, until they blew a 3-0 lead at Selhurst Park, drawing 3-3 to an 11th place Palace. That was the final nail in the coffin as City would win out, completing one of the all-time Premier League choke jobs. It's just one of those things you absolutely hate to see.

That's the only thing I think of when I think of Steve Gerrard now, not anything productive he actually did. I remember watching the slip game in real-time and just being shocked. It's one of those sports moments where that's the only emotion you have. I was ecstatic Chelsea scored, keeping their title hopes alive but at the same time, the human side of me couldn't help but feel for Gerrard. Still an all-time Premier League moment though. Classic Chels coming up in a big game though.

PS - while the whole coronavirus thing is terrible, it would be bang-on Liverpool to find a way to bottle the league after running away with it and only needing two more wins for this year's Premier League title. Bang-on Liverpool indeed.