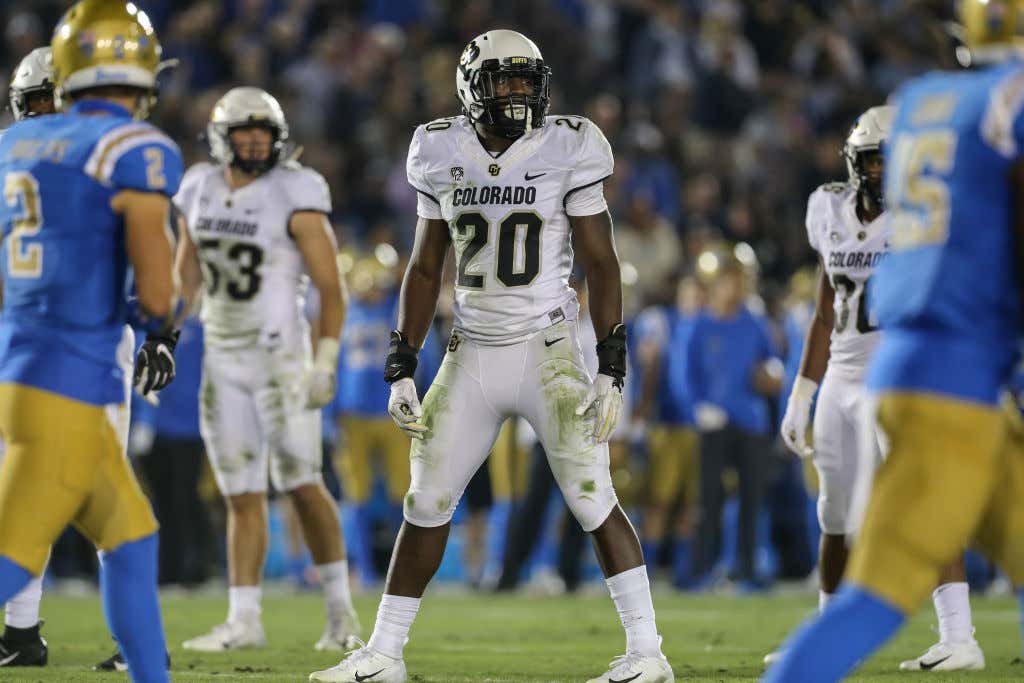 Every now and then you hear about a guy getting drafted who didn't start until their senior year of high school or something like that. Joel Embiid didn't start playing basketball until he was 15. Michael Jordan was cut by his varsity team as a sophomore. Well, how about Colorado's Davion Taylor? This dude played ONE AND A HALF GAMES DURING HIS HIGH SCHOOL CAREER!!!!

Taylor had an unusual path to Pac-12 football. Growing up in Magnolia, Mississippi, he played football throughout high school but was not allowed to play in games on Friday or Saturday night as his family observed the Seventh-day Adventist Sabbath. Taylor was also a state champion sprinter and triple jumper, though he missed the state meet his junior year because it was on a Saturday.

Because of religion he couldn't play in any games Friday or Saturday night, so he only got into two games total and practiced the rest of the time. Imagine how frustrating that's got to be for him, the coach and the team. Dude has 3rd round NFL draft potential but he's got to get home before sundown on the days you play games. During his first game, his coach had to call the mom and beg her to let him finish the game because he was playing so well! She let him finish that game and play one half of the next one, but that was it. Mama didn't want him breaking the Sabbath after that.

“So, the deal was until halftime,” Taylor told the Associated Press on Monday. “But then my coach called my mom and said, ‘He’s playing real good. He could earn a scholarship if he keeps on playing.’ So she let me play that full game, and then the second game I just played until halftime and she said, ‘I don’t want him breaking the Sabbath no more.’” -Fox News

Religion is absolutely crazy, man. Dude was also a state champion sprinter but missed the state meet his junior year because it was on a Saturday. Imagine all the other runners faces realizing Davion wasn't showing up that day? Absolute miracle.

Finally when he turned 18 a light bulb went off in his head that being a professional football player would be a good idea. Some people will tell you that football is its own religion. Either way you slice it, you have to get rid of that religion, go to the religion store, and pick another one. His mom allowed him to make his own choices when he turned 18 and that choice was a no brainer: football. No offense mom, but your son was meant to hit people on a football field.

When Davion turned 18, he received his mother's blessings to change his observance to play college football. He nearly didn't make the team at Coahoma Community College but wound up becoming a starter during his freshman year. Taylor was rated a four-star junior college recruit after his second year at Coahoma, and Colorado snatched him up.

Problem was when it came to picking a college, no school would consider him because there was no tape of him. Dude almost didn't make the JUCO team he tried out for! Flash forward to last night and he gets taken by the Eagles in the third round. One of the more remarkable stories I've ever heard. Based off this, he'll be an all-pro before we know it.