ABC7 Chicago- Despite being an octogenarian, when D'Amico died on Wednesday night, multiple sources have told the ABC 7 I-Team that he was still assigned to one of the highest-ranking posts in the Outfit: consigliere. That title, adviser to the mob, has been held by some of the Chicago Outfit's biggest names over the decades, including Anthony "Joe Batters" Accardo who rose from Al Capone's driver to run the entire shebang.

When D'Amico died, mobologists considered him to be the No. 3-ranking man in an illicit organization that had been decimated by other deaths, prosecutions and lifetime prison sentences. D'Amico's biggest clout, then-reigning boss John "No Nose" DiFronzo, died two years ago. DiFronzo and D'Amico cut their teeth on the same West Side Outfit crew and were considered yin and yang crooks. In one infamous gangland meeting, the I-Team followed D'Amico to "Lunch with No Nose" in a suburban eatery in 2009. The bosses had all gathered that March day to discuss business and pleasures, unaware that they were being surveilled by an ABC 7 Chicago news crew.

Gonna venture to guess everybody's favorite mob blogger, and the glue that holds Barstool Chicago together, Eddie, laid off this one because the D'Amico's are his neighbors in Elmwood Park. So I'll take the wheel.

Marco "The Mover" D'Amico was the man for nearly 60 years in Chicago. 60 years is quite a career. Doesn't matter if you're parking cars for a living or overseeing the second biggest organized crime ring in the United States.

"The Mover" made his bones back in the 60s running underground casino's, numbers games, and a book in Elmwood Park. He was also implicated in a series of several robberies. He ran illegal gambling operations everywhere from Rockford, IL to Lake Geneva, WI.

His nickname, "the Mover," was an apparent reference to his well-honed skills at getting things done, whether those "things" involved collecting on juice loans or convincing Outfit-connected business owners that it would be in their best interest to pay the mob's so-called "street tax," a fee for permission to operate.

In 1992 "The Mover" was suspected but never charged in a car bombing of mob-traitor Lenny Patrick's daughter.

During the 1980s and the first part of the 1990s, D’Amico’s top enforcers were the “Spitfire brothers,” Richard (Richie the Spitfire) Spizzirri and John (Johnny the Spitfire) Spizzirri. Both Spizzirris were jailed for collecting debts on D’Amico’s behalf in 1992. Richie Spizzirri was sent back to prison later in the decade thanks to an extortion collar. Johnny Spizzirri once co-owned a trucking company with slain Chicago mob hit man Anthony "Tony the Hatchet" Chiaramonti, killed for his rogue behavior in November 2001.

Marco The Mover managed to elude the feds for almost 40 years before finally being nabbed in 1994.

He was taken down when the FBI used a disgraced attorney, Robert Cooley, to cooperate and wear a wire to implicate the D'Amico. Cooley, who had represented the Mafia's brass in Chicago for years, claimed one day he had an epiphany and wanted to "do the right thing." So he went to the feds and offered to take the men he kept out of jail. He agreed to wear a wire and get his clients to snitch on themselves. They thought they were speaking to an attorney under client privilege in many cases but in actuality were giving the FBI, via Cooley, the playbook to their entire operation. D'Amico included. Pretty fucked up.

He was charged and pled guilty to all charges in '94 and did 10 years in prison. He got out just in time for the infamous "Family Secrets" bomb to drop in 2005. It rocked the Chicago mafia underworld by implicating most of the major players including Joey "The Clown" Lombardo, (whose death Eddie blogged a few months ago) who went into hiding to avoid arrest.

(If you're unfamiliar with Operation Family Secrets it's a good read because of how equally fucked up it was. Not to defend criminal enterprise but the FBI used the son of mob boss Frank "The Breeze" Calabrese, Frank Jr., to rat on his father. He was doing time along with his dad and was pissed off that he had "been rough on him growing up". I guess blowing through hundreds of thousands of dollars on a coke habit will do that to a man. So Frank Jr. went to the FBI and offered information and agreed to wear a wire on his father. While he was at it he convinced his younger brother Nick to join in and rat on their dad. Hence, "Operation Family Secrets".)

Marco "The Mover", fresh out of jail in 2005, and a spring 69 years young, assumed Lombardo's role as #3 in command of "The Outfit". D'Amico served under fellow Elmwood Parker, John "No Nose" DiFronzo. (What a nickname).

Fun Fact - Johnny "No Nose" got his nickname from jumping through a window during a Michigan Avenue store heist and slicing off part of his nose. After some work, he tried to go by Johnny "Bananas".

By day DiFronzo worked as a car salesman at an Irving Park dealership and often by 4:00 he could be seen entering an Elmwood Park restaurant for his afternoon vodka.

DiFronzo’s name surfaced in the Operation Family Secrets trial in which mob heavy weights Joey “the Clown” Lombardo, Frank Calabrese, Sr. and James Marcello were convicted of taking part in a series of mob hits, including the murders of Tony and Michael Spilotro.

During the trial, federal prosecutors named DiFronzo as part of the crew that killed “Tony the Ant” and his brother and buried them in an Indiana farm field. When asked during the course of the trial how prosecutors could name—and not charge—DiFronzo, Assistant U.S. Attorney Mitchell Mars’ only response was “good question.”

It was common knowledge to most of the West Side that these guys held their meetups every Friday at noon at "The Loon Cafe" in River Grove. In 2005 ABC Chicago's I-Team documented one of the meetings in a feature they called "Lunch With No Nose". (Chuck Goudie has the biggest brass balls).

D'Amico had a pair of brass balls himself. He was well known for enjoying throwing fists and his short temper.

The hoodlum's sharp eyesight was evident during one legendary encounter he had with police in 1983. D'Amico's car had been curbed in northwest suburban Palatine on suspicion of driving under the influence. According to authorities, the drunk D'Amico asked "do you know who I am?" When the officer answered that he didn't know, or care, D'Amico proceeded to bite off one of the patrolman's fingers. Despite the gory outcome of the traffic stop, in typical Outfit fashion, no jail time would be served.

D'Amico also loved the nightlife scene and could be found hanging out on Rush St. spots Jilly's and Tavern on Rush regularly.

Towards the end of his reign it's alleged he oversaw the Chicago mobs racketeering and gambling operations.

According to Gangster Report, he left Rudy "The Chin" Fratto (also of Elmwood Park) as his successor under Albert "Albie the Falcon" Vena.

In case you haven't noticed there have been some absolutely lights out nicknames rattled off in this blog.

Was interested to see where "No Nose", "The Clown", "The Chin", "Joey Batters", and "Tony The Hatchet" stacked up against the all-time greats so did some digging. Here's what I got for the leaderboard. 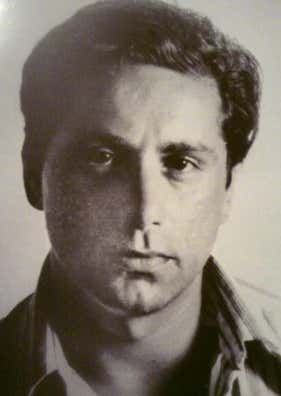 All Gas Pipe. No Breaks

10- Anthony "Gas Pipe" Casso - Anthony had a sick fetish for killing his victims with a gas pipe. What? 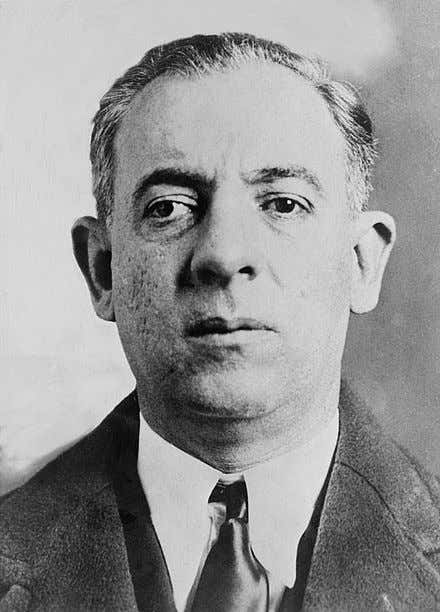 Not Gonna Say It

9- Ciro "The Artichoke King" Terranova - Terranova earned this nickname because of the massive profits he made from purchasing and reselling artichokes. (PS- artichokes are fucking delicious) 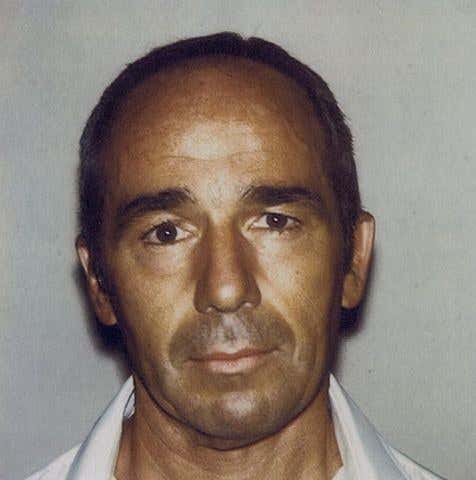 8- Luigi "Baby Shacks" Manochhio - This name is well known by my Providence people. Head of the Patriarca family, he got his nickname for "Shacking Up" with so many women. 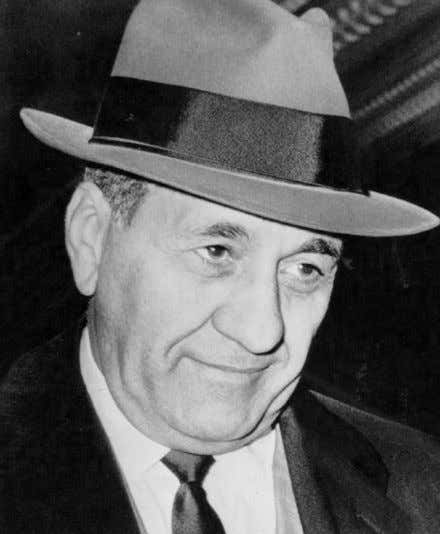 7- Anthony "Big Tuna/Joe Batters" Accardo - "During Prohibition, he received his first nickname "Joe Batters." Accardo used a baseball bat to murder three mobsters who betrayed the Outfit. Al Capone allegedly said, "Boy, this kid's a real Joe Batters." The second nickname "Big Tuna" was instituted by Chicago newspapers when Accardo was famously photographed with a giant tuna he caught during a fishing expedition." 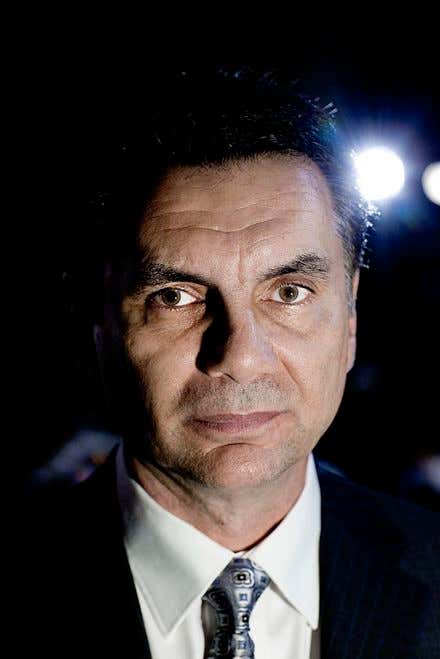 6- Michael "The Yuppie Don" Franzese - Got his nickname because of his love and knack for white collar crime. Specialized in stock market fraud and Ponzi schemes. 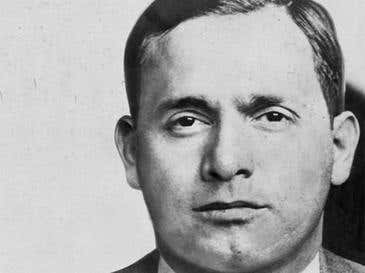 5 - Tommy "Thee Fingers Brown" Lucchese - This ones for my Cubs kinfolk. Tommy was born with a deformed hand. He got his nickname from a cop that booked him on grand theft auto who was comparing his hand to famous baseball Cub's pitcher Mordecai “Three Fingers” Brown. Lucchese hated the nickname but the rest of the world didn't so it stuck. 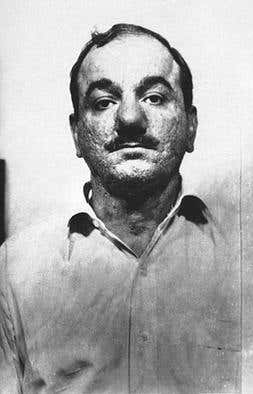 4- Phillip "The Chicken Man" Testa - Not to be confused with Wade Boggs who was also known as "The Chicken Man" (given to him by Jim Rice because he ate chicken before every game. Every. Single. Game. His entire career.) Testa got his nickname because he was in the poultry businesses for years.

Not So Fun fact - Testa was blown up by a nail bomb that was planted under his porch in 1981. Tough. Bruce Springsteen references it in his song "Atlantic City" from the Nebraska album; "Well they blew up the Chicken Man in Philly last night, And they blew up his house too." 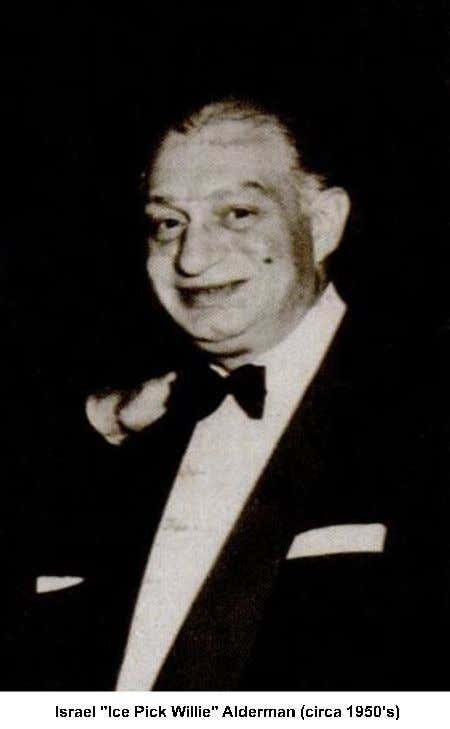 3- Isreal "Ice Pick" Alderman - Got his nickname for his love of using an ice pick to puncture his victim's brain through their ear. 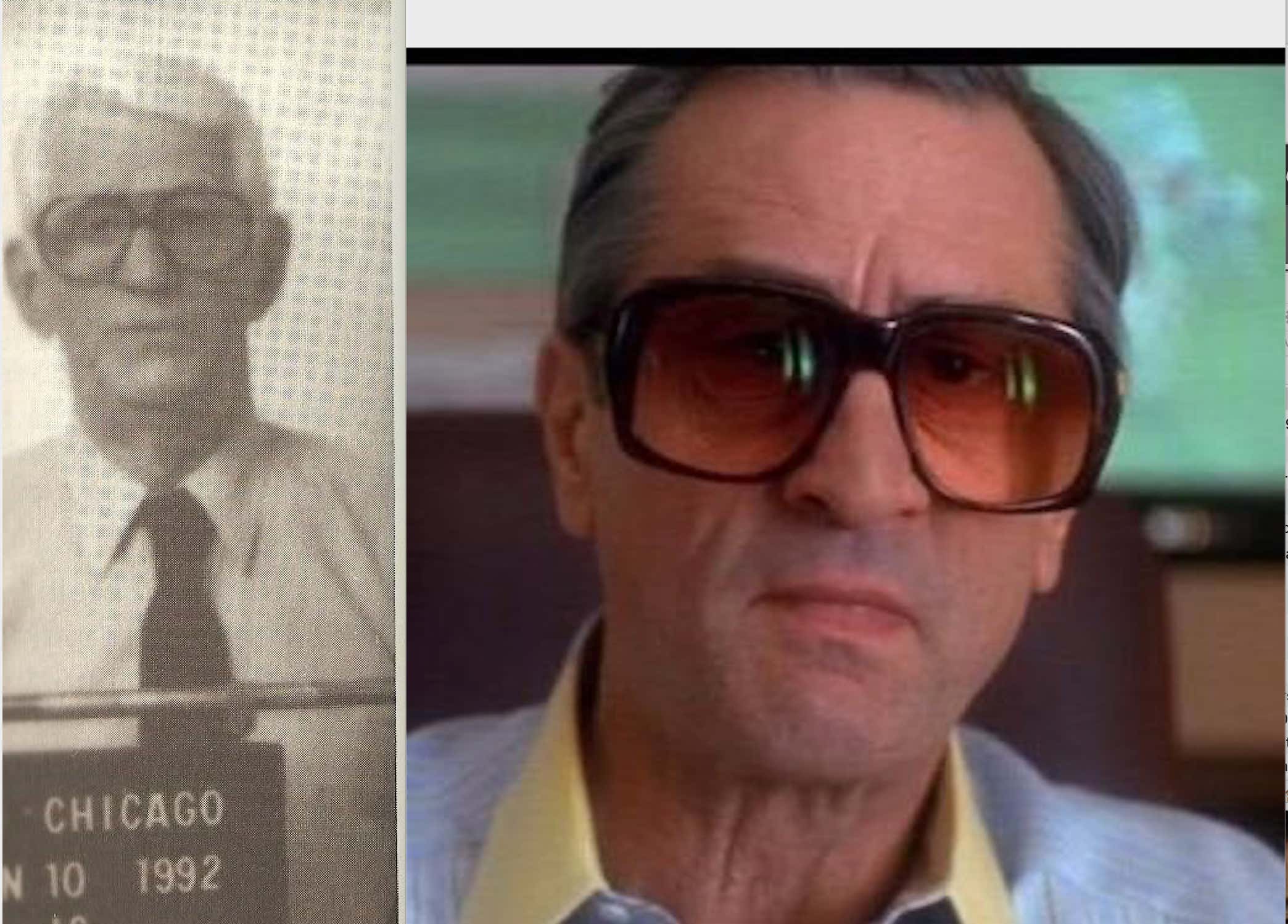 Somehow Angelini Was Not The Inspiration For Ace Rothstein

2- Donald "The Wizard of Odds" Angelini - This one is all time. Given to Angelini because of what a sharp he was.

Can we get Welker to slap this one on a t-shirt with Big Cat's mug on it so I can collect my $50 gift card? 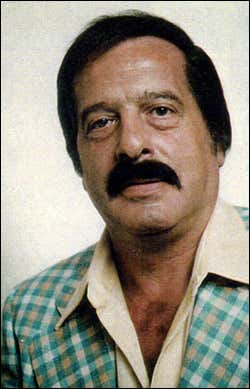 1- Greg "The Grim Reaper" Scarpa - This name fucks. If I was a hard-hitting linebacker, or slam-the-door pitcher, this is the nickname I'd pay teammates to float for me.

Scarpa was part of the Columbo family in the '90s. "The Grim Reaper" Scarpa also only had one eye. So you know he had to have done some dark shit for his nickname to be grim reaper and not one-eye or pirate or something like that.

Kevin "Two Weeks" Weeks - Surprisingly his nickname had nothing to do with his last name. Everybody in Boston knows the name Kevin Weeks because he was a high ranking member of Whitey Bulger's Winter Hill Gang. He got the nickname because he was only in jail for two weeks before he also turned FBI informant.

Abe “The Canary Who Could Sing But Couldn’t Fly” Reles - Just a preposterous nickname. As disrespectful as it gets. Reyes was apart of the infamous Murder Inc. (Not Ja Rule and Irv Gotti's, but the real one in the 1940's that was made up of Italian and Jewish-American hitmen from Brooklyn). He got nabbed on a murder charge and turned government witness, aka "a canary". He sent 7 of his former associates to death row. For that feat he was thrown from his witness protection hotel balcony and labeled "The Canary Who Could Sing But Could Not Fly". 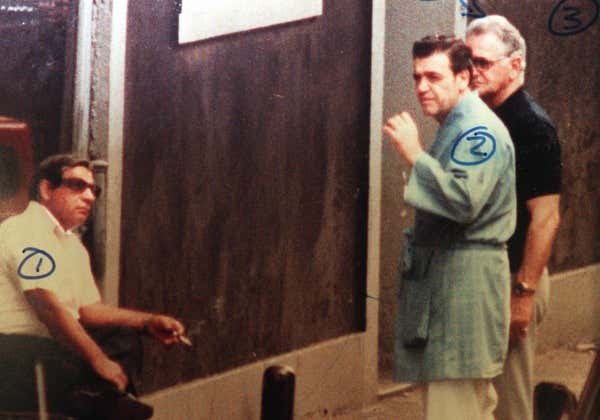 Vincent "The Oddfather" Gigante - "Gigante was also known as “The Chin”, but law enforcement and the press gave him “The Oddfather” moniker. He earned this nickname by wandering aimlessly up and down the streets of Greenwich Village. He would be in a bathrobe looking disheveled and often being led by the arm of a caretaker guiding him."

Because Fuck This Guy

Richard "The Ice Man" Kuklinski - Judges docked this guy because of what a sick bastard he was. He is responsible for personally killing over 200 people. That kind of evil also earned him nicknames "The Devil Himself" and "The One-Man-Army".