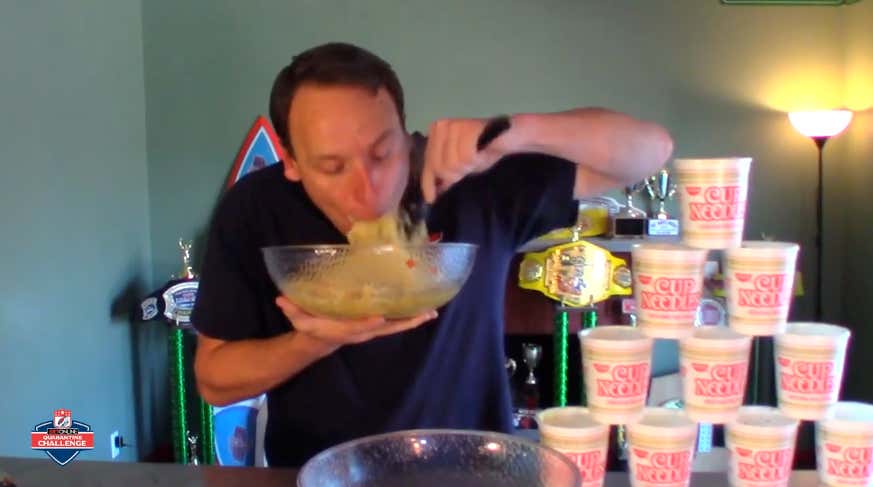 The man is a legend. He is an icon. He is the greatest we have ever seen. If you combined the dominance of Michael Jordan, Wayne Gretzky, Michael Phelps and Usain Bolt, they still wouldn't even come close to what we just witnessed out of Joey Chestnut in the MLE Quarantine Challenge Finals.

I mentioned in last night's blog after the baked beans semifinals that Chestnut didn't look like his regular self during the qualifying and quarterfinal rounds. But this is the mark of a true veteran of the game. Joey Jaws knows that he has what it takes to make it to the money rounds and he realizes that he doesn't need to waste all of his energy in the qualifiers. So he coasted through the first two rounds, turned it on a little with the 10lbs of baked beans last night, and then tonight in the finals? Well tonight he had to take down 10 cups of ramen. Now I'm sure that some of you may have come close to crushing 10 cups of ramen in the midst of a drunken bender one night but Joey Chestnut just put back these bad boys faster than it takes to microwave just one cup of noodles.

Right off the bat you knew that we were about to witness something special out of Jaws. I mean just look at those massive bites. He was inhaling this ramen right from the jump. Like a vacuum right there. Gideon Oji is a massive human being but even he couldn't even fathom bites that aggressive.

Then we got the patented savvy gamesmanship out of Chestnut here as he transfers the little remaining bits of bowl #1 into bowl #2 to save him on time. That's the mark of a man who has been here before and has a game plan that he won't let the pressure of the situation dictate. But in the end, he didn't need to worry about saving those precious extra seconds because he absolutely DUSTED Oji from there.

It wasn't even a competition at that point. Gideon Oji had been putting on a masterclass in the first 3 rounds leading up to tonight. But in the finals, that's where you separate the gods from the men. And Joey Jaws wrote the bible. A final time of 1:49 with a 1-second penalty to give him an official 1:50 new World Record for ramen. What an absolute legend. The greatest of all time. We are all witness to history, and I just hope you thank whichever higher being you believe in that you were put on this Earth at the same time as this beast.