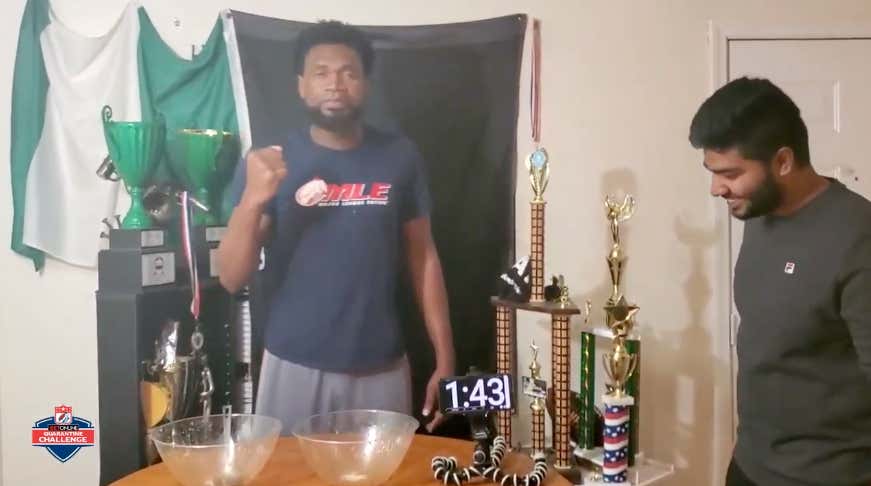 Gideon Oji, ladies and gentlemen. Get used to hearing that name because we have a star in the making. This man has been putting on an eating performance of the likes of which we've never seen before. Oh and just for a little bit of context here, we're talking about Major League Eating's Quarantine Challenge Tournament that's going on right now. But I'm sure you already knew that because it's the only professional sport still going right now.

It all started off on Friday night when Oji crushed 2lbs of bologna in just 52 seconds to take the top spot out of the qualifier round. Nobody else even came close to touching him on that score. He could have tossed back another half pound and would have came away with the 1 seed. Then on Sunday night the eaters had to put back 48 Oreos and half a gallon of milk. Oji didn't have the best time in that round but still had a top 3 finish to easily send him into the semifinals.

So tonight in the semifinals the eaters had to face 10lbs of baked beans. TEN. POUNDS. OF. BAKED. BEANS. Most of you probably haven't eaten 10lbs of baked beans in your life. But Gideon Oji? He's not like you or I. This man is a machine. And those beans didn't stand a goddamn chance.

Just look at this beast go. I mean look at that hand adjustment there. That is next level eating. He realized he was going to run out of gas holding the bowl by the side like that so we switches it up and goes with the underhand carry. It may have taken a half second off his time at first, but in the long run you could tell it made all the difference because he sprinted through that finish line.

Legend. He ended up getting hit with a 2-second penalty but it didn't matter. You could have added 15 seconds to his time and he still would have been fine.

So now with another win tonight, Oji is on to the finals tomorrow night where he'll be going up against Joey Chestnut and 10 individual cups of Ramen.

Joey Chestnut hasn't had the most dominant tournament so far and at no point during this quarantine challenge did he look like the eater we've been used to seeing. But tonight he proved why he's one of the best in the world. Like Oji's hand adjustment, having the gamesmanship and sense of the moment to transfer the last few remaining bites of his first bowl into the finisher bowl is what separates him from the rest. It's that mental edge he has over everybody to go along with his jaws of god.

And at the end of this match, Joey could have read a full Harry Potter book before finishing up those beans with how much separation he had from Darron Breeden.

An easy win for Gideon Oji. An easy win for Joey Chestnut. And an instant classic in the making for tomorrow night's final round. See you all in 24 hours.