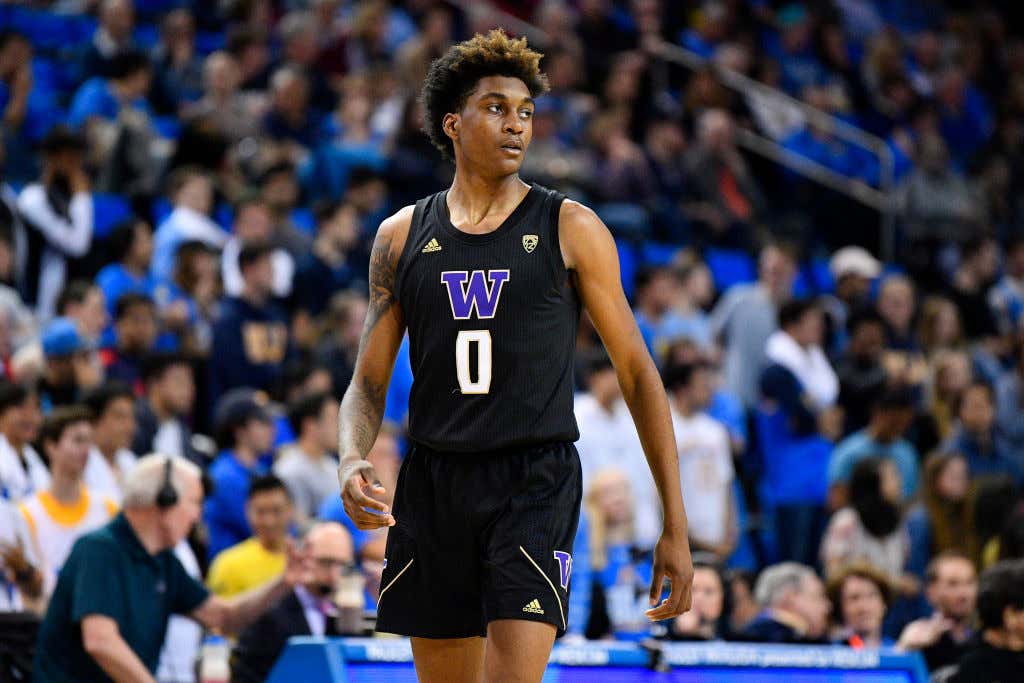 Alright we're back in our continuing effort to find the next Celtic through YouTube highlights. I'll tell you this much, of all the names that have been given for me to look at during this exercise, this dude was pretty intriguing. Before we dive in I want to remind you that you can catch up on the previous 8 prospects we've done here. I figured this was an easier way to share it than listing every name because that's going to get annoying for me to do. Just click that link.

So who are we looking at today?

Maybe you're like me and have no idea who this is. That's the beauty of this exercise, we're relying on people who actually watch college basketball to give me a name and this Jaden fella came up a few times. You'll soon see why so let's start with the stats

Rumor has it this dude has a 7ft wingspan. I had to Google that just to make sure and the official length is 6'11.5 so pretty much 7 ft. You know who also had that wingspan? Romeo Langford. You know which team just drafted him? Exactly. Now, does Jaden pass the mock test? Well from what I've seen he's slated to go 16-18 so he sure as shit does seeing as how the Celts first pick is #17. Obviously the first thing that stands out watching those highlights is his size. I can't lie, there's something intriguing about a 6'10 guard/forward who has good length that I wouldn't hate adding to that team. He's obviously not a Durant or Brandon Ingram type player from a skillset perspective, not even close, but what about a Jonathan Isaac? Remember how raw he was when he first got into the league? Now he's one of the best defenders in the NBA with an improving offensive game. Why couldn't that be the case here?

I'll admit, the handle was much better than I expected when I saw this dude was nearly 7ft. He also has a pretty quick release which is always a nice foundation to build on even if his shooting does need work. But there are signs for optimism there since he shot 76% from the FT line. As they say, that's a much more proven way to project someone as a shooter at the NBA level. I do also like how he seems comfortable both coming off screens into his jumper, and a little midrange game off the dribble. Those are two things you basically have to be able to do at the next level and given how the Celts play there's always that spot right in the 10-15ft range for players to attack and pull up from. He seems comfortable in transition and handling the ball which I like, and it makes me dream about what that second unit might one day look like. They don't really have that 6'10 athletic wing freak at the moment.

On the downside, every shot highlight I watched was basically contested. Doesn't exactly give me a ton of confidence he can create any sort of space offensively on the next level, but that's what you should expect with an offensive project I guess.

If we're being honest, he does fit the Danny Ainge mold. Right away he's clearly a project, but the potential and room to grow is off the charts, especially offensively. There's nothing Ainge loves more than taking an athletic wing who might be rough offensively but can hold his own defensively and developing him. Remember, this kid is 19 years old and would most certainly be a project at least in the short term. But that's also the beauty of this roster, they can afford to take on a project at that spot given the bodies already on their roster. Think Romeo. They have the luxury of not needing immediate production from their first round picks. Maybe this is the perfect spot to take a flier on a guy who could turn out to be one of the biggest sleepers of the draft. When you look at it that way, McDaniels becomes a lot more exciting to me.

Conclusion: IN Jaden McDaniels. He may not be perfect, he may have his flaws, but I'm drunk off the potential. Sue me. Get him into this system, get him into an NBA weight training program, and this is the exact type of prospect I want Ainge to take a flier on.