Happy birthday to the Head Ball Coach! One of the greatest to ever do it. I've always wished we had Spurrier peaking in the modern era. He would've been god's gift to Twitter. He still gave us some awesome quotes throughout the years, so let's relive them to celebrate HBC's 75th.

Spurrier has had a great history with trolling FSU. One of the greatest quotes of his life came after FSU’s Foot Locker scandal. In 1993, FSU players “bought out” a Tallahassee Foot Locker. A defensive back for the Noles said, “Big boxes. We were fitting about 12 winter coats in one box. We just bought out Foot Locker. Period.” When asked about it, Spurrier said, “You know what FSU stands for, don’t you? Free Shoes University.”

Recruiting In Alabama While At Florida:

“In 12 years at Florida, I don’t think we ever signed a kid from the state of Alabama. Of course, we found out later that the scholarships they were giving out at Alabama were worth a whole lot more than ours.”

“He’s like a New Testament person. He gets slapped upside the face and turns the other cheek and says, ‘Lord, forgive them, for they know not what they’re doing.’ I’m probably more of an Old Testament guy. You spear our guy in the earhole, we think we’re supposed to spear you in the earhole. That’s kind of where we’re a little different.”

“I sort of always liked playing them that second game because you could always count on them having two or three key players suspended.”

On The Fire At An Auburn Football Dorm That Burned 20 Books:

“The real tragedy was that 15 hadn’t been colored yet.”

“You can’t spell Citrus without U-T.”

"I know why Peyton came back for his senior year. He wanted to be a three-time star of the Citrus Bowl."

“Will be the 14th time I’ve coached in Neyland Stadium. I’ve coached there more than some of their head coaches.”

“So you get two good hours on the field about every day, you get about an hour and a half in the meeting room and that’s pretty much all you need to thoroughly coach your team.”

P.s. This fit from Spurrier was phenomenal. Would slay at any Florida frat party: 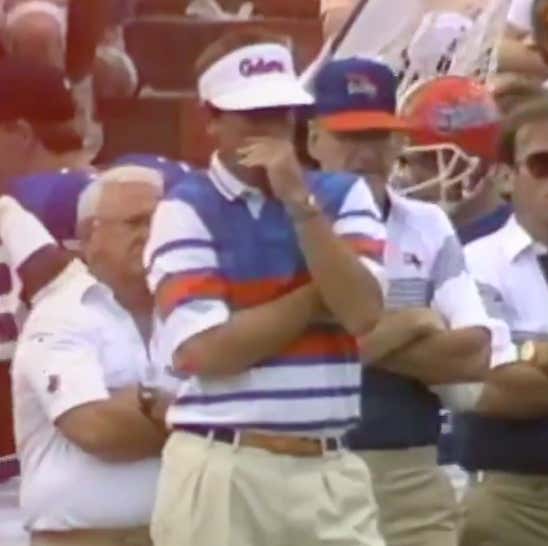