Obviously a very sad day in the baseball world as we learned about the passing of Yankees co-owner Hank Steinbrenner. Everyone has chimed in with their own little sentiments and then there's Jon Heyman going full Rovell like a buffoon.

Here's what Heyman's Twitter plan of attack usually is: regurgitate the same report 18 different times with no added info, get the all clear from Scott Boras that a "mystery team" is involved in a potential trade to fuck with other teams, and then award credit to the first report of the deal or signing 4 hours later. Well, now he's doing it with death tweets?

I mean this is weird. No one was fighting over being first to the death tweet so they could get credit. I called him out for being weird and he offered this response. 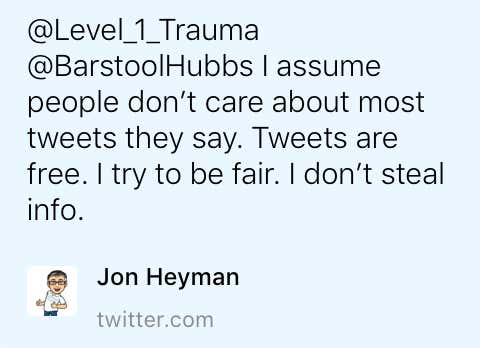 What in the world happened to Heyman? Did Darren Rovell hijack his Twitter? That second tweet is now deleted. I don't think Joel Sherman is out there wondering if he's going to get credit for being first to the Hank Steinbrenner death news dude. This isn't Gerrit Cole signing with the Yankees. A man died. Even his original tweet about the death was weird. Fucking Jon.

I don't know maybe I'm off base here, but I thought this was all bizarre.