When you're the billionaire owner of a highly successful professional sports franchise and another billionaire owner of an even more successful pro sports franchise in the same market commits a major act of goodwill and charity in a time of crisis, there are different ways to react. You could take it as a challenge. You could try to do even more and encourage other insanely wealthy team owners to do likewise. Turn it into a challenge to prove which of you is swinging the biggest good deeds dong in the city, which would be a competition in which everybody wins.

Or, if you're one of those billionaires who just got publicly shamed for laying off workers for the $2.7 billion soccer team you also own:

... and you just so happen to own the biggest newspaper in town the way John Henry does, you don't take up the challenge to give or any such thing. You take the path of least resistance. You use that newspaper to go on the attack and discredit what the other team did to help while you were handing out pink slips, raising prices and cutting payroll.

It was a rare moment of celebration in a season of misery: The New England Patriots team plane touching down at Logan Airport  April 2 with a massive cargo of scarce respirator masks for front-line health care workers who were trying to save lives.

But like so much else in this global pandemic, the ensuing reality has proven to be more complex.

How did Ned Stark put it? "Everything before the word 'but' is horseshit"? Let's continue:

As well-intended and carefully executed as the covert mission to China had been, at least some and possibly many of the roughly one-million protective masks on the team plane were not the time-tested, industry-standard N95 masks that medical workers wear when treating coronavirus patients. Rather, they were a Chinese version known as a KN95 mask that some hospitals in Boston and beyond have so far declined to use and remain reluctant about today. …

When KN95 respirator masks are made right, authenticated, and properly tested, they are considered to have most, if not all, of the protective qualities of the N95 masks. The federal Food and Drug Administration on April 3 issued an exception to its strict regulation of respirators, releasing a statement saying it “would not object” to their use “for the duration of the pandemic.” The Centers for Disease Control has also deemed the KN95 mask a suitable alternative when N95 supplies are low.

But while the masks appear to offer similar performance, they are not certified by the  National Institute for Occupational Safety and Health. Fears of counterfeit masks run rampant, and many doctors are concerned they would put  workers at risk.

To review: The FDA and CDC say that if the type of mask the Patriots provided for Massachusetts - and the Kraft family spent their own money to buy 300,000 of them for New York - aren't the very best ones manufactured, but they'll do. If they're the best you've got, use them. So the Globe immediately goes to the National Institute for Occupational Safety and Health so they can say they haven't gotten around to giving them their coveted seal of approval yet. Got it. There's your headline.

So how did this work? How many meetings have John Henry and Linda Pizzuti had over the week and a half since this happened:

… trying to craft a narrative that will turn this into a negative? In other words, a win for them. How many Globe editors had to pitch ideas until they came up with a plausible way to say the Patriots didn't really help anyone out and we'd all be better off if Jonathan Kraft and RKK had instead sat on their hands at One Patriots Place and done nothing?

And how long did it take before they called in this guy? 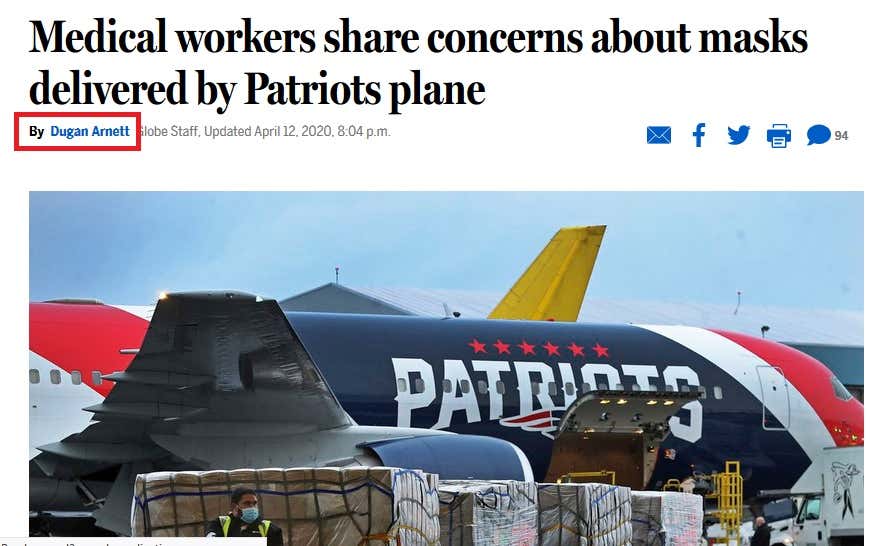 Dugan Arnett, the Globe's resident go-to guy for anti-Patriots hit pieces. The author of such classics as these: 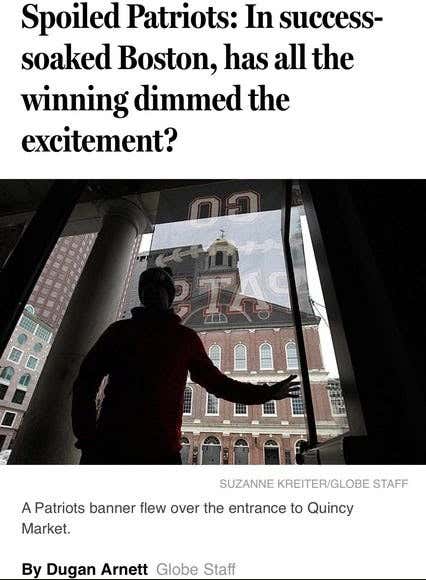 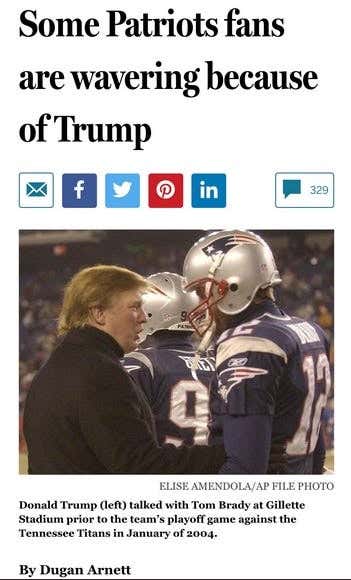 If I didn't know any better, I'd say John and Linda have a Dugan Arnett Signal on the roof of the strip mall where the Globe is published now, and they shine it into the clouds to call him any time they need someone to convince the few remaining 80-year-olds who still get home delivery that the Patriots are not popular and don't do things to help the public good. And once again, HatchetMan answered the call. Bear in mind that one about "success-soaked Boston" was published as 35,000 people showed up to Gillette Stadium for a Super Bowl send off rally and a week or so before 1.2 million fans came to the success-soaked parade on a Tuesday in February. But damned if he didn't do what Henry is paying him to do. It's a damned shame for those Liverpool FC employees they don't know how to carry out a jihad against the Pats, they'd have never missed a paycheck.

Anyway, good luck to the failing Boston Globe as they try to convince their dwindling readership that getting 1.7 million of the best masks available to the people in desperate need of them was somehow a bad thing. And also, best of luck with that Tom Brady tribute they're putting together.

It should be a huge hit with the hundreds of people ratioing the hell out of them on Twitter right now.