Listen anybody and everybody worth a shit knows that the steroid era was fucking awesome. So if you're here to debate that fact or just hate fun in general, this blog definitely isn't in your wheelhouse.

For everyone else with a functioning brain that doesn't specialize in ruining good times, here's a blog about the best Steroid Era batting stances.

We spend a lot of time these days talking about the flare hitters enjoy AFTER making contact. The "bat flip" as some call it has revolutionized the way we think about swag. But it wasn't always this way.

You see when nearly everyone across the league is juiced out of their skull, there's a significantly bigger risk you get a concussion or some broken ribs for admiring a home run. There's a lot more sensitivities at play and definitely an increase in willing participants THAT ARE JUST SO FUCKING ANGRY YOU KNOW.

In other words, you had to express yourself BEFORE contact. You looked sweet in the act, not in the celebration. Thus if you really had personality, it showed the second you got in the batter's box.

That's why you won't see a whole lot of bat flipping personas on this list. Most of these guys just assumed they were going deep because quite frankly they usually were. 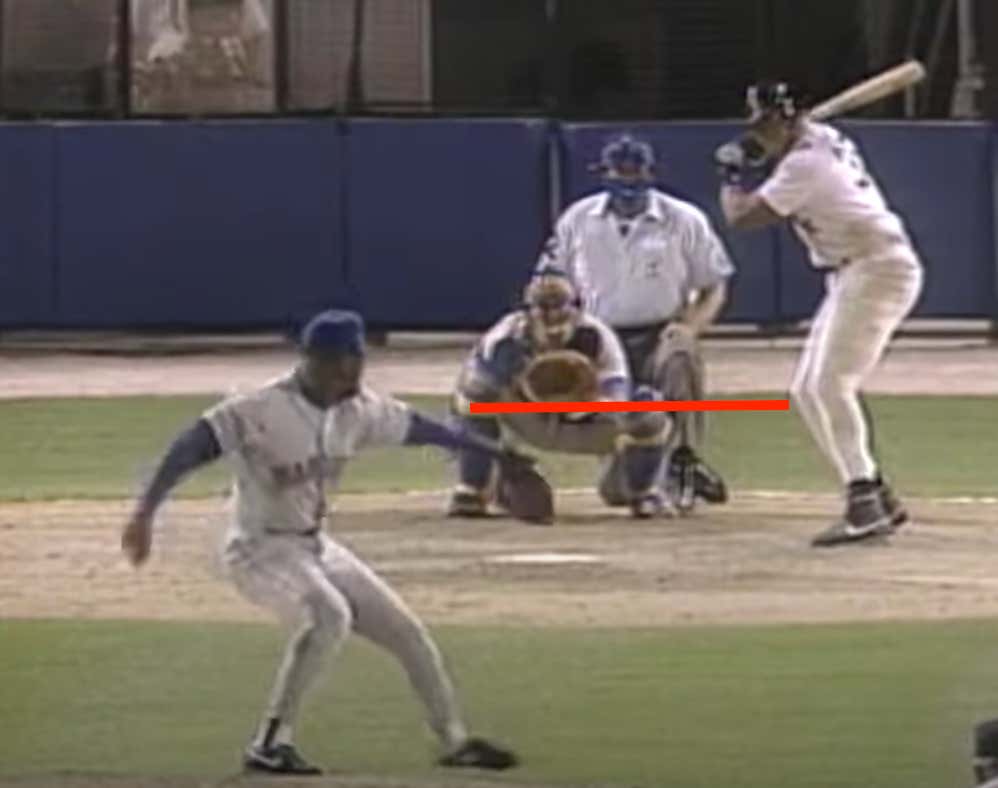 You know that scene in Rookie of the Year when Henry gets into the batters box and he stands all the way in the back corner because he's so scared? That was basically Frank Thomas's strategy except he did it to open up the outside part of the plate. Naturally, when you stand that far off, the pitcher thinks he can easily own the outer half. But as you'll see below, Frank Thomas literally covered the plate dugout to dugout. There's something about a 6'6 250 pound man standing straight up about 3 feet away from the plate that just screams mid 90's Thunder.

The ultimate reason Frank is here though is he has the biggest batting stance of all time. I've never seen a human being occupy this much space before in the centerfield camera-frame. It was gigantic, it was effortless, it was beautiful and as we've rediscovered lately here around Barstool Sports, it was one of the best right handed swings of all time. So of course it makes sense that Frank Thomas would also have a top-10 batting stance for his era. Imagine the dumps you'd take seeing this guy slowly stroll in the box. No thx.

PS - not saying Frank did steroids so spare me. Just saying I love the stance for his era.

You can't talk 90's batting stances without including this 16-inch softball hall of fame swing. I mean no joke there's scout stories out there that some early minor league coaches thought that Jay Buhner was napping in the box. Had him tested for narcolepsy and all that bullshit because you could hear him snoring from 2nd base. That's how peaceful Jay Buhner's batting stance was. They basically thought he was dead.

In reality, he was just waiting to drop his hands next to his dick so he could launch your next serving of meat into the right center upper deck. Yes, I'm talking oppo power and I'm talking Jay Buhner's goatee in Seattle around the same time Kurt Cobain was writing Billboard top 10's.

Bonus Points: Jay Buhner in Ken Griffey #1 on n64 has the most underrated sized hitting circle in the game and it's not even close.

You don't include Jay Buhner then pass on Edgar in the same breath. How stupid do you have to be to leave Russell Crowe off this list? Answer: very stupid.

The beauty of Edgar's batting stance is that it combines the ridiculousness of the 1990's with the bat cocked at midnight like a stiff dick. But it also has the cool vibes of the 90's because he's so goddamn relaxed like Buhner and Frank. Not a nervous fiber in the man's body and I'm sure that has nothing to do with the muscle relaxer PED smoothie but I digress. Point is Edgar Martinez exuded confidence from the moment he left the one deck circle. A real cocksman of a DH that would be higher on the list if his bat tilt wasn't immediately overshadowed by our next candidate.

People said Julio Franco fudged his birth certificate when he originally broke into the league with the Phillies in 1982 at age 23. He would go on to play the better part of 23 seasons spread through 2007 at age 48. You don't make it that long in this game without abusing industrial levels of synthetic testosterone while simultaneously employing flawless body mechanics. That's the ying and the yang of playing to your late 40's and needless to say Julio Franco had this shit figured out.

He basically dared you to throw him inside fastballs because No Way he can catch up to a good heater under his hands. WRONG. Julio Franco was so fucking geared up your only choice was to feed him soft stuff away. Like Cerrano in Major League except this guy existed in real life and he was awesome. Just look at that bat angle.

I would comment on this batting stance but I don't want Mo Vaughn to murder me for getting something wrong. Truly and sincerely one of the scariest athletes of my life and all I did was watch highlights from ESPN. Nothing but love for you Mo.

One of the most comprehensively Average players in MLB history with nearly 5,000 career plate appearances of a .750 OPS.  By all objective measures, Tony Batista is very forgettable.

And then you saw him get in the box:

When you think Steroid Era, you think absurd and obnoxious and unnatural, all of which are equally fair descriptions of Tony Batista's stance. He honestly looks like he's about to shoot a couple free throws before turning into my late grandma at our annual Memorial Day softball game, all hunched over trying to take away the inside corner. Classic Grandma and Classic Tony Batista, knowing their plate discipline all through the 1990's.

All you youngsters out there need to take a second and bend the knee because you're standing before greatness. Barry Bonds transcends what it means to be sweet when you get in the batters box. One of the most iconic setups of all time with the double waggle on a 31 inch bat that he's already choking up on. Then look at his feet. The front foot hardly moves before stepping into the pitch. If you wanted to look annoyed because you're so much better than everyone else, I'd give you Barry Bonds as the textbook example.

Even better is that his batting stance matured perfectly with his age and steroid usage. It was cool when he was the lanky outfielder that could steal 40 bags and hit 40 bombs. But it was also cool as he turned into one giant chest muscle with a two-toned maple-wood batt emerging from his tits. Mix in the body armor encasing his entire right arm and there's absolutely no reason to throw this man anything near the plate.

Elements of Barry Bonds in that he stands tall, extremely relaxed, extremely sweet. But there's almost no bat waggle and he's using the Frank Thomas move of standing 27 feet away from the plate. It's almost like Ken Griffey Jr. was sent back in time to show us how to be cool while playing baseball. It's like that one scene in the Matrix I can't describe.

Probably the coolest part of his swing is how little effort went into it. I remember being 12 years old and getting so upset because he wasn't even trying to hit it 500 feet while I couldn't even crack the top 6 in my house league order. But that didn't stop me or any of you from pretending we were The Kid. Usually it would last the first couple swings of batting practice until someone's dad would be like

What the fuck is that? Put your elbow up like I taught you. Just like Ted Williams.

Not trying to commit a federal crime here but same time I need to recognize the power crouch made famous in the 1990's. Jeff Bagwell is a living legend for a lot of reasons but most of us forget that it started with him trying to emulate Tony Gwynn. That's how his signature stance came to be, although he self-admittedly says he has no clue why it works. From a mechanical standpoint, I think anyone who knows baseball would agree. He steps back to the catcher, drops his hands, lunges hard on his front foot. But when there's contact, he barreled it up to the hall of fame. The fact it's so remarkably ugly is worth it's own miniseries when the MJ doc finishes. I got the title now:

Pile Driving My Way To Cooperstown: A Thruster's Journey

It's going to take a bit of an eye here but just follow me. Notice how Barry Bonds does his waggle, then pauses after waggle #2 to put the bat on his shoulder 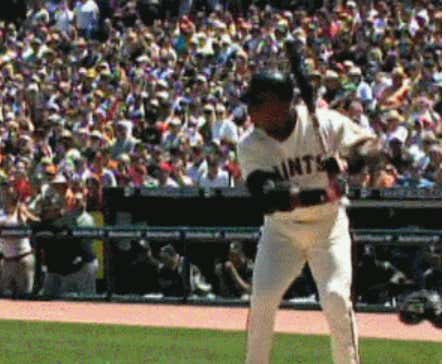 He's collected himself. He's done his double wag and now he's pulling it in.

Now compare that to Gary Sheffield, The Other famous bat wagging slugger from the steroid era:

This is another wags that just doesn't stop. With Bonds you see him gather himself and get collected to swing.

Fuck that. His bat waggle is unrestrained. The only thing it stops for is to send some garbage backup slider into the upper deck at a stadium of your choice. You have 509 to choose from, almost all of which come marinated in fresh stanozolol oils. Here's #400 for good measure.

Ultimately I go Sheffield #1 because I think it scores highest on the most different categories in my brain. It's sooooooo cocky. It's dripping in PED usage. His chain is constantly getting in the way. His leg kick belongs in a charity softball game but he used it for 22 major league seasons. Everything about Gary Sheffield's stance is extremely outrageous, but that didn't stop one of us from trying as kids.

Correct me if I'm wrong but I think it's a rite of passage to take a round of BP in the fast cages with the Gary Sheffield stance. You thought your timing would come around and maybe this would finally be your summer where you learned how to hit, all because you had the Gary Sheffield batting stance. But as you soon realized with your inevitable failures, doing the Gary Sheffield was fucking impossible. You hit .236.

Notable Omission PS - Kevin Youkilis had a ridiculous batting stance but he wasn't really in the heart of the steroid era and he also wasn't that cool of a player relative to these guys. Craig Counsell is a popular name for the era but unfortunately he manages the Brewers and can rot in hell for all I care. This is my list and Craig Counsell won't be on it. Neither is Moises Alou who got squeezed out at #11. His leading trait is that he pissed on his hands before games to hold the bat better and I'm not sure how to convey the appropriate recognition so he goes here. Who else did I miss from the STEROID ERA?