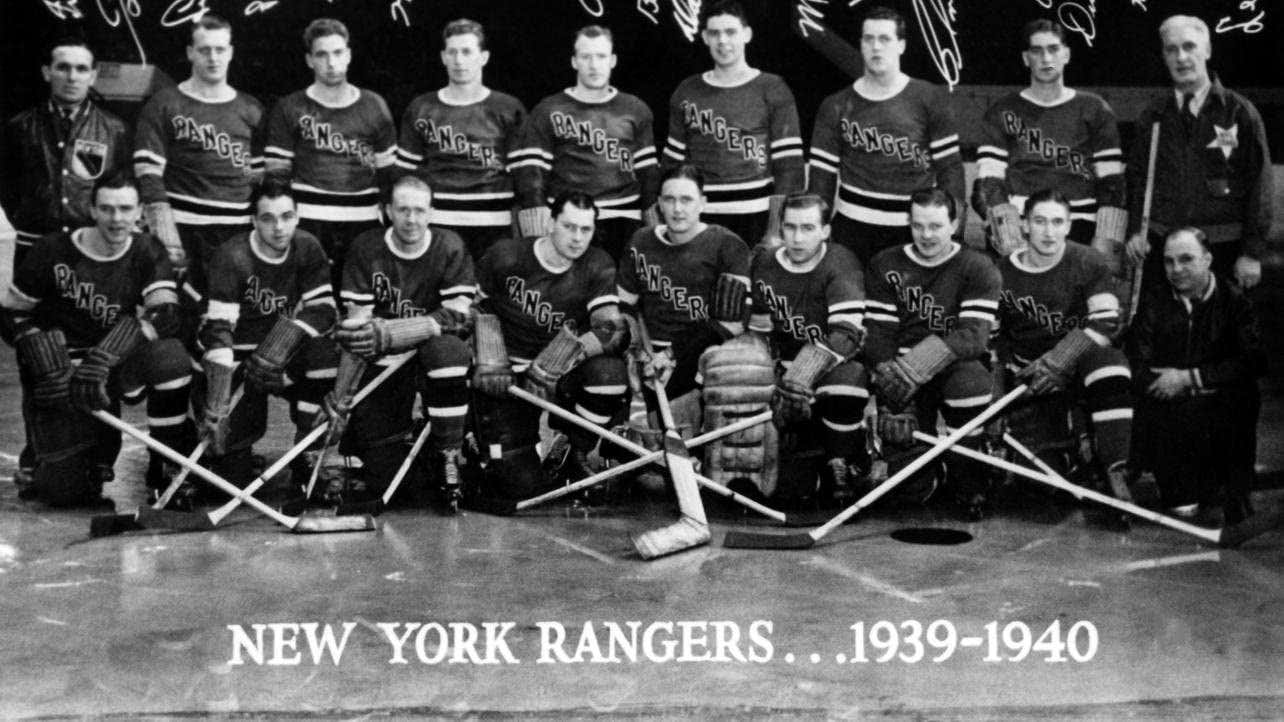 With an overtime goal by Bryan Hextall, the New York Rangers beat the Toronto Maple Leafs 3-2 in Game 6 of the Stanley Cup Finals to win hockey’s holy grail for the third time. The Rangers had to take the long road to the Stanley Cup as they were no longer able to use Madison Square Garden after the first two games due to circus.

The New York Rangers were one of the premier teams of the NHL before the war. Between 1928-1940, the Rangers played in the Stanley Cup Finals six times, winning three. This was as they battled the New York Americans for the loyalty of New York fans. The Rangers had an advantage in that they were in control of Madison Square Garden.

The 1939/40 season marked a new era for the Rangers as Lester Patrick stepped down as coach to concentrate on his duties as General Manager. With Frank Boucher behind the bench, the Rangers finished in second place with a record of 27-11-10.

The playoff format in 1940 had six of seven teams in the postseason, with the top two teams meeting in the semifinals, facing the Boston Bruins, who were both defending champions and regular-season champions with a record of 31-12-5. The Rangers opened the series with a 4-0 win, as Dave Kerr recorded the shutout at Madison Square Garden. The Bruins would win the next two games in Boston by scores of 4-2 and 4-3. Back in New York for Game 4, Kerr again blanked the Bruins 1-0. Kerr would also record a 1-0 win in Boston in Game 5 to give New York control of the series. The Rangers would clinch a trip to the Stanley Cup Finals with a 4-1 win at home in Game 6.

The New York Rangers had the better record but only had two games at home, as a contract with the circus made Madison Square Garden unavailable after April 3rd. Knowing this, the Rangers came out strong in the opener, beating Toronto 2-1 in overtime on a goal by Alf Pike, as Dave Kerr continued his stellar goaltending. In Game 2, Bryan Hextall netted a hat trick, as the Rangers won the following day 6-2. With the remainder of the series at Maple Leaf Gardens, the Maple Leafs rallied for a 2-1 win in Game 3, as Gordie Drillon and Hank Goldup scored in the third period. Turk Broda would blank the Rangers 3-0 in Game 4 to even the series at two games apiece.

With the series even after four games, Game 5 would be the fulcrum that would shift the series. The game would go deep into the night, as it was tied 1-1 in the second overtime, when Muzz Patrick scored for New York to give the Rangers a 2-1 win, putting them one game away from claiming the Stanley Cup. With goals by Syl Apps and Nick Metz, the Maple Leafs led 2-0 entering the third period of Game 6. Neil Colville and Alf Pike scored two minutes apart to tie the game, as overtime was needed once again. It would take just 2:07 for New York to wrap the series up as Bryan Hextall beat Broda to win the game 3-2.

After winning the Stanley Cup, the Rangers celebrated by burning the lease to Madison Square Garden in the cup. Now in full control of the building, they evicted the rival New York Americans. The Americans led by Red Dutton had planned to move to Brooklyn, but after the United States entered World War II, they were forced to suspend operations, reducing the NHL to six teams for the next quarter-century. It is said that Red Dutton cursed the Rangers, stating they would never win another Stanley Cup. The Rangers would go on a 54-year drought before winning in 1994. It is the only time they have won the Stanley Cup in the last 80 years.