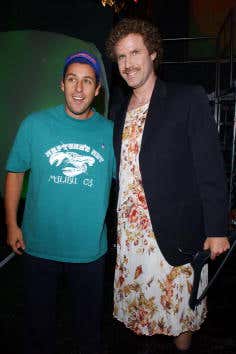 We were just getting the hang of this quarantine thing. After a month of dicking around it was finally clicking with most of us. We were staying inside, Zoom was our window to the world, we're finding out which of us know what color the outside of a cooked steak should be. We were managing. And then, from the clouds, ESPN dropped this bomb on us and ran for the hills.

Without sports ESPN is a rudderless ship. They don't know which way is up and tweets like this show that. I understand there are some "Talladega Nights" and "Semi-Pro" fans out there. But "Happy Gilmore" and "The Water Boy" simply outclass everything Ferrell brings to the table in terms of sports movies. It was a bad question, and bad questions beget worse answers. Because folks couldn't leave well enough alone with this. Now I'm seeing tweets saying Will Ferrell doesn't belong on the same level as Adam Sandler for any and all movies.

Never mind the fact that Ferrell gave us a 21st century classic Christmas movie, a toll unanswered by everyone in Hollywood NOT named Billy Bob Thornton. We're talking about the same dude who made "The Other Guys"? That dude from "Old School"? "Anchorman," bro? "Stepbrothers" ringing any bells on this fine evening? Of course they do, because they're timeless classics. And that's not to say Sand Man doesn't have classics on classics as well. "Billy Madison." "Happy Gilmore." "Mr. Deeds." "Big Daddy." That's what makes this debate so treacherous. One not for the faint of heart. Two SNL titans who put the silver screen in their back pocket with such dominance that they've been able to churn out whatever crap in exchange for paychecks off the strength of their old works. Netflix can't pay Sandler enough money for the scripts at the bottom of his trash heap.

I don't think there's a wrong choice here. If you lean Sandler I can see you side, if you pick Ferrell I see where you're coming from and will likely agree with you. The only way you can be wrong here is if you think one doesn't belong in the same breath as the other. And by wrong I mean you've cost yourself decades of laughter and enjoyment by having a dumb and broken brain that hates comedy. It would be like saying you love basketball, you believe Magic Johnson is the greatest of all time but think Larry Bird had no place even making the NBA in the first place.

PS - ESPN has given Will Ferrell TWO ESPYs for sports movies, zero to Sandler. Feels rather disingenuous for them to not advertise that information when they posed this question in the first place. They made their choice a long time ago for them to try and cause such strife with everything else going on in the world today is reckless and dangerous to say the least.