Competitive baseball is back. Even if it's virtual in nature.

In a joint effort with the MLB Players Association and Sony Interactive Entertainment, Major League Baseball is launching the first competitive MLB The Show league featuring players from all 30 teams competing in a 29-game regular season, league sources told ESPN.

The regular season begins Friday and will last through April 28. Games will take place every one to two days with three to five three-inning matchups played each game day. The postseason is scheduled to begin April 30, with a World Series played on May 2. The postseason will feature the eight best teams, with a best-of-three format for the first two rounds and a best-of-five format for the World Series.

MLB, the players' association and Sony will donate $5,000 on behalf of each participating player to a Boys and Girls Club affiliate in their team's community, with the championship player earning an extra $25,000 donation.

I'm sorry for the clickbait headline, but desperate times call for desperate measures, and we are in the click game after all but I will say this - I promise I won't partake in any more clickbait headlines today, at least not until my 3pm Friday afternoon smut blog. Nevertheless, this is cool I guess? Especially since it's for charity; that makes this league all worth it and a lot of these guys are truly characters, so it should at the very least provide for decent enough entertainment in a time when entertainment is almost non-existent outside the gaming world. I'll prolly tune in here and there and root on Gio as he's a good dude, great pitcher and I have NOTHING better to do,

I STINK at that game. I stink to high heaves.  Look at our Barstool League's standings through earlier this week: 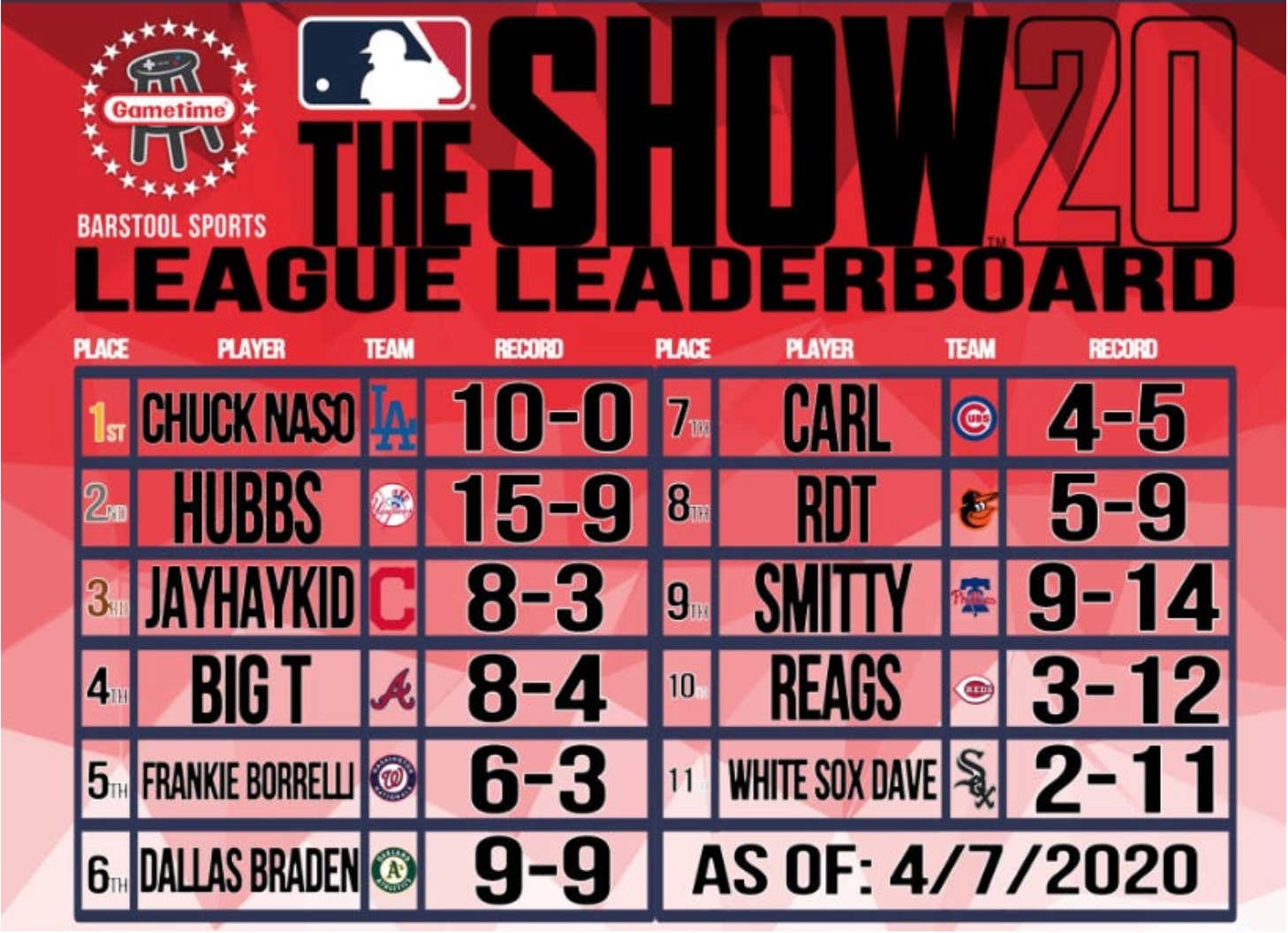 PATHETIC. I know, I know. How can someone as explosive, powerful, twitchy and athletic as me be so bad at a goddamn video game? All you do is push a few buttons!  There's not many things I don't excel at, especially when it comes to anything and everything baseball.

The game play is pathetic. It takes forever for fielders to gather, throw and unless you are perfectly in the green meter thing, it's an error. That and routine popups are dropped on the reg. It's fucking infuriating. I'm convinced that's the only reason I'm not undefeated. The computer routinely fucks me over. Just ask Dallas Braden what happened in our game last night.

No excuses though aside from the computer being an asshole that rigs games against me. The good news is we can flush the first half of the season. Just flush it like a runny shit you take at 8am 3 hours after consuming late night Mexican food.  The playoffs are still within reach and like my good friend Will Smith says, it ain't over until the fat lady sings. FUCK YOU SMITTY!

Link to our daily game coming up soon.