I know some people are going to complain that the customer is always right and all that bullshit but if we're being honest, I absolutely LOVE being talked to like this. And it's not from some weird Treat Me Like A Bad Boy place. Granted I have been a bad boy. But practically speaking I love it because there's no bullshit. This is plain text. Maybe the CDC infographic is too much overload.  Maybe you've been influenced by a religious order that you just need an extra rosary before bed to stay safe. Or maybe you're still recklessly using too much titty money. Whatever the case, there's still a lot of misinformation out there that the public seems to overlook so here's some extremely valid commandments from your friendly neighborhood corner liquor store: 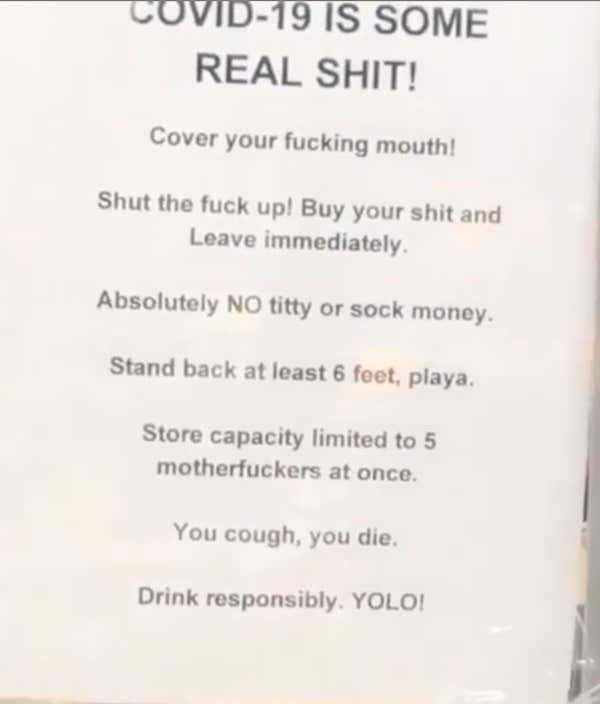 Absolutely electric list here that should be hanging from every storefront across America come Monday morning.

And while there's no duds, I think there's room to reorganize in order of importance. Like if you had to battle 1-7 on keeping things safe around the shop, here's how I'm ranking them:

1. Absolutely NO titty or sock money - I can feel the moist $10 bill now. It's warmer than I anticipated. I didn't know titties sweat like this when it's 52 and windy. And unfortunately the perspiration will be embedded deep into my fingertips for a good 2-3 hours. Should probably just kill me now with those big old floppy titties. PS dare you to trade socks with a bum.

2. Shut the fuck up! Buy your shit and Leave immediately - Probably at the top of my list with or without the global pandemic

3. Store capacity limited to 5 motherfuckers at once - I'm a flat out sucker for a well-timed "motherfucker" and this is no exception. Although you probably want this hanging on the door, the language is powerful and the message is clear. Gotta keep your population under control at all times.

4. Cover your fucking mouth! - hard to enforce but that doesn't diminish the importance. Anyone who has seen Outbreak (now streaming on Netflix) knows the danger behind airborn pathogens solely from the movie theatre scene

5. You cough, you die - I'd slot this one higher, but I can't tell if I'm being threatened or warned. A threat means that they're the ones going to do the killing. A warning on the other-hand is more concerned with your general well-being.  Either way, nobody wants to die. I think it's important we all agree on that while hoping that it's not coming at the hands of the stock boy in back that's reshelving the pink whitney display.

6. Stand back at least 6 feet, playa - Am I a playa or a motherfucker? I think we all know that answer I'm just curious how this liquor store wants me to feel because I'm starting to feel confused.

7. Drink responsibly. YOLO! - This one goes last just because you always close with Drink Responsibly. That's just good common sense right there when talking booze. No one wants to get sued for encouraging dangerous behavior. But at the same time, you also can't forget that you only live once, so you don't want to be a huge pussy. Especially after being potentially threatened with violence while being called a motherfucker. That kind of tone and language isn't exactly setting me up for a responsible night, but then again why am I in a liquor store in the first place?