I'm not sure why, but there ins't a week that goes by that I don't think to myself "I wonder what Wide Neck is up to?"

Maybe it's my appreciation for the gains required for a man to get such a wide neck? Maybe it's because every Friday we dedicate a full episode of Hard Factor to the mess that is The Sunshine State with Florida Man Friday?  I don't know... but what I do know is, this week was no different.

ICYMI - Wide Neck (AKA Damn Wide Neck) is a legendary Florida Man who rose to internet fame back in 2018 after his mugshot went viral on account of the unprecedented width of his neck. I'm talking turtlenecks are completely off the table for this guy. Also he got busted with a drugstores worth of Florida diet staples (see below), it's like the Floridian's version of batting for the cycle.

Recently I was doing my routine check-in on Wide Neck and the #WideNeckGang and not only did I find he's parlayed his infamy into a rap career with his prison release jam "First Day Out" on Spotify (all things considered it's actually not bad).... but MORE IMPORTANTLY I discovered that my favorite Florida Man is offering personalized video messages on Cameo.com... and to my surprise, the reviews are mixed.

If you're not familiar, Cameo.com is the website where you can get personalized messages from your favorite celebrities.

Whether it's a $400 motivational message for your real-estate team from hall-of-famer and dick pic pioneer Brett Favre...

…Cameo has got you covered.

Anyway, when I saw that I could get my very own Wide Neck video message for just the price of a Bota Box I could barley contain my excitement. That was until I started reading some of Wide Neck's reviews..

You've got to give the people what they want… The neck.

I think i'm starting to notice a pattern here.

Not great…  But as someone who believes in second chances and, as I mentioned before, is a sucker for people with unorthodox necks, I couldn't resist.

So what if if he calls me the wrong name? Or if records the video from bed in a completely dark room? As far as i'm concerned a video from Wide Neck is a piece of art, no matter if you can see/understand him or not.

So I filled out the form and sent in my $20, and after a short 4 day wait, I received my very own personalized Wide Neck video…

Honestly, Wide Neck FUCKNG NAILED IT.  Worth every penny. I would have paid $40 easy. He was well lit, well spoken, he stayed on topic, and you could easily see his neck in all it's glory. I don't know what more you could ask for from a Cameo.

Now I just hope that Daddy Long Neck starts doing Cameo's again soon so I can complete my collection. 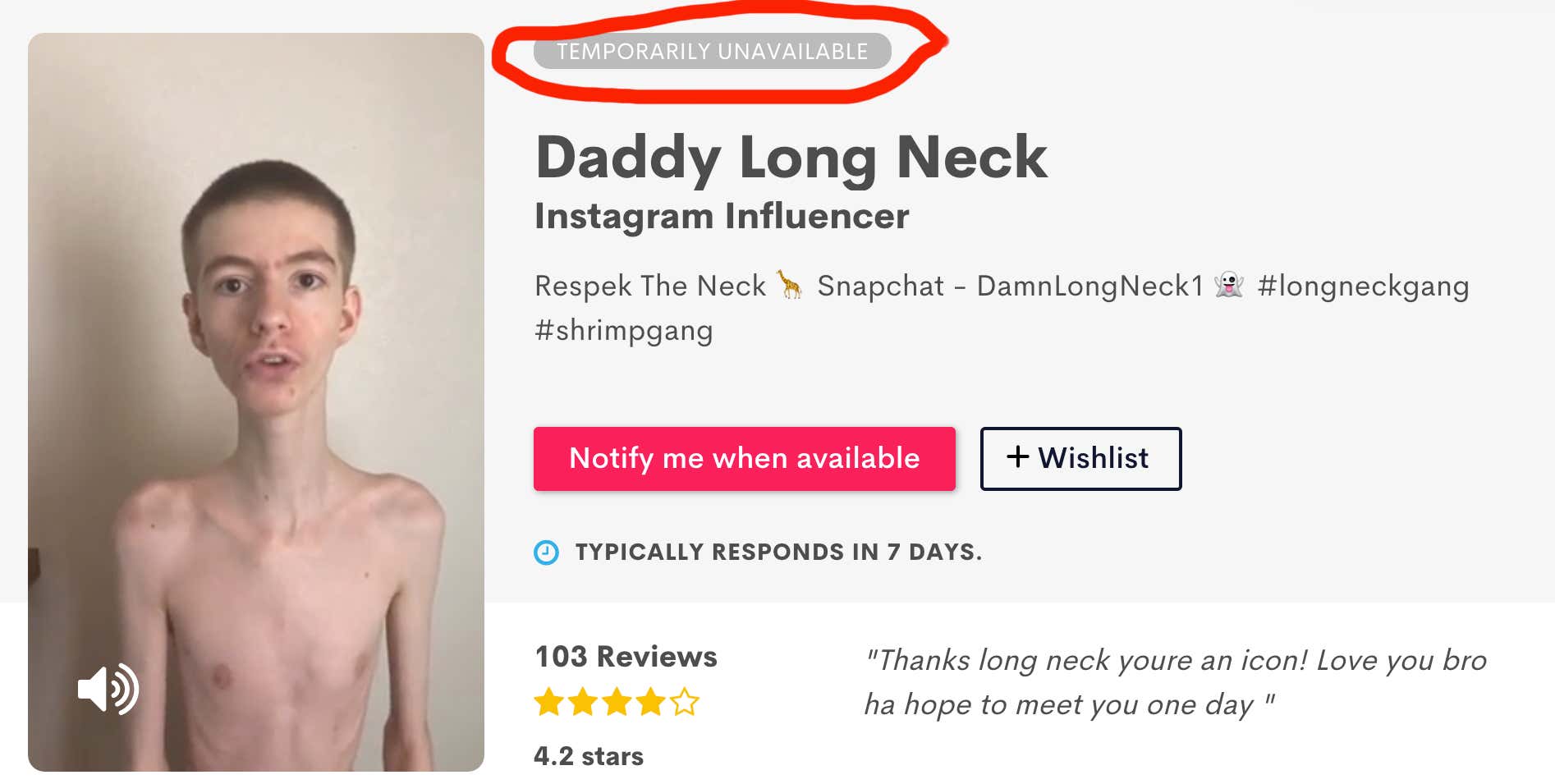