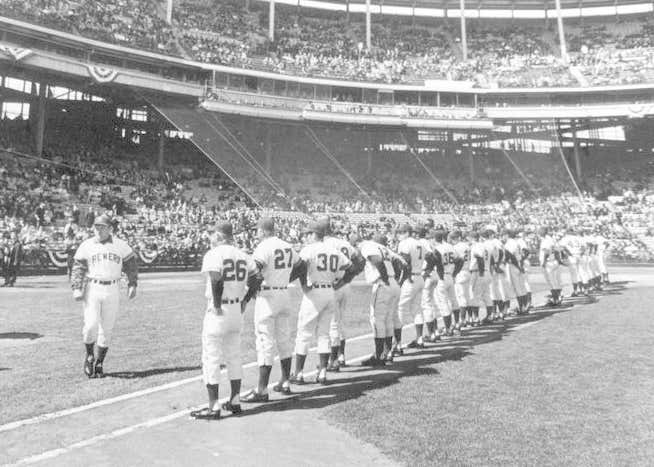 Five years after the Braves left Milwaukee for Atlanta, Major League Baseball returns to Wisconsin as the Milwaukee Brewers play their first game at County Stadium. The Brewers were pounded by the California Angels 12-0. Milwaukee’s return was a last-minute surprise as they began Spring Training as the Seattle Pilots, only getting the go-ahead to move on March 31st when the Pilots were declared bankrupt.

Major League Baseball in Milwaukee dates back to 1901 when the Milwaukee Brewers, a leftover team from the Western League, remained behind before becoming the St. Louis Browns in 1902. A half-century later, big-league baseball returned when the Boston Braves during Spring Training of 1953 moved to Milwaukee. The Braves were highly successful in Milwaukee, winning one World Series and two National League Pennants. Despite never posting a losing record, the Braves moved to Atlanta in 1966, leaving Milwaukee heartbroken.

Over the next few years, Bud Selig, a used car salesman who had been a minority owner of the Braves, tried to land an expansion team. When those efforts failed, he attempted to lure away the Chicago White Sox, who played several regular-season games in 1968 and 1969. At the same four new expansion teams joined American and National Leagues in 1969. Those teams were the Montreal Expos, San Diego Padres, Kansas City Royals, and Seattle Pilots.

The Kansas City Royals and Seattle Pilots were the American League expansion, teams. They were initially going to be added in 1971. However, pressure by a Missouri senator Stuart Symington rushed the process. The city of Seattle was not prepared for a team in 1969 as they rushed to expand the capacity of Sick’s Stadium, a minor league field, that could not handle the added capacity. The Pilots would finish last with a record of 64-98 in 1969, as the team’s finances collapsed.

When the Seattle Pilots arrived in Spring Training in Tempe, Arizona, in 1970, the future of the franchise was up in the air. The team had been and out of court all winter. Dewy Soriano, the team president, had brokered a deal to sell the Pilots to Bud Selig with the intent to move to Milwaukee. Owners approved the move, but the State of Washington filed an injunction to keep the Pilots in Seattle. Local ownership groups tried to save the Pilots, matching the $10 million offered by Selig. However, the deal fell through when a bill came due on a $4 million loan from the Bank of California to pay for start-up costs.

The City of Seattle made one last attempt to save the Pilots, as Westin Hotels offered to operate the team as a nonprofit organization.  Baseball owners rejected that proposal fearing it would devalue all teams in Major League Baseball. The Pilots meanwhile went into bankruptcy court, as the team had tentative approval to move to Milwaukee. When it became clear that the local ownership could not reach payroll, it became clear that there was no saving the Seattle Pilots.

As spring training came to an end for manager Dave Bristol the Pilots an equipment truck left Tempe to head north, stopping in Provo as the final court date was held on March 31st. While in Provo, the truck awaited instruction, when it was ruled that the Pilots were bankrupt, the truck was given the go-ahead to move on to Milwaukee.

With just seven days between the ruling and Opening Day, the Seattle Pilots uniforms were switched over to the Milwaukee Brewers with the same color blue and yellow scheme. The name Brewers had been used by minor league teams in Milwaukee since that first 1901 team. The new Brewers would adopt the old Barrel Man logo used by those minor league teams.

With just a week to sell tickets, the first game in Milwaukee was not a sell-out as 36,107 fans were in attendance at County Stadium to see the Brewers host the California Angels. Lew Krausse made the start for Milwaukee, as Andy Messersmith was on the mound for the Angels. Krausse pitched just three innings, allowing four runs as the Brewers were crushed 12-0. Messersmith got the win for California, allowing four hits as he tossed a complete game, striking out 11 batters. Steve Hovley collected the Brewers' first hit, with an infield single in the second inning.

The Brewers would lose their first three games, before beating the Chicago White Sox 8-4 on April 11th. Milwaukee would finish tied for fourth with the Kansas City Royals in the American League West, posting a record of 65-97. Seattle would get a second chance at expansion in 1977, with the birth of the Mariners.