This story is WILD. From top to bottom, I can't remember a military story like this in a long, long time. We've covered it pretty extensively on the blog and on the podcast, but here are those links if you wanna catch up.

Now for the new shit. The Acting Secretary of the Navy flew out to Guam where he met with some 3500 sailors still onboard the USS Roosevelt, another thousand or so members are also in Guamian hotels being quarantined after nearly 200 of the sailors tested positive including the Captain in question. Captain Crozier tested positive over the weekend and is still experiencing issues related to coronavirus. That didn't stop the Acting Secretary. He'd didn't take a pause. Nope. He flew out to Guam to essentially roast the beloved former commander and call into question his leadership and intelligence.

Here are the full remarks that someone on the ship sent to me. They recorded the conversation and then transcribed it. Other portions of the remarks have been released elsewhere but as far as I know, we are the only ones who have the complete... uhhh.. ship-wide counseling session from a clearly pissed off Navy Secretary. 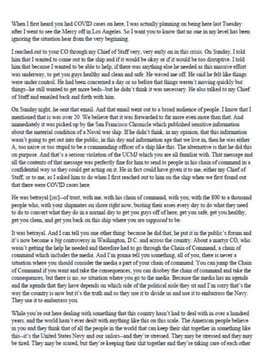 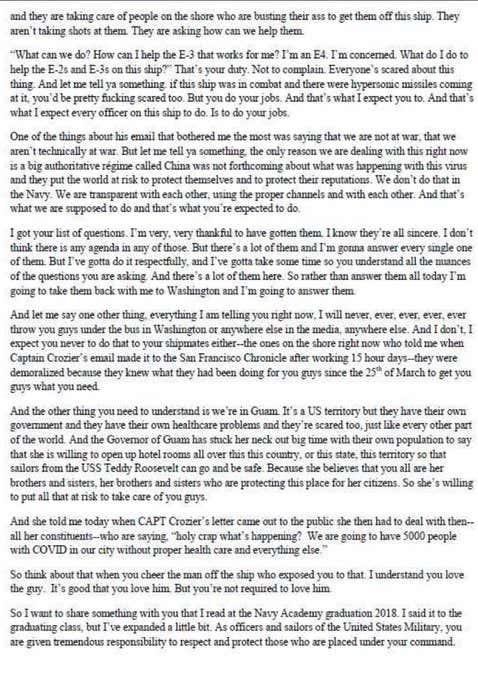 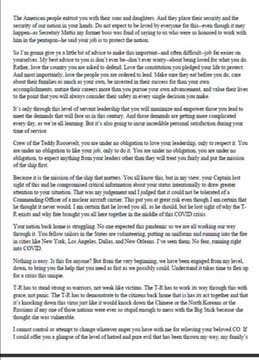 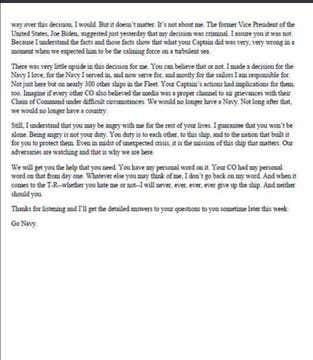 I cant tell if that's fuzzy because I have banana-induced pink eye or if it came through clear. Just in case, here's ZBT's tweet with the clear images because I think my monitor is fucked up. I blame Pete for that as you all should. Oh well. The blog keeps rolling.

This story is unreal. If you wanna get the zbt squad's full thoughts, here's the episode about it. We'll be recording today with more updates. This is like keeping up with the Kardashians but it's on the high seas on a nuclear-powered aircraft carrier. Bananas. Chiquita bananas.

We also talk about a bunch of other shit. Listen, even if you arent a military bubba or sissy.