I got way too much time on my hands right now, as we all do, so I'm gonna prove this dickhead on Reddit wrong right now. But first, just know that I used to get all my Barstool updates via reddit because Barstool was blocked at my old job. I couldn't even look at it on the app because the app was blocked if you were connected to our wifi, and I wouldn't get a signal on my phone if I wasn't connected to it, so reddit used to be the majority of my Barstool intake, for better or worse.

I don't go to the reddit near as much as I used to anymore, but I do like yucking it up with them from time to time because it's the most diehard of diehard stoolies, and that's what I consider myself first and foremost. Then Carl and Kmarko got into that little twitter spat earlier in the week so I figured I'd go check out what they had to say about it since they know exactly what the behind the scenes relationships are around here.

But there was a comment that said Carl went at our Commander in Chief Erika previously. I felt compelled to squash that because I didn't want that narrative floating around.

You can read the thread here.

In the meantime this dude chimes in and asks this question:

The condescending "lol" at the end of the question made me insinuate that he was being sarcastic and thought my "take" was dumb. I've said it a million times, but I'll match wits with anyone when it comes to baseball. I might not always be correct and I'll concede when I'm wrong, but I'm fully confident in my acumen when it comes to that game. It's the one thing on earth I can be confident in a lot of the time.

So anyways, I responded with this: 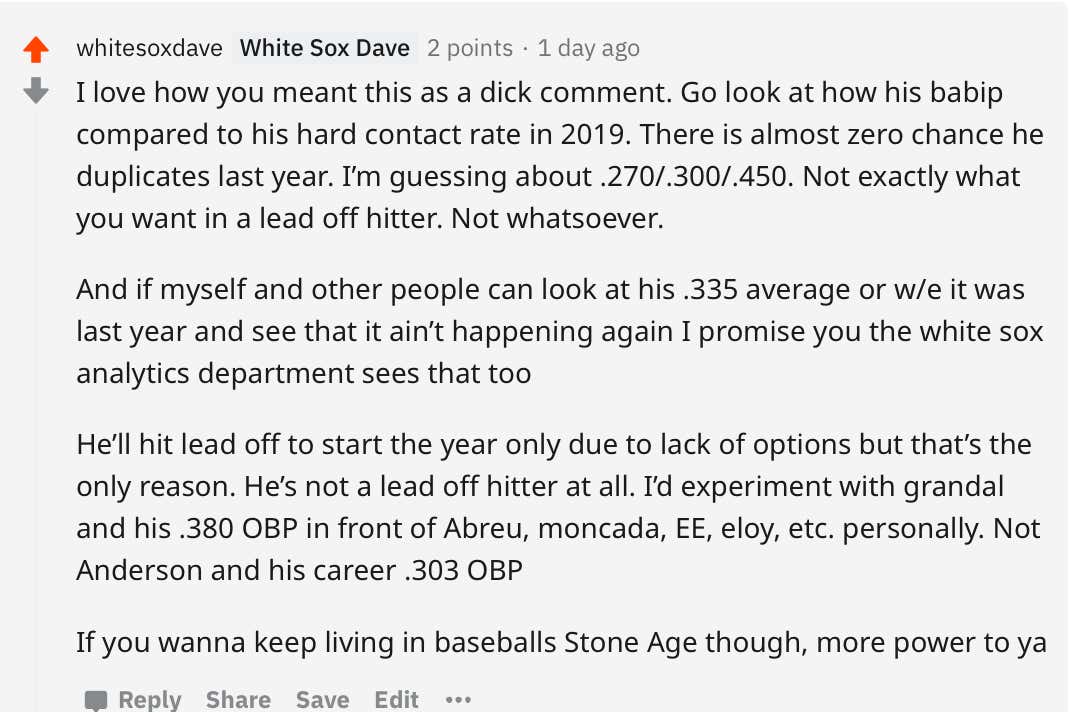 to which he eventually responded with this:

I would have loved to have a civil conversation with him about this, but he was a dick, so I'm going to be the biggest loser on earth and do a bunch of research to prove some anonymous dude on Reddit wrong.  Again, I got NOTHING but time on my hands.

But Tim Anderson's career OBP is .303. He got on base at a .357 clip last year, about the average of all leadoff hitters, in spite of leading the league in hitting. That is HARD to do. If he walked at an average clip, his OBP would be around .390, but he doesn't, so it wasn't.

That said, Anderson was also 2nd in baseball in BABIP last year:
In spite of having a below average average exit velocity:
Which says he was finding holes and a LOT of them with SOFT contact. A lot of cheap hits, and cheap hits don't carry over over time. They normalize, and a safe bet would be for him to return to his career norms at least somewhat in 2020.

So.... yes, I'd rather have Grandal leading off because he's shown he can get on base way more frequently. Leadoff hitters see more plate appearances than anyone, and the more often the leadoff hitter is on base, the more often EE, Abreu, Moncada, Eloy, Mazara and Robert can drive them in.

YOU CAN'T SCORE IF YOU'RE NOT ON BASE and unless everything goes to shit for Grandal and Anderson continues with his way too abnormal BABIP, Grandal should lead to more scoring opportunities for the White Sox leading off than Anderson should, and guess what? You win games by scoring as many runs as possible. It's very simple math.

But I'm just a bumbling idiot who can't talk and chew gum at the same time. Nobody takes me seriously as you say, so don't take it from me or the stats I've provided, take it from mathematicians:
That said, the White Sox will probably hit Anderson leadoff to start 2020 in hopes that some of his luck carries over from 2019, and by the time his luck inevitably runs out, hopefully Robert or Madrigal have proven they can handle that role. That's a big gamble though, and one I'd prefer they don't make. Grandal has never really lead off (only 14 times in his career) and there are things that stats don't measure I.E. a player's comfort level hitting in any given part of a batting order. If Grandal isn't comfortable hitting leadoff, I don't want him there. But I don't know if he does or doesn't, so I'm just using pure math to construct what I think the best lineup possible is, and that lineup will never include Anderson at the top of the order.

Grandal's not a perfect option, but they don't have a perfect option right now. That said he's a MUCH better option than Anderson. Again, the more people are on base for the meat of the White Sox lineup, the more they'll score. 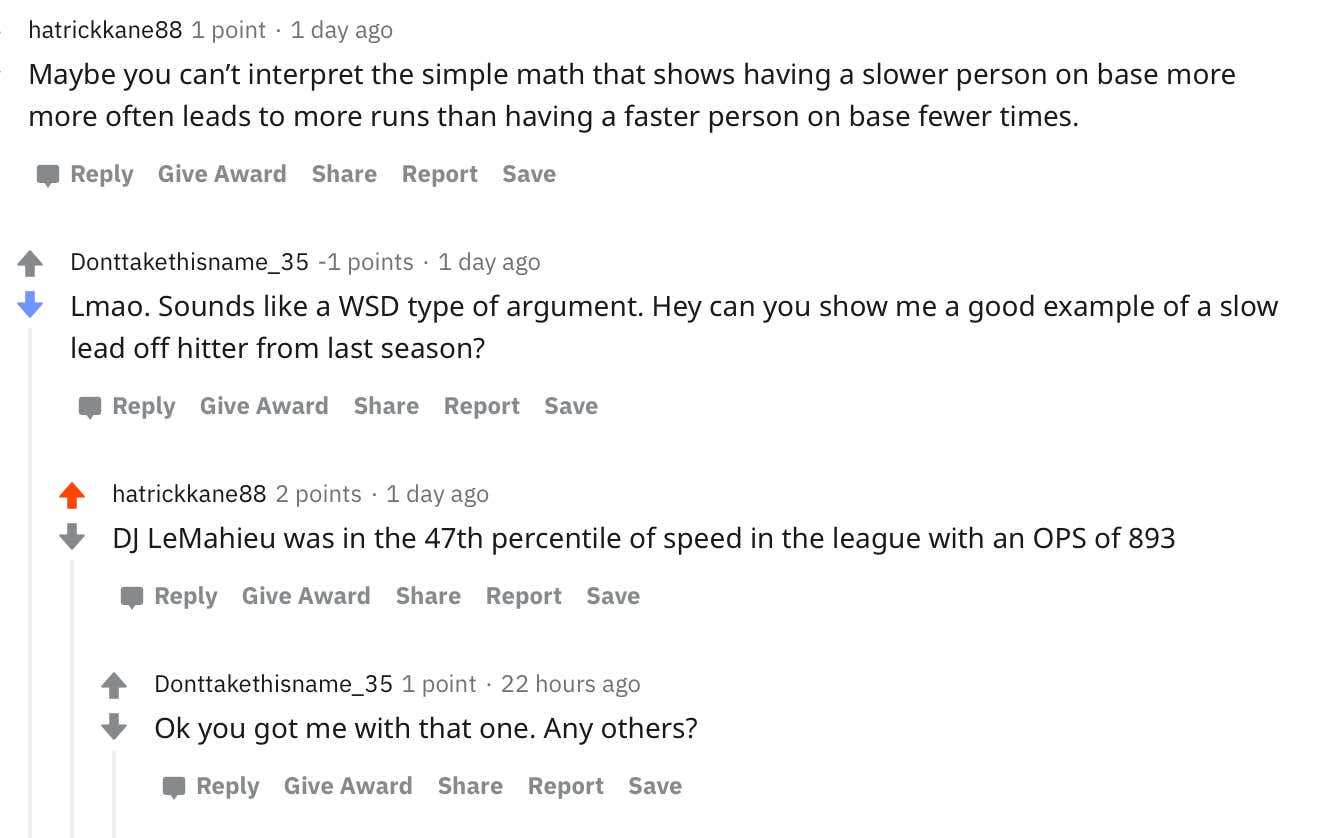 Here's another, the Cubs just said Kris Bryant is going to hit lead off should we have a 2020 season and experimented with Schwarber there in 2017 or whatever year it was for the exact reason that HE GETS ON BASE A LOT.

If you want to go on about this, let me know. I could go all day. I got NOTHIN but time on my hands, and yes, I feel like a total dickhead for taking an hour and a half to write a blog to prove some random dude on reddit wrong.
white sox+ 8 Tags