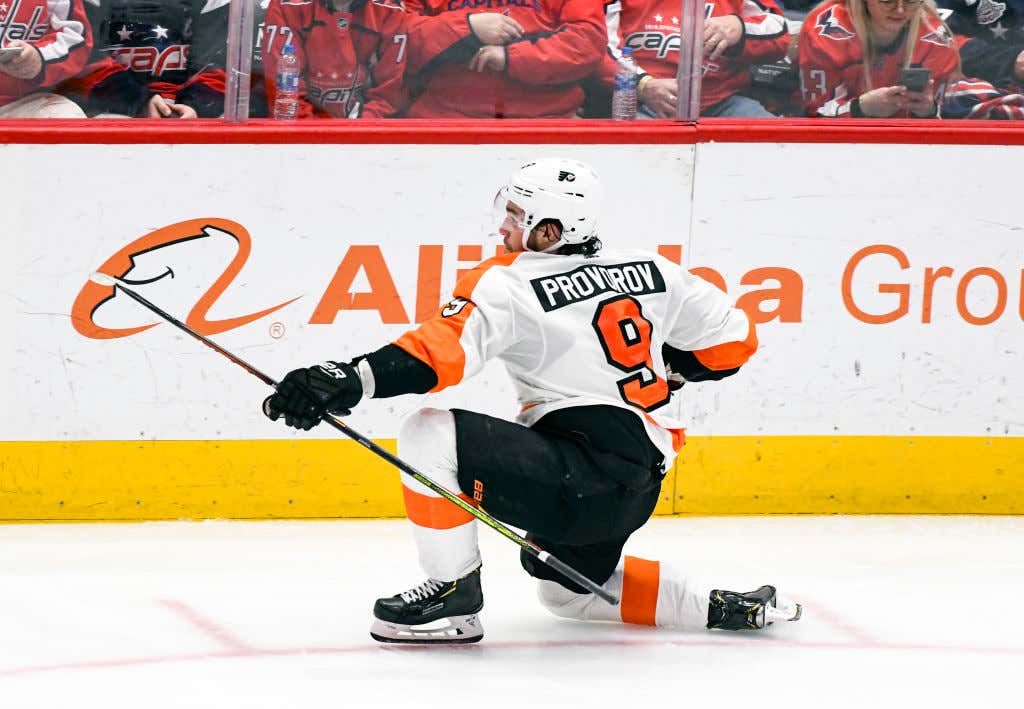 Here's a fun little fact for all you boys and girls back home. Ivan Provorov had a goal and an assist last night. Alex Ovechkin had zero points and was a -2. Ilya Kovalchuk had zero points. Evgeny Kuznetsov had zero points. And while Dmitry Orlov may have deflected a puck into the net last night, it was on his own net so he ended the night with zero points.

You've got newcomer Derek Grant putting the type of touch that Messi could only dream about on this kick pass to The Best One on the back door.

And speaking of newcomers, you've got Nate Thompson dropping the mitts and chucking them with Tom Wilson.

I wouldn't score that a victory for Thompson but he held his own and got the takedown, which got the boys buzzzzzzzin. Keep in mind that the score was 1-0 Caps at the time of the fight and then the Flyers went on to score 5 of the final 6 goals of the game. That's how 44 can make a difference out there. Huuuuuge team guy. Chuck Fletcher didn't go out at the trade deadline to try to pick up the biggest pieces. The man was on the hunt for the right pieces. Between what we've seen from Thompson and Grant so far, seems like he crushed both of those.

Oh and speaking of fighting Tom Wilson, shoutout to Robert Hagg for defending the captain after that piece of shit took a dirty run at Claude approximately 85 seconds after he had gotten rid of the puck.

And again, look at the score there. The Caps had just scored to make it 3-2. Could have rode that momentum into intermission and came out to tie it up in the 3rd. Instead, that piece of shit Tom Wilson tries to run Claude and then the Swedish meatball Robert Hagg is there to make him answer the bell for it. For sure not a win on the fight for Hagg but that's not what its about. It's about how tight this team is right now. If someone takes a run at you, you know for a fact that one of your guys is going to be following up less than 2 seconds behind ready to cave their face in. They're dummying teams on the scoreboard, they have each other's backs, and even the Hockey Gods are looking out for them right now.

It never has and it never will.